I actually got some gaming done at this convention, but there’s no need to break them out into separate posts.  I’ve included links to the requisite screen shows– see the yellow backgrounds.

As reported in the earlier travelogue, I drove up to Fall-IN! 2014 in sunny Lancaster, PA on Thursday. It was raining off and on but I made excellent time. People were already congregating when I arrived, around 3PM. For some odd reason, I walked into a low hanging duct cover in the Men’s room and clocked myself good.  The pain was sharp and intense– if I were a cartoon, I’d have had tweety birds circling my head.   Not a grand manner to start a convention with.  My room was palatial, by Host standards.  No complaints there, but the halls were in poor shape–

Much as I enjoy the Host’s location and admitting I have had a grand time in this venue for many years, I’m beginning to think the writing is on the wall for this venerable building.  there were multiple leaks all throughout the building and the water went out on Sunday.   It made me think of a Cold War era Eastern European motel, not central Pennsylvania.

The convention was manned pretty well, all things considered.  Dan Murawski was at his wit’s end getting staff at the last second, and thought it did not bode well– as if it were being purposely sabotaged.  Dan’s got a big heart and works his butt off for these things– but unless I see better proof than what I heard, I think it was just a confluence of events that caught him flatfooted.  It happens sometimes– that’s how I started volunteering back in the mid-90s.. I didn’t even realize you COULD volunteer until JT Thomas was caught flat-footed in a similar fashion and put the call out for volunteers.   So, the bright side of things is we got some new faces and maybe they’ll work for other conventions, too.

Thursday I didn’t do much– had dinner with JT, Bob and Cleo and then played some boardgames with friends.  As you can see, scheduled miniatures games weren’t exactly covering the ground Thursday night, although there were plenty of pickup miniatures games.  Friday it turned out I wasn’t really needed in the AM, so took Bob, Cleo and Stephen Gibson to the Knight and Day Diner in Lititz, PA (about 8 miles from the Host, easy to get to).  Prices were great, the food was great, the service was friendly and the company affable. 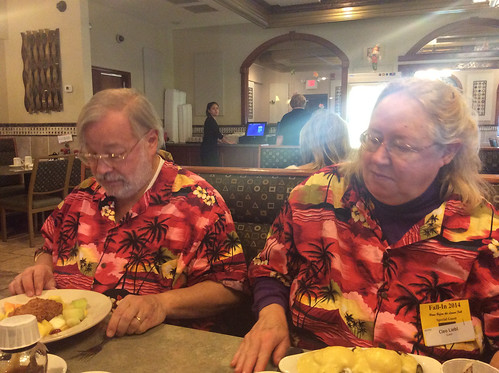 Friday miniature games were kicking into gear by the time we got back.  The Distelfink was humming and games were setup and playing.  For all of that, the room was still somewhat sparse for games and there were the usual open tables.  I don’t see anything dire in this, it’s just a matter of scheduling. 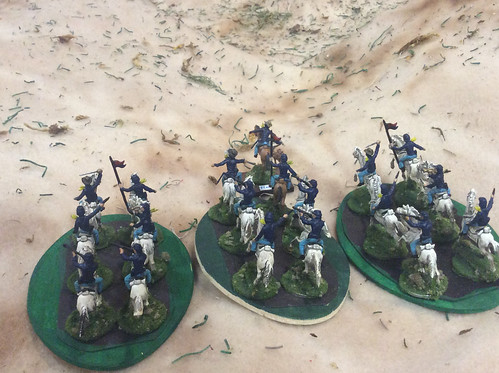 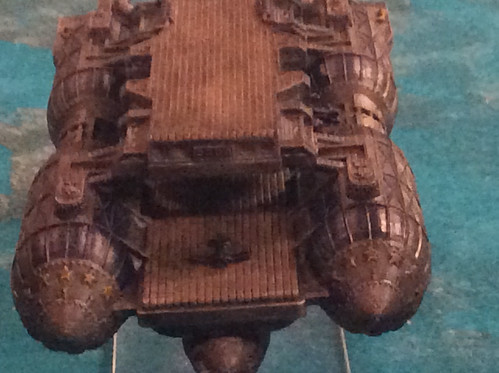 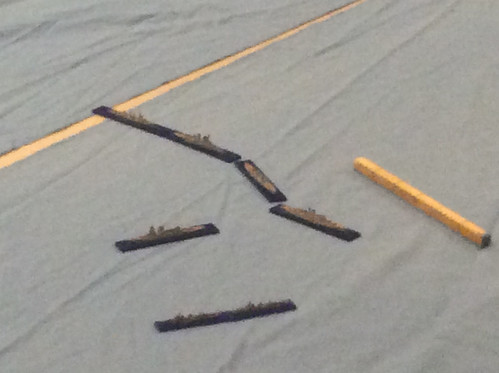 I did do a serious shopping jaunt at this point; I didn’t have a game until 1700 and was footloose and fancy-free. As was indicated in my road trip post on the way up, I had set my sights on some very specific items that I was looking for. I achieved most of my goals. I picked up D&D ATTACK WING (starter set) from Whizkids, plus the Green Dragon and the Arbelest team. Why? Well, I think this is a natural from my Summer game camp– they love X-Wing and this game is different enough that I can run both in one week or all of them simultaneously if I have the kids for it. It’s huge and colorful. I also picked up IN MAGNIFICENT STYLE (continuing my love for VPG games), which is a very miniatures-like game of the final moments of Pickett’s Charge on the third day of Gettysburg. More on that one later. I also got “Steampunk Soldiers” from Dennis. Gorgeous color plates.

After that, my first game of the con:

I really had a good time with the Hammerin’ Iron 2 game.

I went a little long with that game, so hustled to the Prime Rib dinner at the Host Restaurant, once again, with Bob, Cleo and JT.  That was a very pleasant dining experience which goes to show you the old place is capable of putting in a good effort.  It was too late to really bug someone to get into a game Friday night but I did meet up with some of my droogs and we played a boardgame called AMONG THE STARS, which is sort of a “build a big space station” game that involves deck drafting, hand-swapping and bidding.  I really enjoyed it and thought the card art was fantastic– very thematic.

If I were the early riser type, I suppose I could get up, take a cold shower, do 200 scrunchies, and jog ten miles before jumping into an 0800 game start so I could squeak one in before my afternoon obligations.  I suppose I could, but I’m not that kind of gamer.   Instead, I laid around in indolent sloth and went down to the Flea Market for a sniff around.  I had read the rules for In Magnificent Style the night before and now had it in my head to build a version with 15mm painted ACW miniatures– something I knew I could find in the flea market.  Sure enough, I did, and they were relatively affordable.

Mission accomplished, I thought.  It looks much better with actual miniatures.  I had to re-base the flea market minis at the convention, which I did after a short bath to loosen the glue.  I probably spent more than I ought for a simple visual effect, but I don’t care.

I worked the events desk from 1 to 4 on Saturday.  This was pretty easy duty and consisted of handing out tickets, solving problems and breaking down the events board.  It was slow, but we actually did have an issue to resolve– one GM who had signed up to run 5 games fairly late and turned out to be a no-show.

Saturday was probably the busiest day for games. 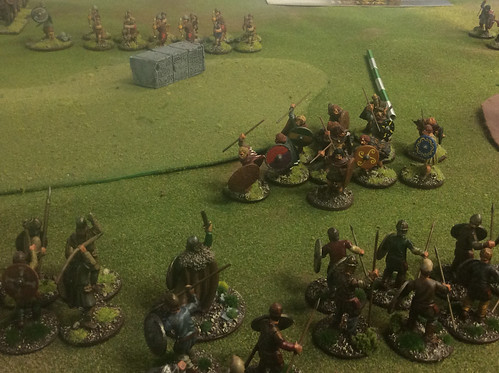 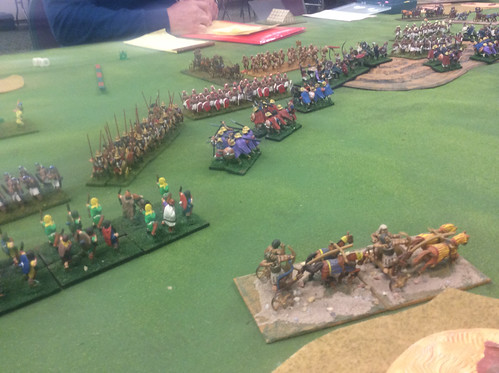 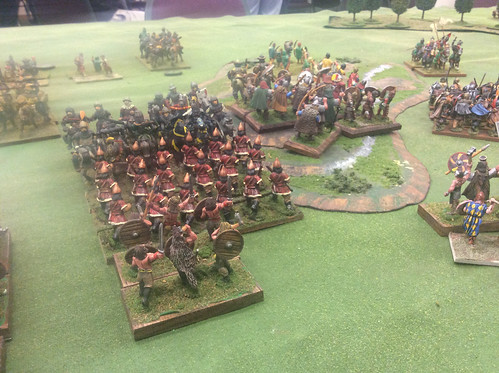 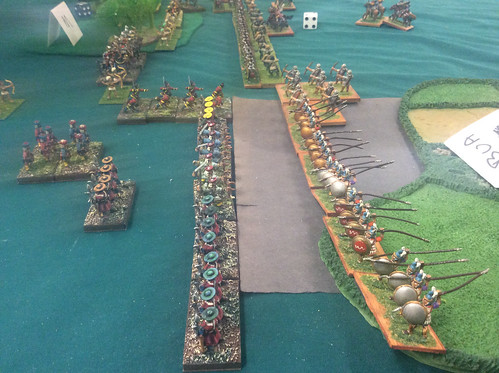 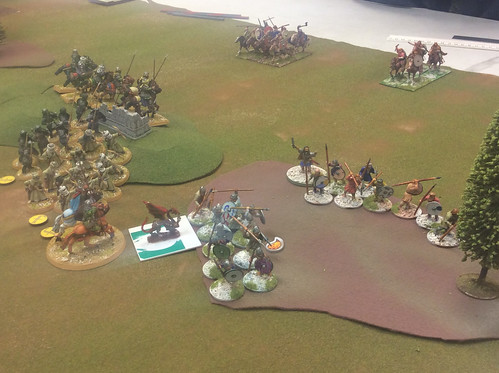 The big Crime/Pulp game in the lobby started early Saturday evening.  This was the showcase game of Fall-IN! 2014.. with scenery so intricate and detailed I’m certain it won some kind of award.  I don’t think we gave any awards out for Fall-IN!, at least I didn’t see the awards committee at work, anyway.  Too bad!

Here’s a few pictures of the 1920s Gangster/Pulp game in the lobby.  They don’t do it justice.  That was a “mob” scene, Saturday!

Having gobbled my “Hall Pig” down (actually Hall Brisket, but who’s counting) to make the Sky Galleons event on time, I felt slightly nauseous so went in search of a glass of milk, which made things better.    I might point out that with the exception of the kind of greasy breakfast I had had in the Vistas that morning, dinner was the most unhealthy thing I ate all weekend– all things considered I did rather well with food– didn’t overeat, didn’t indulge in overly fatty and sugary crap.  It can be done!

After finishing the rebasing of the 15mm Rebs, I headed down to my last event of the evening:

After the Road Warrior was summarily executed and the game ended early, I did something I rarely do these days: Stayed up and BS’d with Neil Brennan and Del Stover, in the Lancaster Host bar, where most business decisions are decided upon: 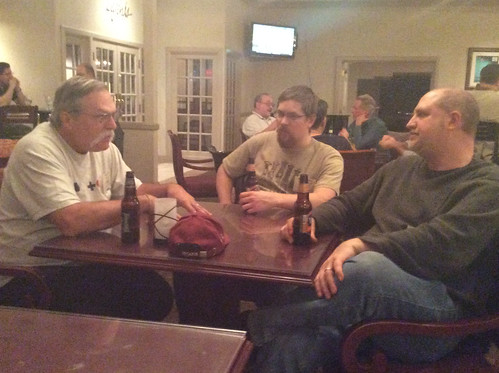 That was a fun session– we were rambling on reminiscing about games in the past and people who have departed.

Sunday dawned with the usual Sunday frantic packing the car activity, visiting the flea market, and dealer hall– with a twist.  I tried to take a shower, no water came out.  No water in the sinks, toilets etc.  Kind of a revolting development with a convention full of gamers.  At least it happened on Sunday!!!

In the dealer’s hall, I picked up BYWATER’S WAR from Clash at Arms.  I also made a command decision and put off buying a starter set for Alien Dungeon’s Mars game in favor of buying some stuff from Stan Johansen’s ROAD WARRIOR line.  What can I say?  That game inspired me.

After that, it was only a matter of bugging out, stopping at Jenny’s for a moody coffee and omlette, and departing…

Another great Fall-IN!  I have to thank Dan Murawski, and all his staff (especially the last minute volunteers) for putting on a great show.  The attendance was very light, I thought, but we’ll see.  That’s too bad– attendance has been growing under Dan’s leadership– I hope the trend continues.