SLIDESHOW of Game Day pictures.. tons of them are Artemisium which I played in

On January 31, 2016, NOVAG threw it’s usual quarterly Game Day, Winter version. The location was the Centreville Library in the multi-purpose room. There were about ten tables in play. I think we had a pretty good turnout considering the recent weather.

Here are a few pictures! 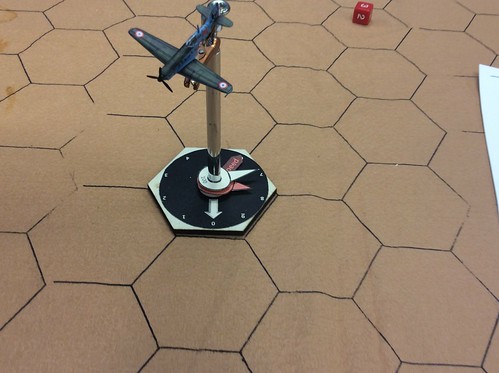 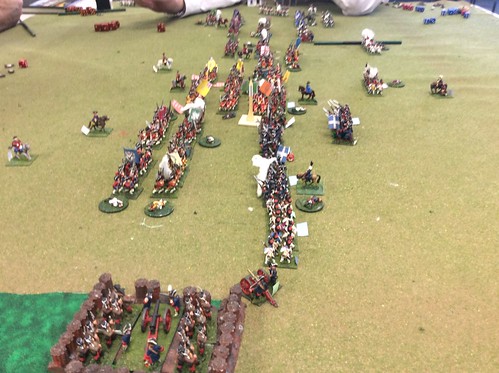 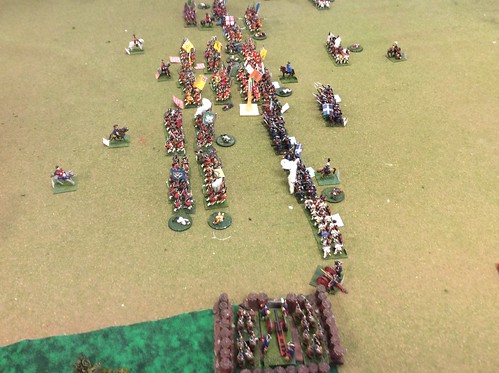 GAME TITLE: Fontenoy
GAME MASTER: Tim Tilson
PERIOD: War of the Austrian Succession
SCALE: 15mmNUMBER OF PLAYERS: 5
RULES: Black Powder
GAME DESCRIPTION: In the spring of 1745, Marshal de Saxe prepared to invade theAustrian Lowlands, and take Tournai. Facing him was an Allied army under the 23 yearold Duke of Cumberland. DeSaxe wanted to defeat the Allied army before starting thesiege. Thus he planned to goad them into attacking him. First he dispatched a columntowards Mons. Cumberland accepted the bait and moved his army there, while deSaxeproceeded to Tournai. Realizing he had been hoodwinked, Cumberland then marchedtowards Tournai where deSaxe awaited him on terrain of his choosing. The French werein an extremely strong +L shaped position, with the village of Fontenoy forming thehinge. The flanks were protected by woods and the river Schedlt. Finally deSaxe hadmade the position stronger with the use of redoubts. At 2:00 a.m. the Allied army wasunder arms and ready to advance. 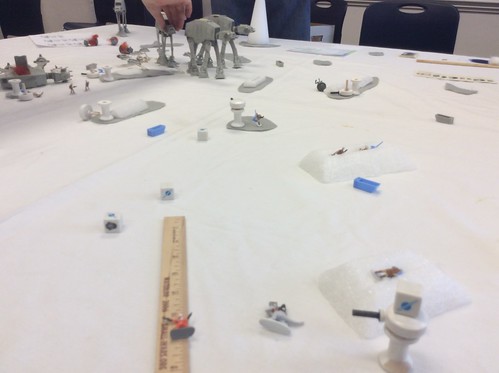 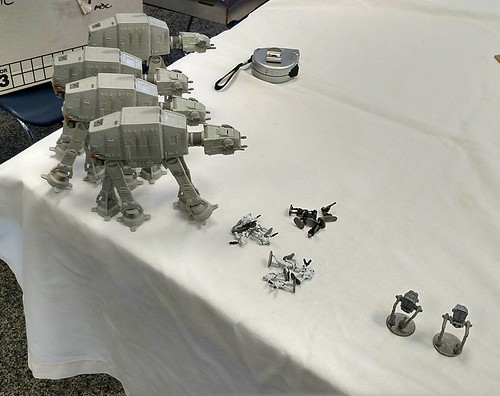 GAME TITLE: Assault on Hoth
GAME MASTER: Phil Pournelle
PERIOD: A Long Time Ago in a Galaxy Far, Far Away
SCALE: Galoob Micro Machines (1/188)
NUMBER OF PLAYERS: 2-6
RULES: West End Game’s Assault on Hoth
GAME DESCRIPTION: Imperial Forces have arrived to destroy the Rebel hideaway on the ice planet Hoth. The only hope for maintaining the rebellion is to use the Ion Cannons to enable transport ships to evade Imperial StarDestroyers. General Veers and his ATAT forces have been dispatched to destroy the Ion Cannon and the defenders of the base. Luke Skywalker leads Rogue squadron in a desperate attempt to delay the Imperial Forces long enough to for Princess Leia to complete the evacuation and escapein the Millennium Falcon. Will the Rebel Alliance survive? Or will the Imperial Forces prevail? Will Luke be captured and turned to the Dark Side? Take 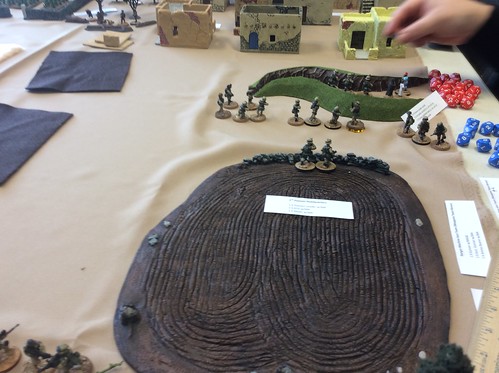 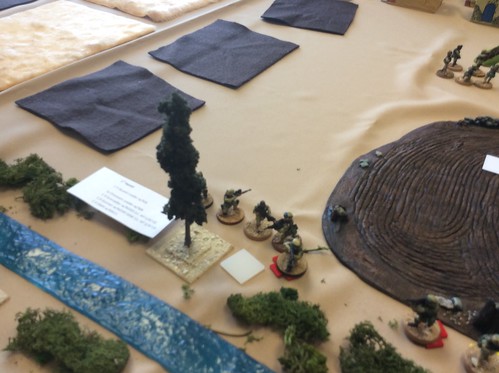 GAME TITLE: Ranger RECCE
GAME MASTER: Michael Byrne
PERIOD: Modern
SCALE: 28mm
NUMBER OF PLAYERS: 6
RULES: Force on Force
DESCRIPTION: With all SEAL teams on missions, elements of the elite Ranger RECCEunit and 3/75th Ranger Battalion were tasked to secure a high value target. Aerialinsertion had not worked in the past, so the Rangers would make their attack overlandfrom a staging point. The terrain was more difficult than expected and the attack startedat day break. Can the Rangers capture the high value target or will he escape again?

(I played Artemisum (bel0w) and took lots of pictures of the game in progress.. see them HERE) 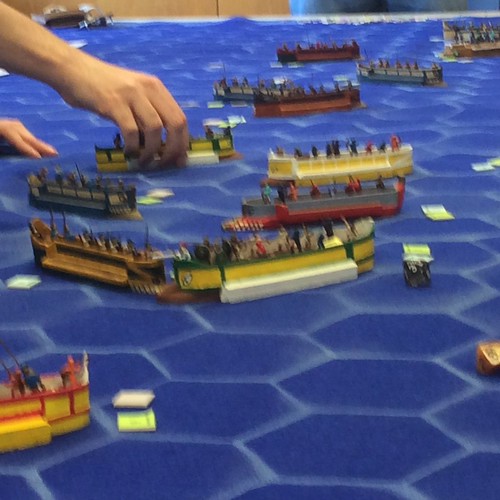 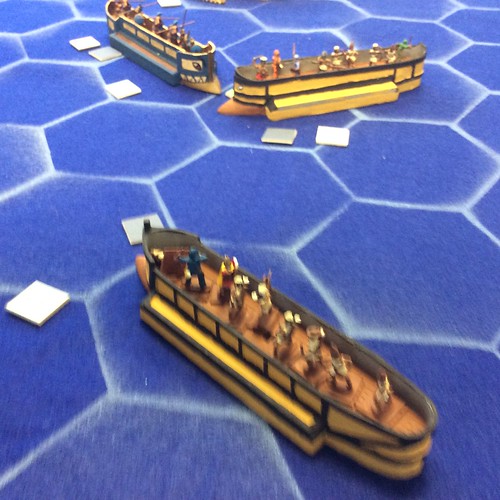 GAME TITLE: The Battle of Artemisium – 480 BC
GAME MASTER: Brian DeWitt
PERIOD: Ancients
SCALE: 15mm
NUMBER OF PLAYERS: 8
RULES: Greeks at Sea
TIME: 2 Hours
GAME DESCRIPTION: The Battle of Artemisium was a series of naval engagements over three days during the second Persian invasion of Greece. The battle took place simultaneously with the more famous land battle at Thermopylae, in August or September 480 BC, off the coast of Euboea and was fought between an alliance of Greek city-states, including Sparta, Athens, Corinth and others, and the Persian Empireof Xerxes I. The Greek fleet was protecting the flank of the army at Thermopylae, whilst attempting to not being cut off themselves. The Persians needed to force their way through either at of Thermopylae or Artemisium to outflank either position. The Persians were at a significant tactical advantage, outnumbering the Allies and having “better sailing” ships. The “better sailing” that Herodotus mentions was probably due to thesuperior seamanship of the crews; most of the Athenian ships (and therefore the majorityof the fleet) were newly built, and had inexperienced crews. This scenario represents part of the first day of the battle when the Persians saw the Allied fleet rowing towardsthem and decided to seize the opportunity to attack, even though it was late in the day,as they thought they would win an easy victory.

Notes on Artemesium.  This was the same game I played at Fall-IN! 2015, run by the same GM (Brian DeWitt) using the same rules (Greeks at Sea).  I chose Persia this time.  We started out trying to have a plan, forming a line moving down the table, but that didnt’ last long as the Greeks burst into our formation.  It was an embarrassing start for the Persians as my left wing took some casualties from boarding and capturing.  I lost two ships to capture — the Greeks get elite marines, and my opponent always seemed to have a “Fierce Marines” chit and a 1 or 0 initiative chit to use handy.  Shrug.  It is what it is.  Even with only 1 damaged ship left, I did do my duty to Ahura-Mazda and rammed one of the Greek hulls, sinking it.  I then was trying to maneuver around to ram his other damaged hull, and the game was called.  Result was a Pyrrhic victory for our side.  We killed 1 more ship than they killed or captured from us, but they sank the flagship.  I think the rules are great, but tend to favor the Greeks too much.  You just don’t want those Greeks aboard your ship.  Gar played as a Persian as well, and was up against  a kid who was hand picking his initiative chits (perhaps he was confused about blind drawing?) so he always had the jump on Gar with an initiative of 0 many turns in a row.  Still, Gar did some damage on his ships as well, he was no cake walk.  He really enjoyed the game.  More importantly his buds were texting him during the game and he was sending them pictures.  Now THEY want to come to the next game day.  Our job here is done!

Oh, I did make a little movie of Artemesium.. have fun.