An editorial by Geoff Englestein on the Dice Tower podcast reminded me of the view the Gautama Buddha took towards frivolous activities, namely gaming, and how they could be a roadblock to achieving true enlightenment.   That got me to thinking of Games mentioned in sacred texts, particularly boardgames as Miniature Wargaming, RPGs and Videogames are all relatively modern developments.

First, back to Buddhism as well as a shallow dive into some Hindu texts.

The Gautama weighs in:

His list of “best practices” for one seeking enlightenment is contained in the he Brahmajala Sutta, one of the first of 34 suttas (collections of aphorisms) of the Digha Nikaya (the Long Discourses of the Buddha).   Games are especially enumerated in the 17th precept of the Majjhima Sila, which lists 16 of what were interpreted as “games” back in ancient times.  It’s an illuminating list but much of it entails condemning playing with toys.  The boardgame specific ones are as follows:

1. “Games on board with 8 or 10 rows”.  This probably references Ashtapada specifically, which is a pre-chess game played on an unmarked, checkers-like gridded board with no colors.  The game was essentially a race between both sides to thread through a preset pattern of “castles” on the board.   Chaturanga is played on an identical board, but is more chess like.

2. “The same games played on imaginary boards.” (Akasam Astapadam was a variant of Astapada which was played without a board, mentally, and means “Astapada in the sky”).  It was either a fun mental exercise or perhaps people were too poor to afford game components.

3. “Marking diagrams on the floor such that the player can only walk on certain places”  may sound a little clumsy, but parse it out and you have a precursor to our modern game of hop scotch.   Not exactly a boardgame but it’s amusing to see it on the list.  The reference is probably to a game called Parihâra-patham, which played similarly to hop scotch but with a very different path on the ground.

4. Either remove pieces from a pile, or adding pieces to it, with the loser being the one who causes the heap to “shake”.   This sounds like Jenga to me, but it could also be Pickup Sticks.  Not much else is written about it. 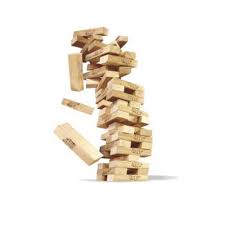 5. “Throwing Dice”  There are any number of dice games originating in India, but this probably specifically references gambling games similar to craps.

6. “Dipping the hand with the fingers stretched out in lac, or red dye, or flour-water, and striking the wet hand on the ground or on a wall, calling out ‘What shall it be?’ and showing the form required–elephants, horses, &c”  That sounds somewhat confusing but after you parse it for a bit it starts to sound a lot like modern Pictionary, doesn’t it?

7.  Ball Games.  Could mean anything really, but probably something like Kick Ball.

(8-14 reference playing with toys, but 15 is interesting)

15. Guessing another person’s thoughts.  This could be just wild guessing but I suspect it’s a game with directed questions similar to 20 questions.

So there you have it, The Buddha wasn’t a game guy like you or me.  I’m not a scholar of Buddhism but I have read a little here and there, and I suspect the Buddha wasn’t condemning leisure pastimes with any degree of vitriol, he was simply listing the activities to be avoiding as being harmful to spiritual discipline along the path to enlightenment.

The Buddha’s list is relatively well known, and an interesting window into the past, especially about boardgames.  I could see playing variants of some of these today, and actually I have (Chaturanga, for certain, is a fairly famous variant of Chess).   I wondered if there was any other religion that even mentions diversions of the mind with such precision as the Guatama Buddha did.

A ritual dice game is mentioned in the Yajur Veda, to be played at coronations (and it is mentioned in passing that the King was allowed to win).    Other than that I can’t find much in the Upanishads or the Rig Veda.

Well, the Prophet Mohammed did not appear to enjoy games any more than the Buddha did. In the Koran, specifically this citation, the Prophet appears to equate the playing a game of chance to the consumption of alcohol, which he had strong reservations against:

YUSUFALI: O ye who believe! Intoxicants and gambling, (dedication of) stones, and (divination by) arrows, are an abomination,- of Satan’s handwork: eschew such (abomination), that ye may prosper.
PICKTHAL: O ye who believe! Strong drink and games of chance and idols and divining arrows are only an infamy of Satan’s handiwork. Leave it aside in order that ye may succeed.
SHAKIR: O you who believe! intoxicants and games of chance and (sacrificing to) stones set up and (dividing by) arrows are only an uncleanness, the Shaitan’s work; shun it therefore that you may be successful.

To clarify, later on, Mohammed did state that “He who played chess is like one who dyed his hand with the flesh and blood of swine” which appears to lump in boardgaming with other enticements of the flesh. Reference here.

I’m not going to find a lot of material about ancient Islamic games, I think.

Judaism and by extension, Christianity

There’s not a lot written about ancient Jewish kids’ games, although there is some:
Zec 8:5: “And the streets of the city shall be full of boys and girls playing in the streets thereof”; and Gen 21:9 margin, where we read of Ishmael “playing” (metscheq).

Perhaps this “playing” reference could be read as “Mocking” as well, the translation is open to question.  Of specific games however.. there’s almost nothing at all in the Old Testament.

Playing with ball is alluded to in Isa 22:18: “He will …. toss thee like a ball into a large country,” possibly this indicates some form of organized sport or recreational outdoor game.. The question of Yahweh to Job (41:5): “Wilt thou play with him (the crocodile) as with a bird? or wilt thou bind him for thy maidens?” suggests that tame birds were some form of amusement for Hebrew children.

The New Testament has one reference to children’s play, namely, the half-parable about the children in the market-place who would neither dance to the flute as if at a marriage feast nor wail as if at a funeral (Mt 11:16 f parallel Lk 7:32).

Dice games: dice were known to the ancient Egyptians, and Assyrian dice have been found, made of bronze with points of gold, but there is no trace of them in the Old Testament. The New Testament’s most famous game of chance, the use of dice by the Syrian soldiers who cast lots for the raiment of Jesus at the cross (Mt 27:35 parallel Mk 15:24; Lk 23:34; Jn 19:24) may have been dice (as we know them, six sided cubes) or some other primitive chance mechanism.

This is not to say that the Ancient Hebrews and early Christians were a dour lot; they amused themselves in a myriad of ways– dancing, mimicry, storytelling, running and archery contests.  Even though there aren’t references to them in holy scripture, ancient games did exist in Jewish (and by extension, Christian) culture.   Hebrew children had a tradition of a game called Kugelach, which is very similar to Jacks.   The Ancient Hebrews also seemed to be fond of variants of the grid-based games that were similar to ancient Roman style games (reminiscent of 9 Man’s Morris) as well as Indian ones like Ashdibada– though who invented what first is uncertain here.    What is fairly certain is that Jewish culture inherited many games from external sources- primarily Roman and Egyptian.  There is some evidence of Mancala style games being imported from African sources, as well as a game similar to Fox and Geese called Dogs and Jackals.

What’s to make of all this?  Mostly that the tradition of boardgames and similar amusements– meaning a physical map to move pieces on with some chance element (probably a six sided dice) would appear to be primarily an Asian development that an amusement-starved world would adopt whole-heartedly as  cultures came into contact with each other and cross-pollinated.

And that perhaps Buddha needed to lighten up a little about games. 😀