Once again, another fun Convention Recap by yours truly. In this instance, Fall-IN! 2015, from the warm, yet leaky embrace of the Lancaster Host resort, Lancaster PA.

Thursday’s child has far to go,

I didn’t have a game to run (though now I wish I had). So I checked in and started to deal with an immediate problem with Guidebook for FALL IN! 2015. I had made a last minute insertion update with the data given to me by Events. I had to format the data several times because it kept not accepting it… Now I think there was something going on with the servers right when I sent that because after it worked, we were missing something along the lines of 200 events. I worked through the problem with Guidebook and extracted the delta from the original data, then inserted the delta, which (finally) fixed the problem. I apologize for anyone who was inconvenienced by GB, I assure you, this is the first time I’ve had any problems in 12 conventions of using it, so we’ll just have to do it right for Cold Wars 2015.

I didn’t do a lot of convention stuff Thursday night, didn’t even stay up late in the bar, as it was virtually empty of life. The crowds were just starting to arrive but the place wasn’t packed. I attended the CD’s meeting and tried to stay out of the way, even though I had volunteered if they were short handed. Dan appeared to be short staff on Thursday but all kinds of people jumped in to help with the rush.

So not much in the way of gaming Thursday but I did get a chance to see the awesome set up for SPEAK SOFTLY AND CARRY A BIGGER STICK! by Michale Konwinski and crew. If you didn’t see it, this was that gigantic pulp city in the upstairs lobby. Michael and crew were setting up most of Thursday night, where I managed to do a little quick run through..

(An Ipad isn’t the best camera platform for filming miniatures, so bear with me)

Friday’s child is loving and giving,

Friday I had no plans so I just wandered about and did some shopping. I have got my hands on the raw materials for a game so jaw-droopingly sacrilegious it will offend nearly everyone. More details as they firm up. In the meantime, here’s some clues:

This gave me a chance to jaw with Otto Schmidt, who is a favorite collaborator, and use a range of figures from Sergeant Major that I’ve passed by a few years running with the idea that “there’s a game in here somewhere, it’s just not talking to me yet”… it was fun to get the gears turning on this one.

I did game one official game on Friday. This was “GET THE STONEWALL”, a hypothetical ironclad game (as most ACW Ironclads tend to be). Rule were Sail and Steam navies (from Bay Area yards) which I had tried in the past and most emphatically did not like. However, THIS game went swimmingly, and I’m not saying that because the Union side (which I was on) won. It really did move much faster and more streamlined from the last time I played it, which was Historicon 2015.

I captained the USS Passaic and Patapsco monitors. I smashed the steering on the CSS Jackson early in the game, effectively taking her out of the fight until very late in the game. I didn’t know this, of course. As we neared the Stonewall on dock, it was trying to frantically load munitions and get steam up. Again, all unknowing, I blew up Stonewall’s big gun, leaving her toothless for long range fights. She was still dangerous, so I kept my distance and kept her under fire, and that’s where the GM called it a Union victory. My union colleague lost a ship, as the Rebs converged upon him. Not what I would have done, but hey, there it is.   GM ruled it a Union victory as we achieved our major objective (or would have in a few more turns of pounding the Stonewall).  Even though we lost an ironclad.   I got a prize– the USS Keokuk for my part in the battle.

HERE is an animated slide show of GET THE STONEWALL in MP4 format, with a little accompaniment by Swamp Candy.

There were a lot of great games at FALL IN! 2015, though really I couldn’t grasp if any period or rules dominated.  FROSTGRAVE (by Osprey) is a big new thing, and reminds me of a snowy Mordheim in some respects.  I only saw a few games of it being run but, wow, the terrain was excellent on the ones I did see.  Historically? probably  it was mostly Napoleonics but it didn’t seem as if there were more than usual in evidence.   Lots and lots of pulp games were in evidence, which is probably going to get someone’s panties in a wad somewhere, but there it is.   Here’s a nice screen show of a sampling of games at the convention:

Friday, during the day, the Distelfink was a wasteland, there were many open tables.  They got full up at night, though.  That’s about the extent of any gauge of attendance or participation I did.  I don’t think any game I saw was exactly hurting for people but many didn’t have the full compliment either.

My personal favorite historical spectacle was Bill Moreno (from Good Ground)’s 10mm ‘ Battle of Fredericksburg layout, which deserved whatever prize thingy it go.  He gets much respect from me.  See for yourselves, it looks like a Currier and Ives engraving: 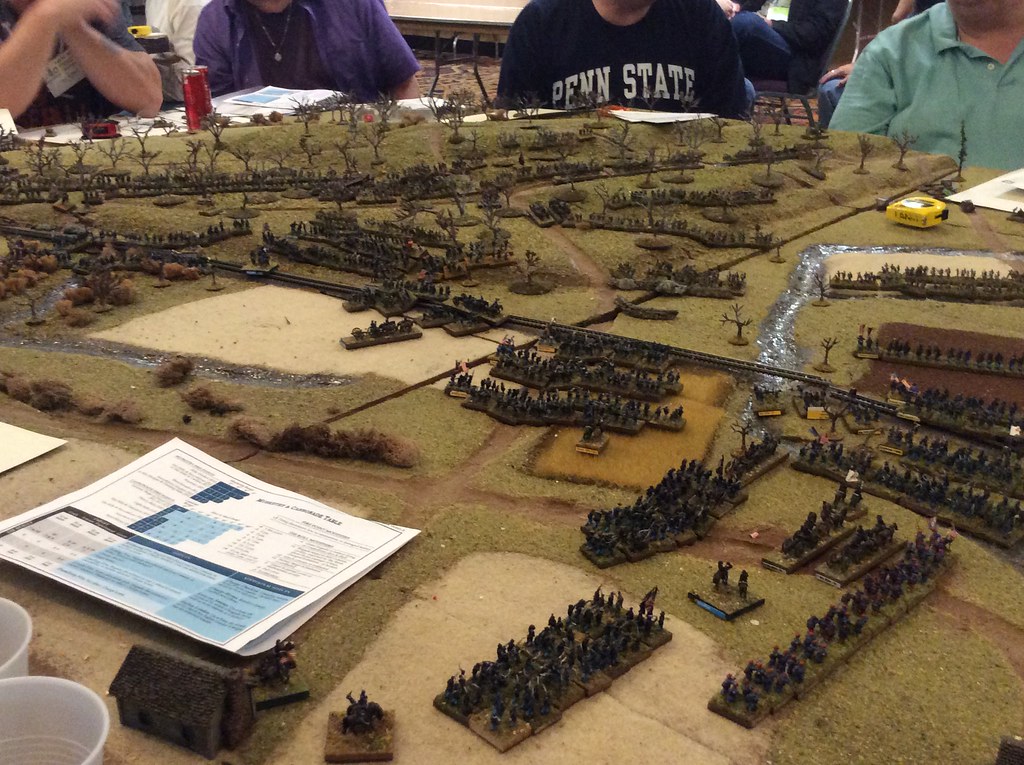 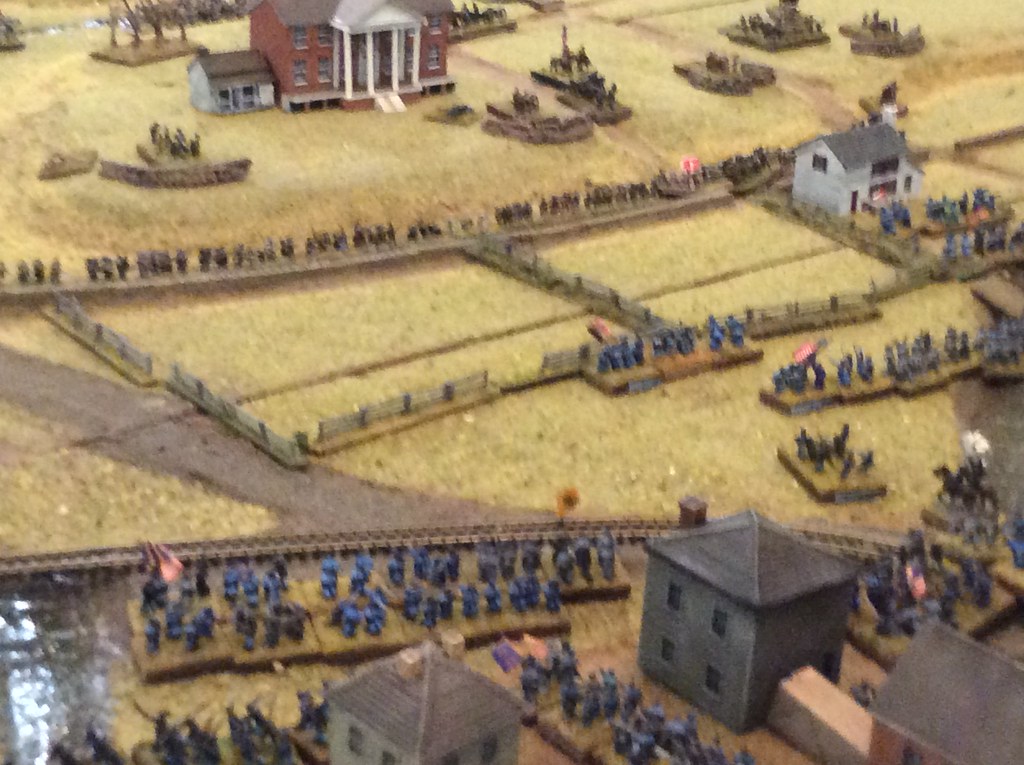 I have NO IDEA what attendance records were.  Dan Murawski seemed to think we were going to go over 2000, which would have been pretty amazing for any Fall IN! show. I’m not sure it happened, though.   I hope it does– Fall IN! continues to grow as our Yankee brethren forfend to attend a convention in Fredericksburg (if you take TMP dross seriously)– so Historicon’s loss is Fall IN’s gain, although as usual it’s hard to quantify ANY statement about who actually comes to shows and why they stay away from others. 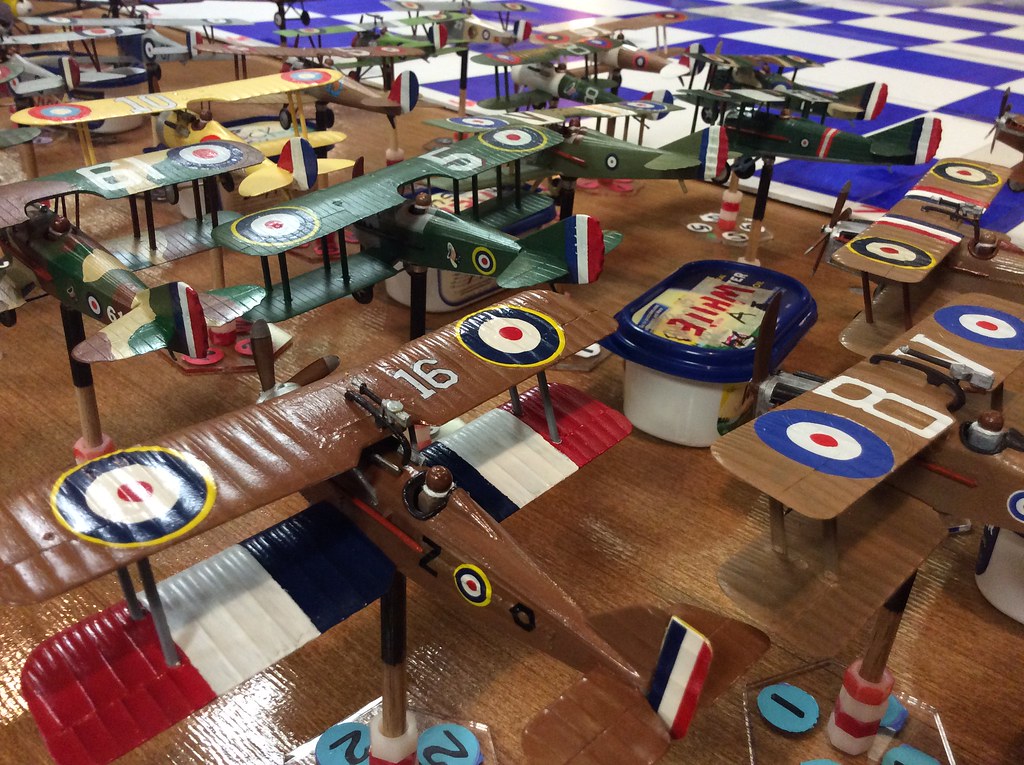 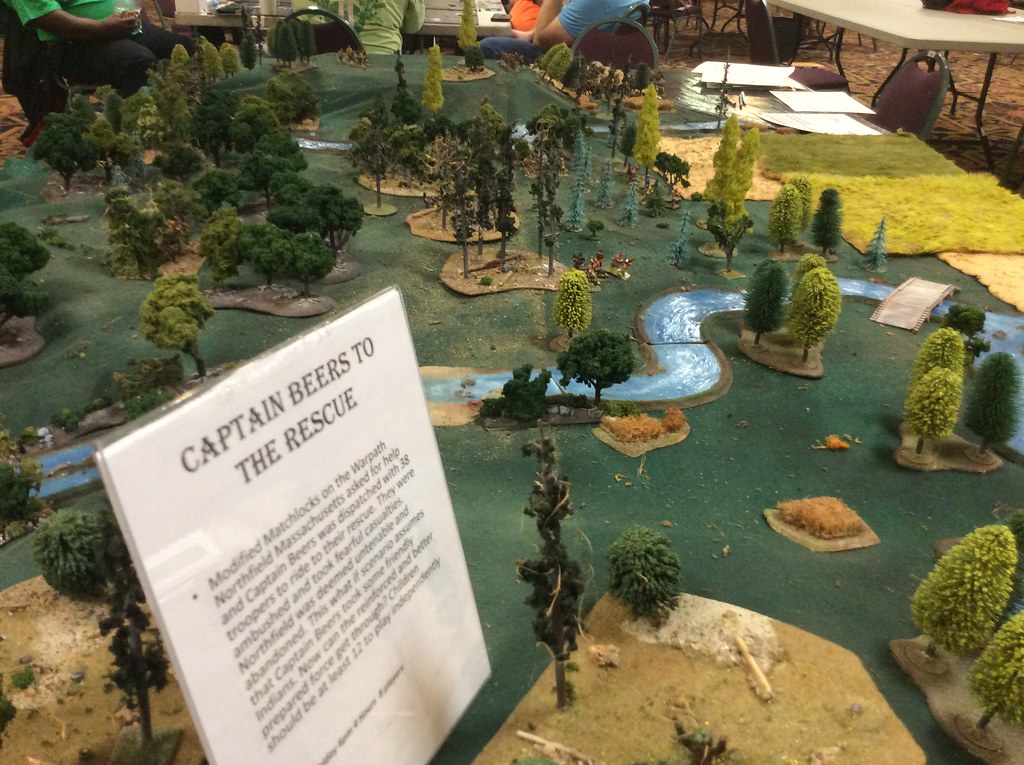 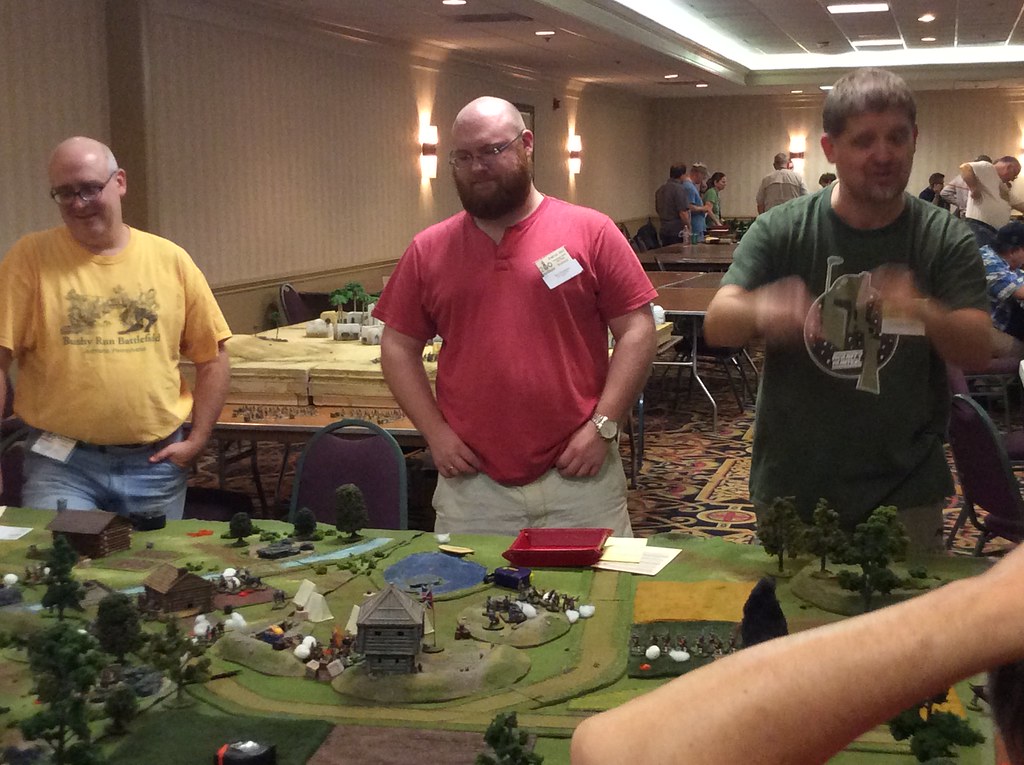 The New York State/Erie folk who arrange Toys for Tots donations and raffles for FALL IN! were once more back on the job, doing a good job.   Seemed a little quiet this year, however, I missed Santa Moe. 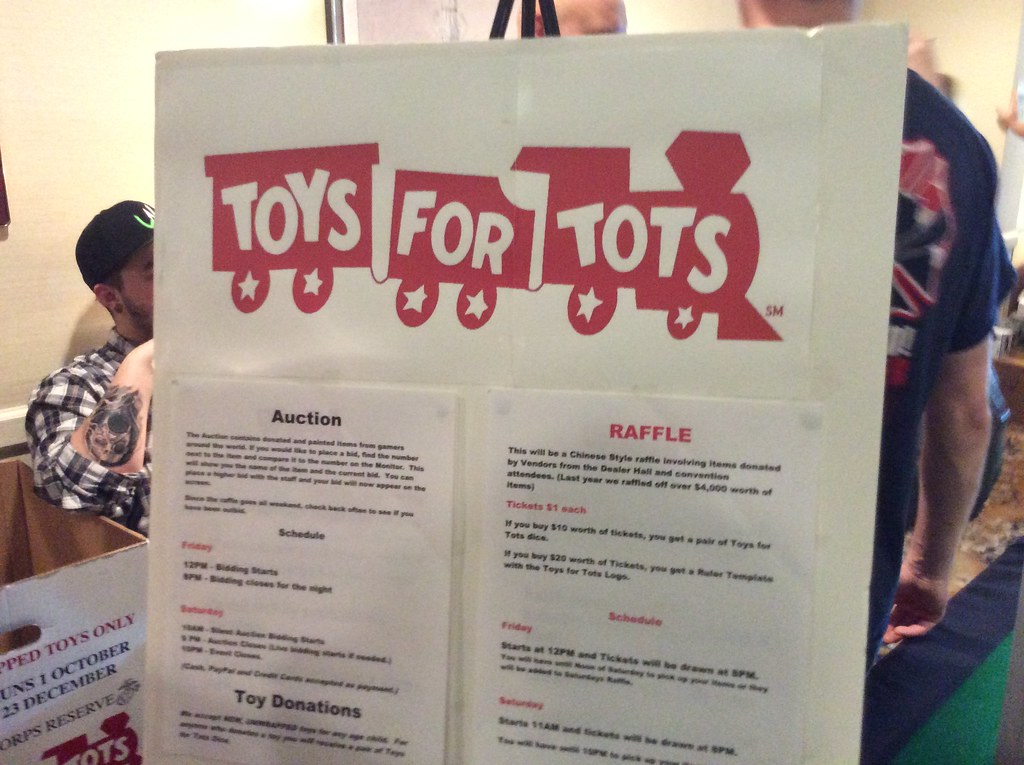 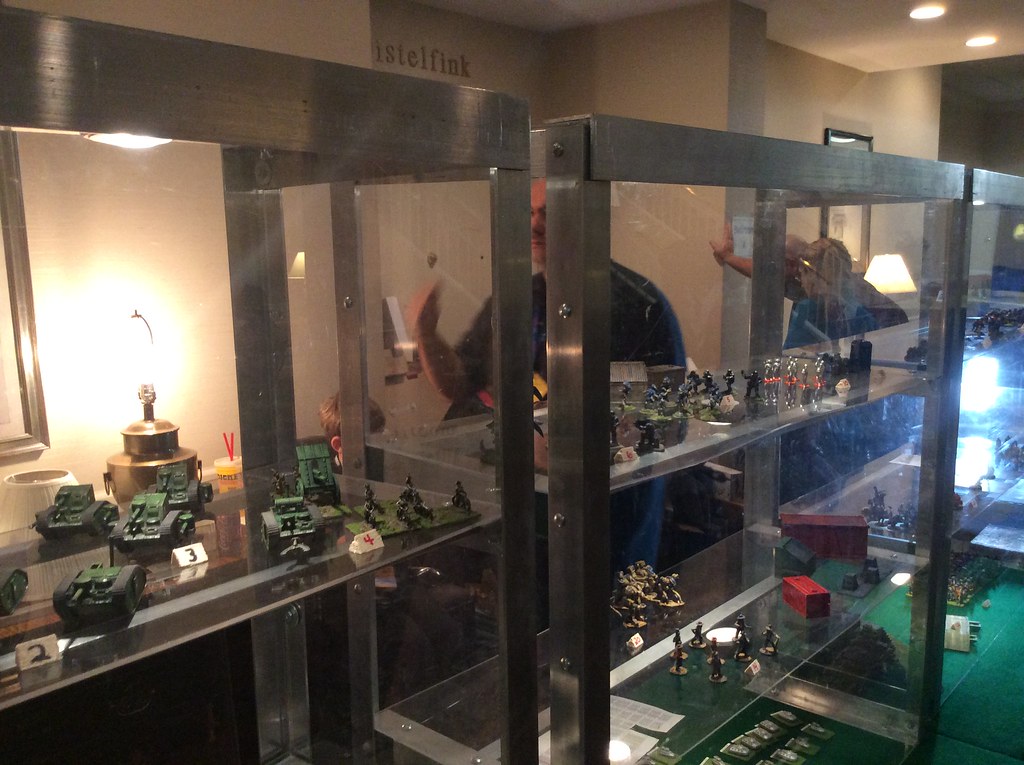 I admire what Uncle Moe and his sizable crew do for Toys for Tots.. giving the lie to the perception that all gamers are immature selfish bastards with bad BO and poor social skills.  I mean, we do occasionally do something nice for charity, despite the BO and bad social skills, right?  That has to count for something!

I found myself not much interested (again) in staying up late and drinking in the bar, since it was somewhat devoid of a crowd.  So I went to bed and got up in time to weasel my way into Brian DeWitt’s epic portrayal of the Persian victory at Artemisium.  What’s that?  You always heard it as being a GREEK victory?  Well, so it might have been, were it not for our right flank and some profoundly bad luck.  Brian’s a great designer and a good “systems man” in his approach.  I liked this rule set, which he claims is not ready for prime time, but it seemed pretty well defined to me.

Having lost Western Civilization in the morning, I cast about to see the rest of the world, doing a run on the flea market and not accomplishing much. I did get a copy of Samurai Battles (brand new) for 20 bucks from the designer. Not bad at all. I also got a few assorted bits here and there, nothing special. I also went to the vendor hall and picked up a cigar box game mat, for my 3D rocket man game (more on that in the near future).

My firm intention was to play in yet another ironclad game in the afternoon but I was feeling pretty dog tired, even though I had eaten reasonably well and not stayed up massively late as I am used to at these conventions. I’m not sure what it was but it did make me feel a little pekid. My intention was to sleep for a half an hour.. HA!!

After a decent meal (at the host, where I ate most of them), I knocked about a bit and waited for Eric’s ROAD WARRIOR INVITATIONAL to get started.  He was going big this year, or going home..

Now, I thought the vehicles showed amazing creativity and ingenuity… but wow, I don’t like that crowded track.  There’s no room to get around each other, and soon something like this happens:

Oddly enough, many drunken hoarse renditions of the phrase WITNESSSSSSSSSSSSSSSMEEEEEEEEEE! was not enough to get the truck over the finish line without being stopped by the forces of Bad.  Humbling, ain’t it?

And so to bed.

But the child who is born on the Sabbath day,
Is lucky and happy and good and gay.  (in the old sense of the word).

Sunday was the usual last pass on the Flea Market (found a few neat 15mm Khurasan figures) and the dealer room (not much of anything except some Stan Johansen Road Warrior stuff).   After the usual goodbyes, I was nosing my van into traffic for the long ride home, where, I am happy to say, someone was glad to see me.