BLAST FROM THE PAST: Due to a recent mention in the Miniature Wargaming blog, this old project of mine received more interest than when I created it in the first place!  The release terms are still the same: creative commons, non-derivative, non commercial.  Have fun, let me know how I can fix this. I’ve incorporated some feedback in red text (from 2010, not 2006) to show some of the questions this game received when I posted it in 2006.  Unfortunately rewriting the entire postcard may have to wait, but I hope the new stuff in red will clarify things somewhat

This is a game of galley warfare that is a quick freebie giveaway. Poseidon’s Postcard is very simple game of a small naval battle set in the age of Greek and Roman naval warfare. Players can construct a force consisting of TRIREMES or QUADRIREMES, depending on how you build you force structure. Players can customize their fleet with 30 build points. Larger (quadrireme) ships cost more than smaller (trireme) ships. Players may customize each ship by adding corvus, more sailors to stave off fatigue, more marines to help the ship fight well in boarding actions, and a Ballistae to add to the ranged combat. You may also pay for an Admiral (although it’s expensive) to seize the initiative and assist with ramming.

Poseidon’s Postcard is constructable board game of galley combat where all the pertinent bits to play the game are printed on a large sized postcard.

It will be available for download in PDF format eventually. Right now I exported it from Publisher and the only format I found acceptable to Blogger.com was JPG. There’s nothing all that complicated about this project; just an idea I got from a fellow named Mike DeSanto on BOARDGAMEGEEK who created something similar called “Postcard from the Revolution” with the battle of Brandywine on one side and the rules on the other. Putting everything you need to play a game on one (slightly large) postcard– that’s a challenge!

Change: Swap out the term “Skorpion” with “Ballistae”. I had the terminology incorrect.

There was some questions I didn’t publish that I might as well clarify 4 years later. Here’s how to TURN YOUR GALLEY:
The stern end of the galley swings one hex port or starbord, as indicated in the diagram. 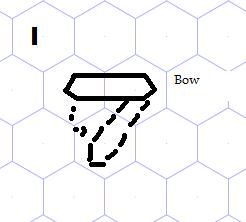 If this is blocked by the map edge or another boat, the ship does not turn in that direction.  Movement cost for turning is 1 per hex turned into.

The final game will be released as an Open license game that you may freely share with anyone (when it’s ready).

I believe these JPGS will print out well on card stock at 1:1 scale. I’m working on better resolution; I realize these are a bit grainy, but they are not final.

NOTE THIS ITEM IS IN TESTING. IT IS A DRAFT. DO NOT DISTRIBUTE.