Last week was FALL-IN! the Fall show of the Historical Miniatures Gaming Society. My son Gar and I both attended.  I apologize for the late posting, but well, you know, there was that National electing the Moron in Chief thing we did directly after…

For those of you NOT in the know, two weeks before Fall-IN!, this happened: 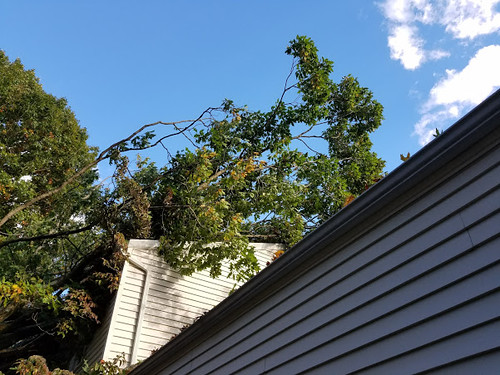 So this fallen oak has had more than just a huge impact on my house, it’s had one on my plans as well.  I cancelled plans to attend Fall IN! and took a week off to concentrate on the backbreaking labor of clearing out my house for the reconstruction crew.   After a week of hard work, I still had no intention of attending, but Audrey didn’t have a problem with a weekend trip, reasoning (correctly) that there wasn’t much the teams could accomplish on a weekend.  It was nice to take a small break from this task and both Gar and I jumped a the chance. 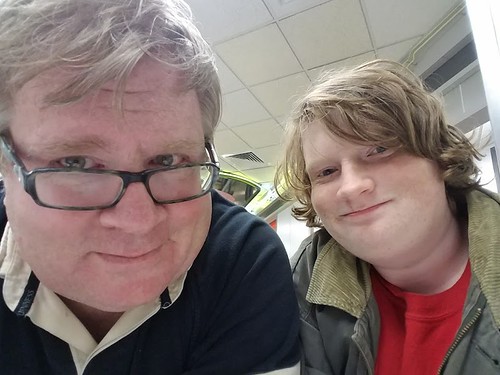 The earliest I could go was after work on Friday, so that meant an arrival by 9 PM or so.   So most of what we did was pretty brainless– hanging out in the bar and catching up with Otto, Cleo, Bob, Todd and many others wandering in and out. 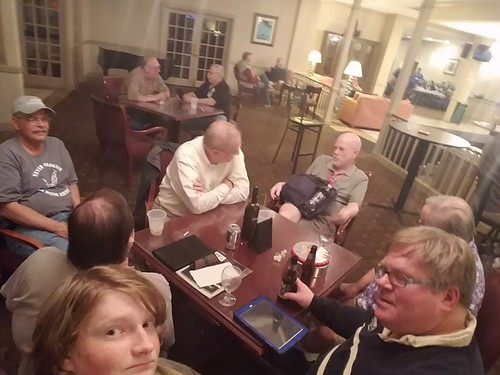 Where ALL HMGS business is conducted ultimately..

So! after crawling into a bed with a mattress that (no kidding!) felt like concrete with a sheet on top, I nodded off.

We breezed through actual registration and buying a flea market table.  I bumped into Bill Alderman, and old, old friend.  He is the alpha male behind “Big Board Games” which is converting classics into new versions– and is selling a new version of CIRCVS MAXIMVS from Avalon Hill/Battleline.  It’s very spiff. 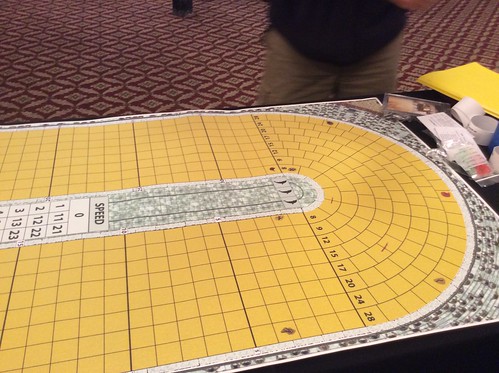 Saturday day was spent visiting the dealer’s area (I didn’t buy much; see the tree event above for an idea about why) — I was delighted to see the “Badlands” Battlefield in a Box terrain show up again at the Gale Force 9 booth.  This is my favorite series from that vendor– impressive dark desert buttes and plateaus that can be turned into islands for Big Danged Boats, buttes for White Line Fever, and Frostgrave terrain.  I also picked up some sailpower boats and some used 15mm galleys in the flea market.

Later, we did a first for us– instead of gaming, we tried selling stuff in the Flea Market.  It was a learning experience.  I took the 2-5 slot, and had mixed results.  Small stuff sells.  Miniatures sell.  Boardgames? They don’t sell.  I ended up taking two boxes  home and 3 boxes there, so that’s a plus.  I’ll do it again.  One thing about the flea market experience, you get to see some sweet chapeaus.

So, yeah, what can I say about the Flea Market experience?  It kind of dragged on and was a slow way to make a buck on my old stuff.  I guess it beats Ebay.  We’ll have to work on presentation next year.  Perhaps, silly hats?  All I know is I was glad to pack up at 4:40.  That last hour dragged. 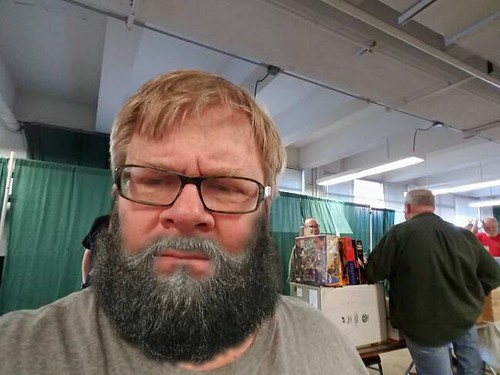 |
I dozed off, and woke up to find all these tiny dudes bowling under a tree where I woke up…

We got a chance to look at a lot of games, but not play in many.  There were some fun games being run, admittedly most of my first choices had already played when I had the actual free time to play one.  Sigh.  Such are the demands of commerce. 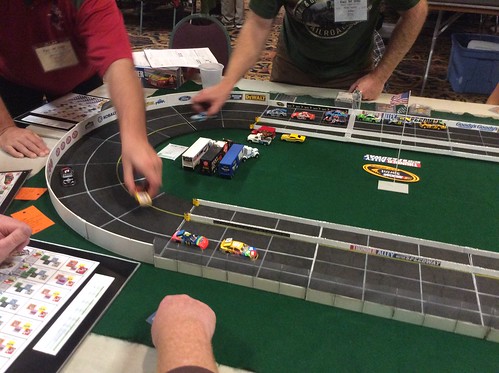 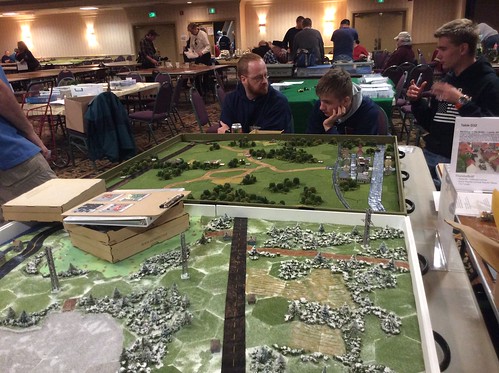 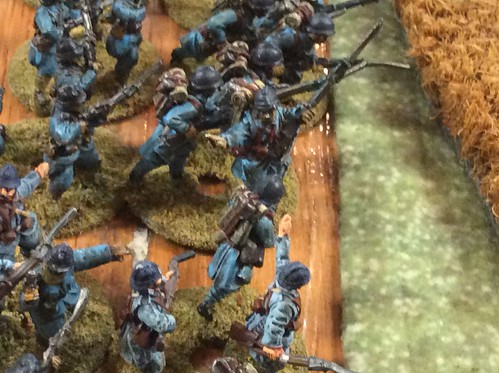 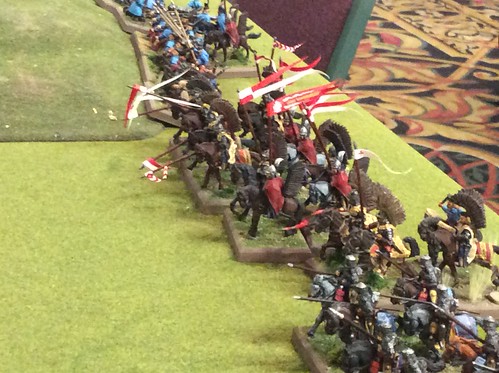 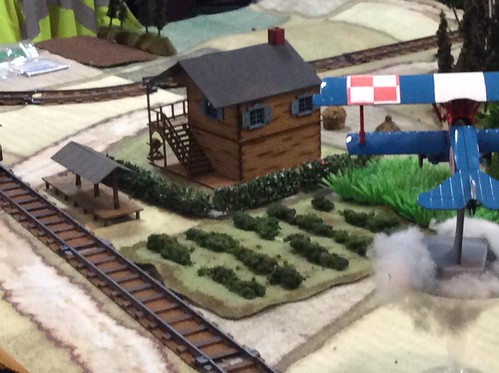 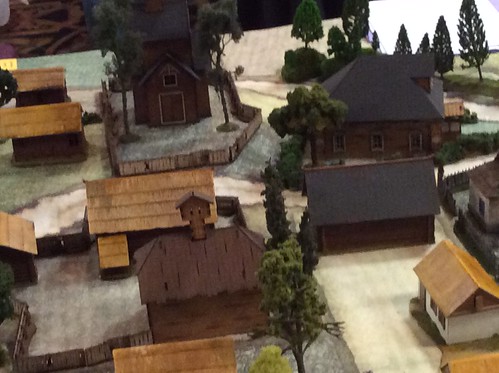 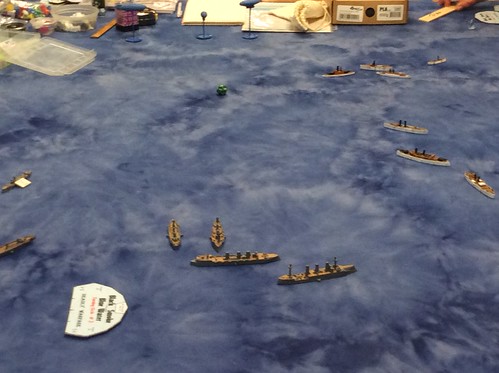 Saturday evening I had a game to get to, so we went and consumed large amounts of charred dead animal flesh in the hotel restaurant.  Well, I did… Garrett ordered tortellini, gobbled it up, then stared at me accusingly while I wasn’t even a third of the way done with my steak.  I sighed, divided it in half and flipped him half, making sure to keep my hands away from his mouth.. the gnashing and chewing noises were truly hideous. 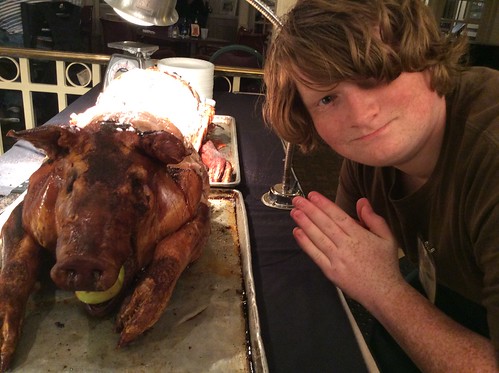 Well, if you know me, or have read this blog before even a little, you know I really enjoy naval warfare miniature games, particularly in odd periods that are pre-World War II.  So I signed up for SAIL POWER, a 15mm sailing game that I had observed earlier.. great setup by these guys!  Large 15mm forts, islands, and tons of reasonably period authentic ships. Since 15mm is my scale for most naval games (see Big Danged Boats), I was all in for this, and I wasn’t disappointed. 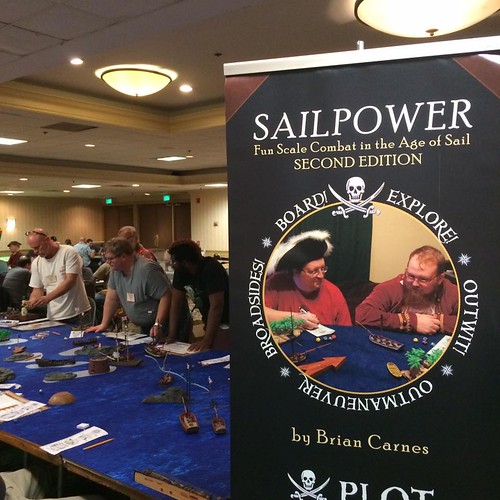 There, above, is your intrepid sea dog of a narrator, next to “Sen”, one of a team of dedicated GMs running this event ALL WEEKEND LONG.  They deserve the iron man trophy!  Great setup.. what a fantastic game!  (click the picture to go to the FLICKR Slideshow, btw).

I had such a good time at this game, it really made my weekend.  Thanks to the folks at Sea Dog Game Studios for putting on so many events.  The highlight for me was being played like a cheap flute by one Scott Landis.   He lured me in with some sh*t talk, I responded in kind, charged at him like a bull in a china shop, and suddenly my crew was playing “Shakin’ Hands with Jesus” as we dodged mortar fire from the hidden position on the island!  WOW! that thing was seriously overpowered.  The game emphasizes (roughly) real world sailing models, slightly reversed.  The models are exquisite.  IF you have enough space (and this game definitely requires such), the eye candy factor is beautiful.  You can find the Sail Power guys easily enough, they are on Facebook and other places.

I’m not sure if you have to be on Facebook to see this, but here is a webcast I made playing the game live…

We did the normal late Saturday night stuff, drinking beers and playing games.  Dan Murawski introduced me to KEEP TALKING AND NOBODY EXPLODES, a cool computer/paper hybrid game about defusing bombs where one guy describes what he is seeing on the computer and the other guy(s) work the problem with the (paper) bomb defusing handbook.  Great idea for a game, surprisingly tense and fun to play.  Here’s a little screencast of that game experience I posted to Facebook, if you have an account.

I bought a copy on Steam, myself!

talking about convention locations and the Host etc.

Sunday, we got packed out and did one last run at the Exhibitor Hall, where I dropped by the Sail Power booth and bought three ships and tons of resin cast guns. Great vendor! They sell secondary casts that aren’t “perfect” at a steep discount. I hope they show up at Cold Wars, I’ll throw more business their way. 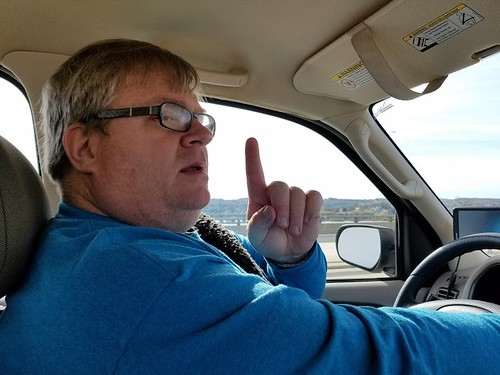 “Over the Mighty Susquehannnnnnnnnna!” (we say that every time crossing it..)
And with that, we nosed our car into traffic, and headed home. It was a good Fall-IN! Many thanks to the staff, Dan Murawski, Brenda Zartman, and everyone else who hewed wood and carried water for the show. We had a great time.= 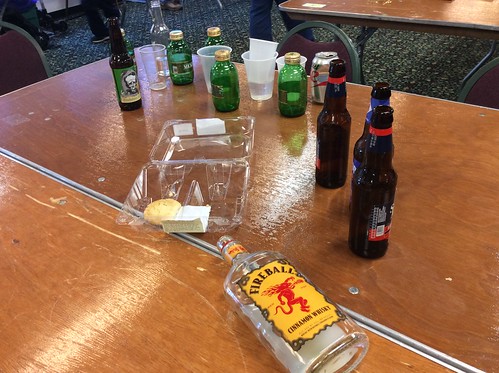