It’s time for one of my favorite things to write, a convention narrative.  From Wednesday 15 July to Sunday 19 July, I attended HISTORICON 2015, at the Fredericksburg Convention Center.  I was on staff for the convention (working the events board), I stayed at the Homewood Suites, and I ran one game Saturday night.

Traffic?  Well, there wasn’t, much.

I had half a day on Wednesday but had the car packed the night before, so I hit the road directly after changing and arrived in Fredericksburg from the DC area in about an hour.  Traffic was dense but steady– if I had been any later, I would have taken the Western route– out 66 to 29 South through Warrenton, then 17 directly to the Center.  As it turned out, I was willing to gamble since I left at 1300, and it paid off in time.

The usual first day hubbub was in evidence, people hanging up tags and stuffing flyers into program books and setting up the registration system.  Controlled Chaos really.  After a while it becomes second nature.  The CD did try to set up convention registration in the long hall next to the side ballrooms.  Jury’s out on that idea.  I think it might have worked best by the hallway near the windows on the far side of the hall, as the hall is wider there, but I understand you will want reg to be in the central part of your convention so you can control events better.   I thought the hall was  a little bit of a squeeze as a result.  Gamers ain’t svelte, as a rule.

The Typical Challenges and a new biting phenomenon

There was the typical challenges associated with the facility.   It does get loud on Saturday and Friday and Thursday peak hours.   The carpeting helps a lot.  So does the vertical drapes that break up the space around the main room.  We arrived expecting that. The HVAC handled Wednesday and Thursday’s environmental conditions fine; however by Friday midday the heat index was well over 100 degrees F– hot enough to make you instantly feel like an un-wrung sponge and gasping for breath once you walked outside. Not healthy environmental conditions!. Inside the hall the HVAC did its best but it was, well, “muggy” in the Exhibitor’s Hall to be certain.  One new nuisance appeared to be a biting fly that was annoying the hell out of people during games.  I’m not sure what form of insect life it was but I had small welts on my legs.  Very annoying, I think it was a sand-flea. On the plus side, that was my favorite hotel experience I’ve had at Fredericksburg. I was parked close enough to walk to the hall every day. The complimentary food didn’t suck and it was in abundance. I wish the other hotels would follow their example.

Thursday was a brisk start..  I was at the events desk for the entire show, so spent much of the time handing out tickets and resolving table problems.

Here we are improvising tickets. 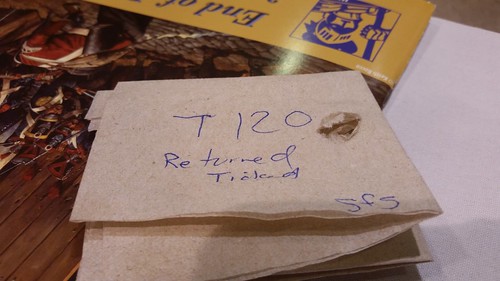 Historicon 2015 had many great games but most of the ones I saw were sell-outs. Why? Because there clearly were not enough of them being run. There are plenty of attendees that wanted to get into 2 or more games a day, but it wasn’t going to happen. Pickings were slim. So if you want more historical games (or any games for that matter) people are going to have to step up (either in Fredericksburg or Lancaster, by the way). I can afford to lecture since I did run one, he said smugly.

I gulped down a free manager’s special (dinner) and hurried over to the main hall to play in a chariot race.  This was a fun game (totally full up), done in 54mm scale and using Brian Dewitt’s chariot racing rules. I’ve played in games using those rules before and I enjoy them– much easier than Circus Maximus.

I like Chariot games– and I’ve been in a few over the years. Experience teaches me to to let the blowhards who like to crash into each other get out in front while they attack each other, and carefully inhabit a slot in the middle of the pack waiting for the aggressive ones to die. That didn’t happen quickly enough so by the end of the second lap I was taking risks to pull out in front or I would fall too far behind. That worked,kind of, but I had been pretty battered by attacks and when I tried to go into that final curve, my chariot flipped on me. Withing half a lap of the finish line. That’s the way the cookie crumbles!

Here’s a little thing I put together using some stills and a little footage left from a Periscope session. I used “Jockey full of bourbon” by Tom Waits as the music (the first time) but Vimeo had copyright problems so there’s some godawful royalty free electronica on there now.

I hung out with some friends later and played some board games, notably Letters from Whitechapel (the new version from FFG). Whitechapel is a fun little guessing game with attractive components. The players are constables trying to catch Jack the Ripper in Victorian London. Jack uses hidden movement, from sector to sector, as the constables call out the sector numbers to see if he’s there. We came close a couple of times but Jack solidly kicked all of our asses. 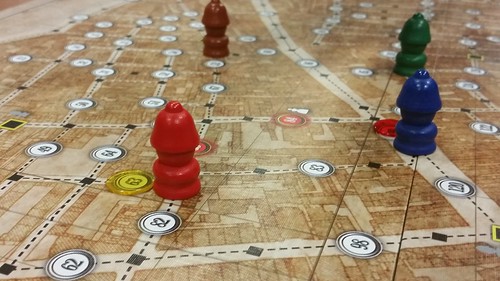 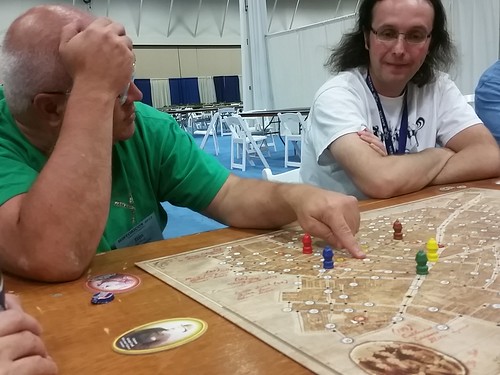 Games were pretty good at HISTORICON 2015, but nothing that I considered a huge standout. There was some very pretty terrain setups here or there, but I saw a lot of GMs cutting corners, too.

There were also GMs who spent a year or more making a setup, as you can see here: 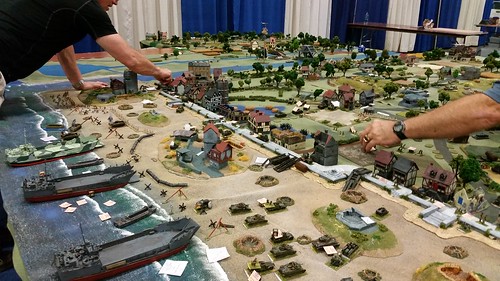 I enjoyed the games I got into, for the most part. If there was any standout theme, I’d say “Air combat games”.. seemed like there were a ton of them being played. Mostly Check your Six.

Here’s a slideshow of other sights seen around Historicon 2015:

The next day I worked the Events desk as normal, and then got into a game of BLOCKADE RUNNERS run by Gary Coyle. Gary is an excellent gamesmaster and I have played in his Roman Seas games before and had a great time with them. Blockade Runners was a Charleston Harbor scenario during the last full year of the Civil War. As the Union, you’re trying to stop blockade runners from entering the harbor. As a Confederate, you’re there to engage the Union fleet and prevent their conditions from happening. I had two Passaic ironclads, the other two Union players had Passaic ironclads and the New Ironsides. We were up against a number of Pametto State style casement ironclads armed with a mix of guns and spar torpedoes. There was an inshore squadron of David style and Spar torpedo armed small boats that really didn’t see action. We pulled off a very narrow Union victory by sinking two Blockade Runners. We were unable to do much lasting damage to the casemates, though Palmetto state was pretty battered by the end of the game. On the plus side not much damage was done to the Union side either. Much as I like Gary’s games I wasn’t enchanted with the rules, Steam and Sail Navies. Combat resolution was slow, very chart heavy and I never really “grokked it”. Perhaps a good system for a game in someone’s basement but not for a big convention game. 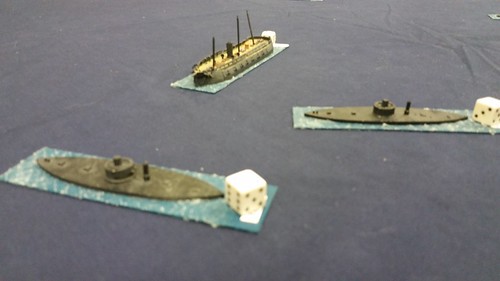 (Naturally, click on the picture above for a small slide show on Blockade Runners)

Afterward I went out for dinner, to a local place I hadn’t tried yet, Tito’s Diner. One must try new things. It wasn’t a raging success. Any diner should be able to master a basic Reuben, and mine had plastic in it. 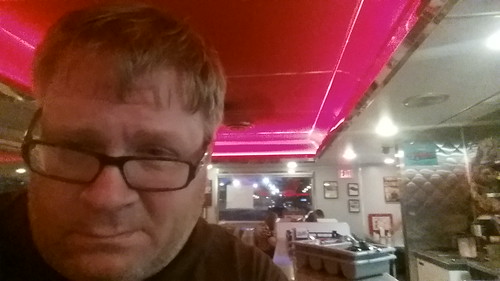 Saturday was another brisk day, as people queued up to get tickets. Except for MY game, which was being held at 10PM.. was I insane? Should I have scheduled it at 9PM?

I did some shopping both in the dealer hall and the flea market. I also popped out for a few supplies for the evening’s festivities.

I’ve been working on a Road Warrior style game off and on since Cold Wars. It came together rather easily, using Eric’s Road Warrior rules as a base and doing a lot of tinkering. This game was a dry run for the Game Camp I’ll be running in August, and I have to say it was a great success. People had a great time, the rules were simple enough and though some of the stats need tweaking, the basic ideas are easy enough to grasp and run with. I loved the way the game built its own narrative.. the hippies with the cloud of pot smoke behind their VW Van, the Fighting Griswolds, Herbie the Hate Bug, the not-so homicidal Postman and his SLOW postal truck, the Bikers, the explosions.. simple fun! That’s a win.

To see a slideshow, click on the picture below

I ended up getting to bed at 3AM, despite my best efforts to get some sleep at this convention.

Sunday was spent in some desultory shopping before hitting the road North. Traffic back home was worse than traffic there. It’s all in the timing.

So, in conclusion– a good convention! 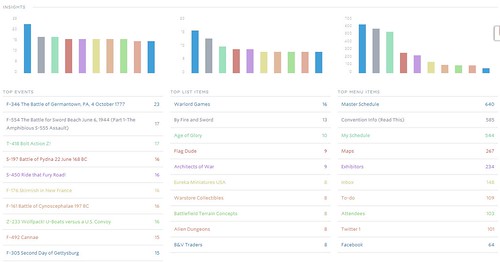 There was also a big hook to Twitter and Facebook at this convention and the hashtag #Historicon2015 was used liberally. It really helped spread the word, I think.

So that was my Historicon, I’d give it a decent B+. Thanks to all the staff and leadership for working tirelessly as unpaid volunteers to put on a great show, and thanks for reading.