I don’t want to overwhelm the ScrumCon 2019 after action report (last post) with a post on a game I ran, or it would load the post with pictures of one event.

I took one of the game slots in the morning shift of ScrumCon, which meant a 10:00 AM start time. We had no trouble setting up– terrain is basically a flat cloth, some scatter terrain, a few bluffs, the pyramids indicating where you need to turn, and the Gates at the near and far end. I had about 20 vehicles, with a wide range of sizes and classes.

I ran Mad Maximilian 1934 at Fall IN! 2018 with Jon Lunberg.  I was noticing kind of a runaway effect with that game, where there wasn’t a tremendous amount of interplay between vehicles during the race.  So I listened to one of the player’s suggestions and created a course that crosses in the middle, hence, “The Southern Cross”.

Note that all of the cars that started the race didn’t end the race.  Unlike the Fall IN game the ScrumCon version was brutal, violent, and just as funny. 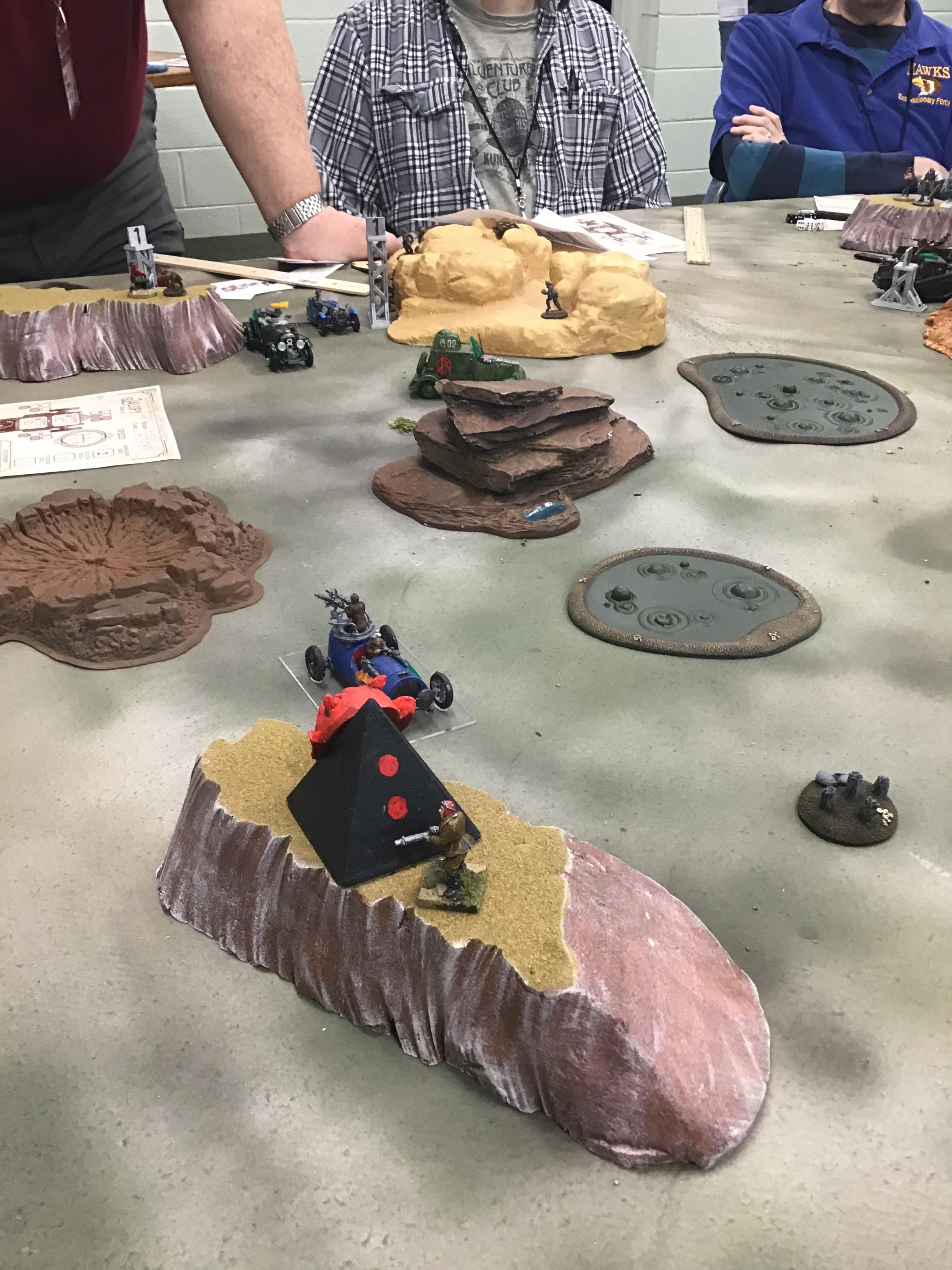 I lifted a few captions from some pictures of the ScrumCon wrap up. The Game ended when it was called for time. If there was a “winner”, it wasn’t obvious. There were burning, crashed vehicles from one end of the track to the other. As mentioned above, Brett Abbott was about as close to winning things as a person could get, and he made the glorious mistake of raising his speed up to FIVE at game’s end, then having to turn in Amber. That’s checking the turn at 2 times his current speed, versus his driving skill 2 and handling (I think) at 1. 10 dice versus 3 dice = the Singular turning into a burning smudge on the road. This is not a game for sissies.

Overall, this was a great game. I innovated a little bit, not to any extent that I would break the rules. Instead of using an initiative based upon current speed, then size, which I thought slowed the game down last time, I went with a standard skirmish-style card draw initiative where we assigned numbers at start, and I would randomize the turn cards and call a number until the initiative deck was exhausted, and another turn would start. To give this process a little spice, I kept a small dirty tricks deck next to initiative, and would randomly insert one card without looking before I started flipping cards. If I drew a Dirty Tricks card, the card applies to the NEXT INITIATIVE CARD DRAWN. I deliberately didn’t make anything about the DT deck all that lethal. I don’t want to add a “flip a card and you blow up” event, just little events that either mess with a racer or mess with an opponent. During the course of the game we went through 24 turns, and of all of those only two dirty tricks had any lasting effect, which is fine.

The other innovation I used was speed markers, which I’m very happy with. I picked these up from Litko. They number 1-6 in green, then yellow, then red.

A Harpoon Gun fires a big steel harpoon with a cable attached to it from one vehicle to a target vehicle.  It would help ft would help if the target was a smaller vehicle!  First, roll to hit.  2D6 Fortune (for the weapon), plus Gunner Skill Minus the Difference in speed between attacker and target (as a positive or a negative number, zero if they are moving at the same speed).  If you roll a success, then the target is harpooned.

Example: A Junker moving at speed 3 fires at a Buggy at speed 2.  He fires 2 for the gun, 1 for gunnery skill, and minus -1 speed difference (which equates to plus 1), so final number is 4.  Versus Driver Skill 2 on the target Buggy.  The Junker rolls one five, which is a success.  He is now attached to the buggy.

What happens when you are harpooned?  The next initiative turn will tell you.  Whomever moves first must make a maneuvering test, with the attacker (harpoon gun car) making an Amber style check (2 x current speed) versus Driver’s Skill and Handling.  The Harpooned car makes an attempt at a crash check (red) versus drivers skill and handling.  IF the harpooning car fails, the cable breaks.  If the harpooned car fails, it gets pulled sideways after the harpooning vehicle.  Both vehicles reduce their speed by 1, and the towed vehicle takes 1 point of damage on all sides.  A harpooning car can cut a cable any time.

Grenades (or Molotov Cocktails) are short ranged, they can only be thrown in the range of 6 inches.  Choose an aim point, roll 2 fortune dice (two different colors) plus gunnery skill versus the targets driving skill.  If you score no success, the grenade drifts.  Look at the angle between the two fortune dice.  That is the angle the grenade bounces.  Look at the gunnery skill dice, that is the amount of inches it “drifts”.  If the aim point drifts within THREE INCHES of the vehicle, it takes two points of damage on that side.  If there isn’t any armor any more, roll for a critical hit (once) to show the effect of shrapnel.

Mines are either placed versus Ambuscade Dirty Tricks card or by a car equipped with a Mine Dropper equipment.  Place a token within 6″ of a vehicle (if a DT card).  Unlike Grenades, the Mine Token stays there for the rest of the game.  If a car drives within 3″ of a Mine Token, it must check Driver’s Skill plus Handling (Fortune) versus 2 Fate Dice.  If the Fate dice has a success, the mine goes off.  The car takes three hits either on front or rear.  If the driver wins the roll, he drives past the mines and they don’t go off.