Beyond the Black River!

Fhrank the Cimmerian hawked and spat, shifting the great weight of his battle axe so he didn’t pitch forward on his face, as he was wont to do when he carried it extended in front of him in rough terrain.  “Hssst” exclaimed Costrano, his limewashed man-bun bobbing just a few feet in front of Fhrank’s line of vision.  “Quiet! These woods are crawling with Picts!”  Fhrank spat again, contemporaneously.  “Bah.  Let them come.  I have yet to see one of these tree-hiding curs put up a decent fight in all the time I’ve put in soldiering.” Costrano’s hawk like visage showed concern as he waved his hand frantically.  “Ssst!  The idea is to inflict surprise, you Cimmerian oaf!  You’re making more noise than a band of Turanian mercenaries on payday!”   Both of them were cut short by the harsh rasp of Subotai, the local squad leader.  “If you gentlemen would be SO kind as to hasten your pace, we are expected in yon stockade at roughly the same time as Captain Conan, not an hour later.  Mind any patroling Picts.” Fhrank winced. “CAPTAIN, now, eh?” he rubbed his chin.  “Someone’s putting on airs.  If there were any Picts patrolling these woods I suspect they would have made their presence known, by now.  We’re safe as houses!”

At that exact moment… 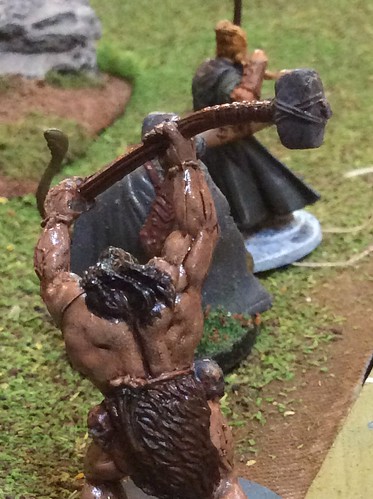 The now suddenly abashed Fhrank let out a classic Cimmerian “By Crom!” and jumped around the engage the Pictish brute, who was busily trying to carve Subotai into chutney. Costrano had a cooler head, and put two arrows neatly into the Pict’s eye, and he dropped, suddenly deader than fried chicken.

At that moment, the inevitable happened..

Costrano the Archer winced and shook his head, slowly looking up at the evening sky, as if to beseech a higher power. Then he bent to the task of helping Subotai, who genuinely was in a bad way after the Pict attack.

(and many other fun things happened, too!)

Last Saturday was the monthly meeting of the Second Saturday Scrum club at my friend Joe Procopio’s house.  We generally play skirmish level games that can be played to conclusion in one evening.  I have run Frostgrave for the Scrummers on occasion.  Joe was fine-tuning a game for his HISTORICON event, which will be a two part “Beyond the Black River” scenario set in the Conan story of the same name by Robert E. Howard. The story is set close to the prime of Conan’s life when he’s serving in the Aquilonian army as a Captain of mercenaries. A punative raid over the Black River into the land of the Pictish wilderness (see map) went all pear-shaped.. and now all of the Pictish tribes have risen up and counter-attacked into Aquilonia. The first scenario is a rescue of sorts, trying to recapture some hostages being held at the Pictish stockade in the center of the steamy Scottish (?) jungle *.

We played that one out, with two characters each, an archer and a melee specialist. I picked up a big barbarian looking guy (Fhrank the Cimmerian) and Costrano, the Archer. Since I provided a lot of the archer figures my archer had been a Viking, sporting one of those Viking Man-buns. No matter, I determined that man-buns were the height of Fashion in Brythunia, where I imagined he was from.

Joe used the jaw-breakingly named “Sellswords and Spell-Slingers” rules from Ganesha games. In general, I liked the mechanics, which were easy enough– roll to beat a “danger number” in most cases. HPs for both creatures and characters were quite low and that made some critters horrendously overpowered. I liked that most of the rules that we would be using fit on one card.

Joe, being the graphically inclined, creative guy that he is, put in a nice effort in creating story arc driven cards that would evoke the theme and events of the original Robert E. Howard story Beyond the Black River. You can listen to the original here on Librivox, I think it’s one of REH’s better stories.

Initiative is handled by number cards. Then the initiative player can roll 1, 2, or 3 20 siders to hit an activation number. If he rolls 10 or more, great, he gets an action for each success. If he fails one, something happens– an event is pulled from the event deck. This could be something as prosaic as Fhrank the Cimmerian tripping over his own two feet (which did happen as depicted above, turn one, right in the middle of another event, an Ambush card) or it could be summoning up a giant evil forest critter, or an Ambush, or more pictish infantry reinforcements. All in all, it’s a pretty elegant, simple system, and though I am no fan of Ganesha’s Song and Blades and Heroes, I did find myself liking this system. The rules evoked the setting perfectly.

We played all of the first scenario, which ended up with us chasing off Zogar Sag the Pictish wizard who was controlling the giant beasts, rescuing ONE of the hostages, and fleeing as Pictish reinforcement cards kept piling on and on and on. We gave Joe some feedback about that.. if you don’t have enough Pict figures, maybe you need to put a limit on those kind of cards, eh?

So, kind of sort of a victory for Scenario 1. Though, scandalously, Conan (run by my son Garrett) died in that one, so technically he’s not around for Scenario 2. He’s a player character of course, so it was only a flesh wound. Edit: it wasn’t Conan that died, it was his archer companion, who had to be left behind.

Scenario 2 was different and boy did we learn our lessons from Scenario 1. This time we were in the fort on Thunder River (again, read or listen to the story, it’s in public domain and can be found in many places). Our job was to rescue villagers being overwhelmed by Picts coming from the Western edge of the board. THIS time, we kept the archers pretty close to each other, and every band of Picts that ventured out was met with a withering storm of arrows. Or at least a refreshing shower of them. Archers are the real killers in this scenario and the melee guys can be useful but are better when they are supported. I had the only archer that could actually heal people (Costrano), so he was doubly useful.

We didn’t have time to conclude Scenario 2, but I think we did better overall than we did for Scenario 1– we kept together more and supported movement and avoided ambushes.

SO that was my evening struggling with those dangerous Picts in ancient Scotland. Joe got some good feedback to tweak his Historicon scenario, and we had a great time indulging in old-school fantasy barbarian mayhem. I liked the rule set, which isn’t a brain bender by any means. It plays clean and quick and was useful for evoking the setting for a Conan-themed game. I look forward to using it again, and to Historicon.

* A note about all the Scottish jokes.  “Picts”, as any student of ancient and medieval history knows, were one of the native peoples of the island that would become Britain, particularly in the Scottish area.  For some odd reason Picts show up in a lot of REH’s work– I think he must have had a fondness for them.