The Dice of Generations

When it comes to geek “cred,” you either have it or you don’t have it. When I was a kid, there was no such thing as “geek cred”. That’s because the very concept of receiving peer social approval by being able to intelligently speculate on the origins of Boba Fett or recite Monty Python sketches verbatim was only rewarded by a very select crowd, and this was lore spoke of in hushed tones, hurriedly while we were looking over our shoulders to make sure nobody was listening. Lest the jeering start.

Kids these days don’t know how good they have it.

So.. when I reference these objects, I’m sure there will be people in the readership of this blog that are going to recognize them. They will know their origins. They will sigh wistfully at the rounded edges, the scratches, the almost vanished grooves where numbers used to be. 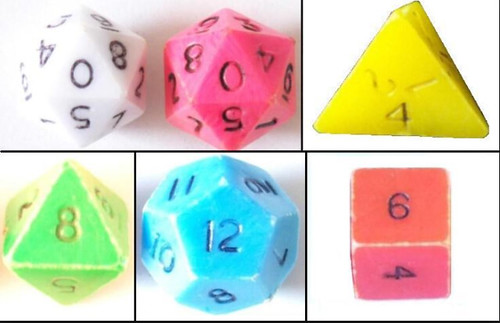 It is altogether fitting you should be wistful.  These are the very first commercially available D&D dice, designed specifically to play that game.  I’m not sure of their provenance, but it is likely they were manufactured around 1980 or so.  Sure, they are (technically, an Octohedran, a Dodecahedron, a cube, a pyramid and two Trapezohedrons, but to an earlier generation, these were the spiff.  Dice MADE to play D&D with.  They were a huge hit.  Everyone who played had a set.  So what if they were crappy dice?  So what if the ink had to be reapplied with a drafting pen, until the edges got so warn and rounded you weren’t sure if it was worth repairing?  So what?  These were D&D dice.  These opaque beauties weren’t much to look at but this is “how we rolled” when we were nestled in Jay’s basement, or my basement, or Pete’s house.  I never got rid of mine, but I did put them in my old 16mm film can, and stored it on top of a bookcase in my study when we moved into our last house in 2000, and there it stayed undisturbed.  When a tree fell on my house last October, we had a flooded basement and had to pitch everything.  Including my bookcases and tons of gaming stuff.  I didn’t give it any thought, but the can (and everything else in my study) was gone.

(going back in time for a moment): Many years ago, my son, then in 5th grade, came home all excited.

“It’s this game we play at lunch time, dad.. one person sort of navigates with words, the other people kind of go through adventures, by calling them out and then we draw maps… it’s really really fun!”

I realized my son was describing Dungeons and Dragons to me.  His very first game of it.  I had never pushed him into playing, or even really talked to him about RPGs.  He wandered there all by himself, and thought he was cool because of his great discovery.  He’s played D&D on and off since then, not every week but on a semi-regular basis.  Now that he’s out of high school, he’s got his first job at a Summer Camp for scouts, as a blacksmith.  I recently got an urgent call from Garrett.  There’s no internet at camp, no cell reception, and he’s bored and so are all the other young men down there.  Would I send him the D&D 5 edition Dungeon Master’s Guide and Player’s handbook?  I was tickled, and said, sure, why not, I can think of worse diversions.  Then I texted him back– “need anything else? Do you have dice?  You need special kinds”  He texted back.

“Got that covered. I found this when they were tossing all your stuff in the rollaway” 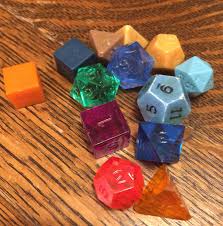 And he sent a picture of a little steel film can, full of crappy D&D dice from circa 1980.  And a few of the sturdier, cooler Lou Zocchi dice, too, from the same period.   I was speechless.   I realized, then, that these were the dice of generations.  They were kind of rounded and old and probably needed a re-inking, but my son, by himself, had wandered into the same hobby I had loved when I was his age.  He was having the same kind of fun we did back then, with paper, pencils, a good DM with some imagination, munchies… and a can of crappy old dice.  Some things don’t have to be the latest and greatest, when you have an imagination.

He texted me later asking “Hey, I didn’t ask, I just saw them throwing stuff out and the can rolled out.. it is okay for me to use these?  We don’t have a game store near here” I texted back… “Of course it is. That’s YOUR dice collection, now.” 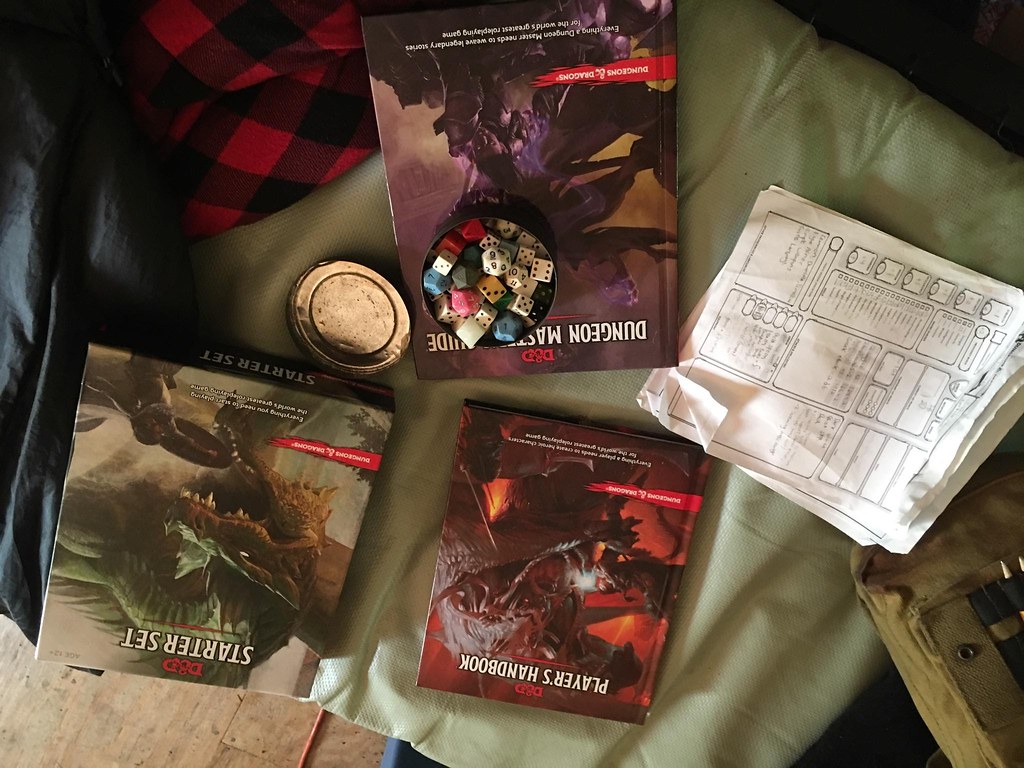 Postscript: Garrett sent me a photo of him setting up for a D&D 5th edition game at the Summer Camp he works at. Note the little 16mm film can full of original TSR dice goodies, still giving good service, 40 years later.