So this Sunday (6/5/21) I took up Pete Megginson on his offer to play some Spanish Civil War wargaming, in person, at his house. We’ve all been vaccinated, it was safe. The scale was 20mm, which seems to be the scale for SCW, and the scenario was the Battle of Seseña. Seseña was a little village on the approaches to Madrid, which was the target of a major push from the Nationalists in 1936. The Soviets had just delivered a shipment of T-26s, and the Republicans were excited to test them in battle. Duly noted, the Soviet tank column of 15 T-26s, under the command of the veteran tanker Pavel Arman, advanced on Seseña, thinking it was being held by Republican troops at the time. All did not go as planned. For what happened next, let’s go to the history books:

At six-thirty in the morning on 29 October, Arman’s tank column entered the village of Seseña. According to Republican intelligence, the village remained a Loyalist town. As Arman rolled toward the central plaza, however, he found the road blocked by a group of soldiers manning an artillery gun. Calling out to them in French, the polyglot Arman asked that they clear the road and let his column pass. The reply was a question: “Italiano?” Arman quickly realized that the town had been occupied by the Nationalists. He ducked his head back into the vehicle and ordered his gunner to fire on the artillery unit. Thus began the Soviet tankers’ participation in the war. — from “Stalin in Spain”

This is exactly where we started the game: 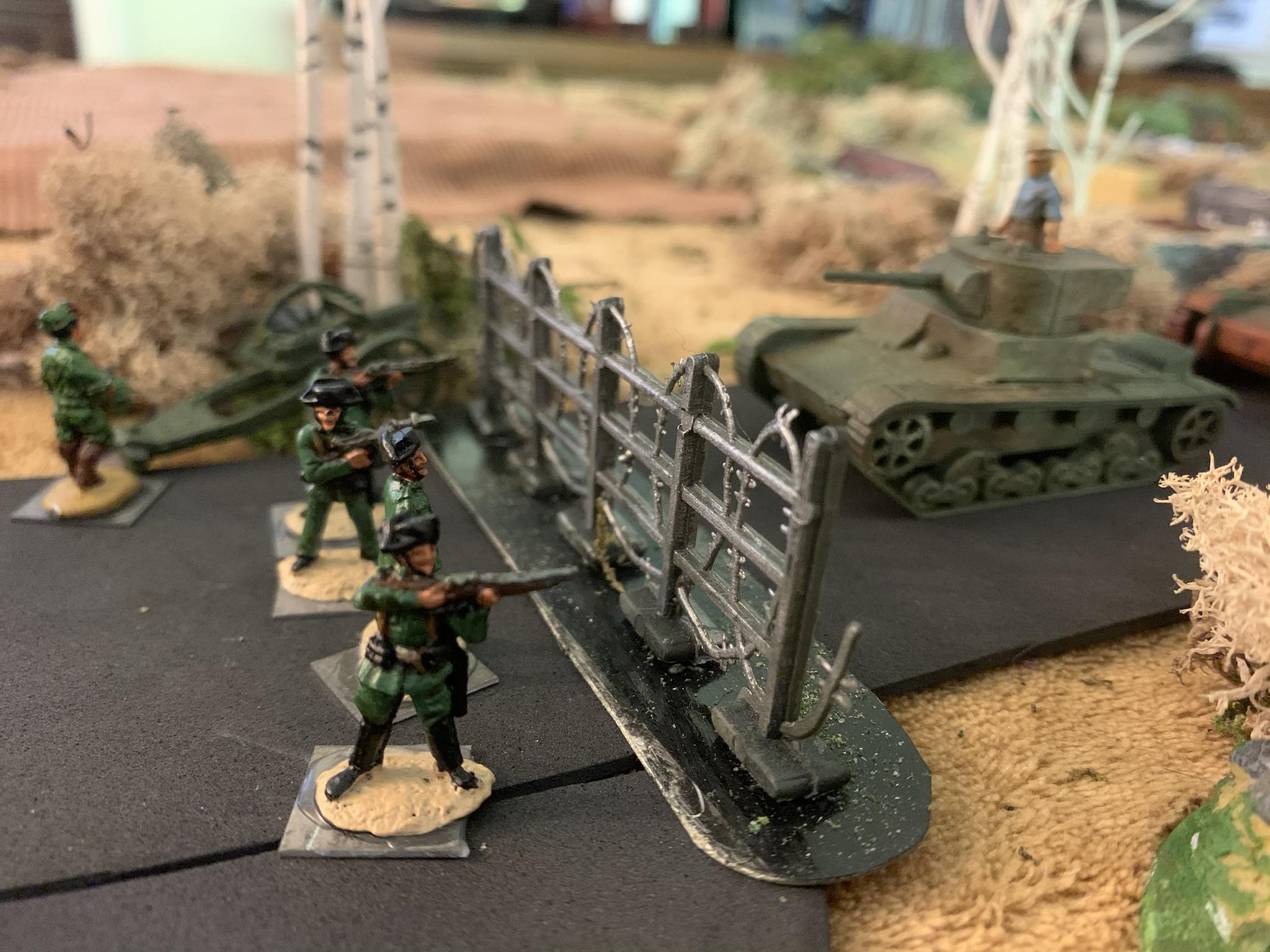 I chose the same response Captain Arman decided upon, and fired at the gnats point blank. They hung around for a round but eventually scarpered off.

The picture above is the battlefield at start, with only the T-26s and a Civil Guard unit being “actually” on the board. The troops on the near edge (bottom) are the Anarchist militia groups on the left and right side of the road, plus a “platoon” of T-26 tanks on loan from the Soviets driving up the road. We drove in and engaged targets where we could see them.

I played the Arman role, and Jeff played the Moroccans. My infantry was rather poor, being two kinds of Anarchist Militia. I had no supporting artillery, a heavy machine gun and a few LMGs and mortars among my advancing infantry. The stars of this show for me was the T-26 platoon (15 tanks historically, down to 4 for a game). 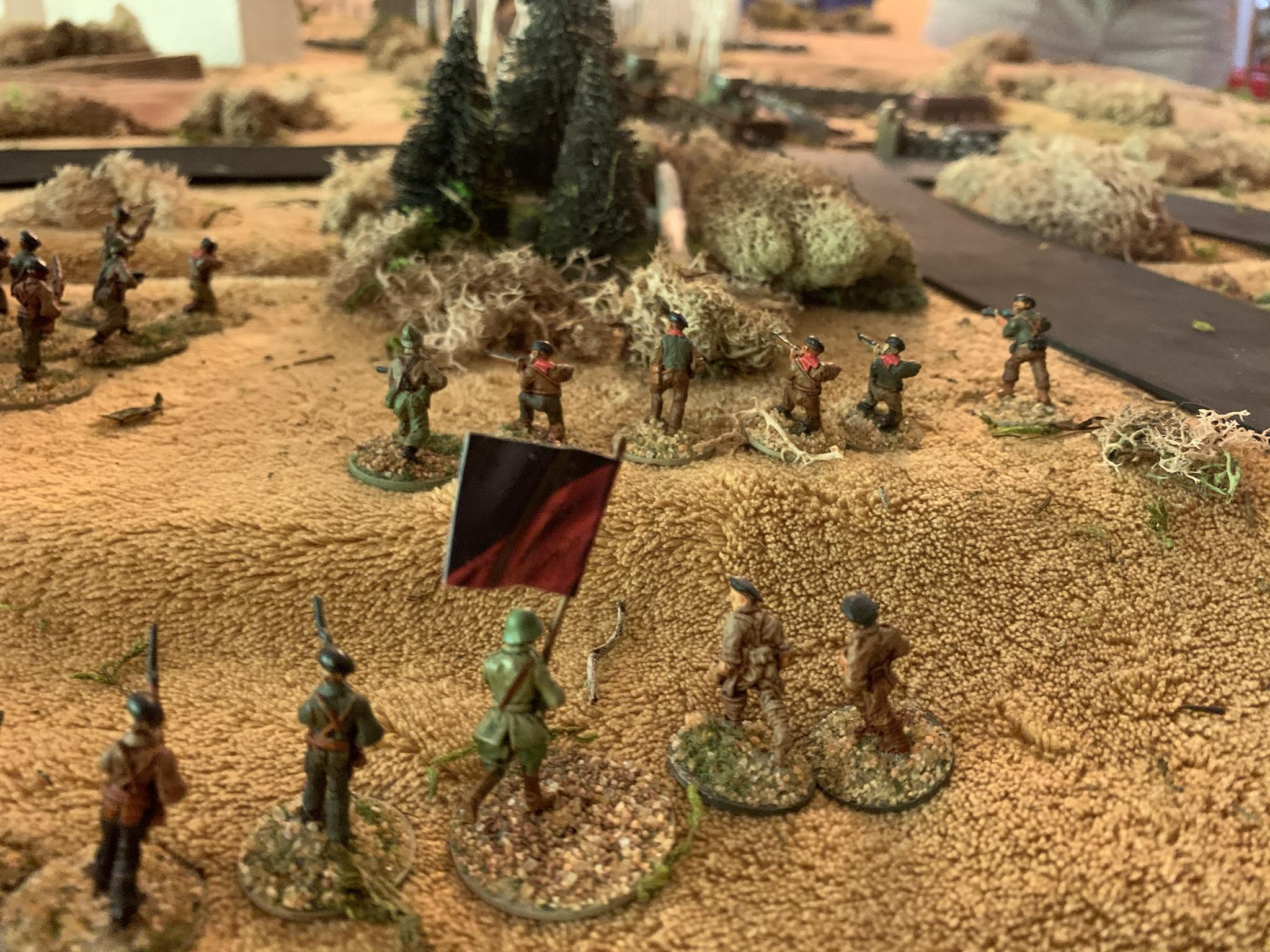 The Nationalist side infantry was pretty good in comparison. The town was held by a large company of Moroccan soldiers, a couple of field pieces and a small force of Italian tankettes.

With the exception of the Tanks and the Civil Guard troops, both sides started off board and moved on board one by one. We were using the Iron Ivan Games Disposable Heroes/Primera Battala rules, which was a learn as you go situation.

The Morrocans quickly occupied the buildings in the town making each building a little fortress onto itself. A touch nut to crack as many of them had LMGs.

Soon, the buildings dominating the space I was advancing across were swarming with troops. This was going to be a hard slog. Do I see a Moroccan in the second story window??

The Armor Leader, Captain Arman, sighted a threat from a Nationalist Artillery piece down one street. He quickly fired upon it, missing it but his coax MG killed two of the crew and forced the others to break. Later in the game he disabled the gun with a lucky shot to prevent it from being re-manned. At the other end of the field, the infantry was encountering a hard slog.

The Anarchists were divided into two different factions, the CNT on the right and the FAI on the left side of a road, respectively. The CNT advanced under better cover, but made slower going. They were taking cover behind the stone walls of a cemetery. The FAI decided to long range cover fire the windows in the houses to keep the infantry suppressed or perhaps pinned to allow the infantry to advance. This resulted in a lot of long range gun fire between a heavy MG on the left and various houses. Eventually the MG was silenced. The Anarchists got lucky with their mortar fire, however, and dropped a round straight throw the roof of one house (see below!)

As you can see in the distance, that at least put the boys in that building on edge, even if they still didn’t break. Mortar is in the foreground. The red chip indicates they have moved.

The CNT? guys on the right got about midway up the board and were in a position to lay down some long range fire on the occupied houses.

The T-26s made it into the town and were in a position to make a dash for the edge (a victory condition), but there were still so many targets of opportunity, it was hard to not stay there and shoot.

The buildings were good cover, but it felt good to shoot them up and make everyone duck. We were on the verge of the Italian Tankettes to meet up with the T-26s at close range.

We weren’t that worried. We could actually RAM these things if we needed to. The Nationalists got some extra reinforcements in the form of Armored Cars late in the game. We weren’t worried about that, either.

That brought us up to our hard stop since Pete had to take his daughter into DC. My prediction was that the T-26s would be able to get out of town without the Nationalists doing much about it, but we didn’t have time to game it out. However, I was more of a mind to provide cover for the Infantry moving up slowly that to just bolt for the edge, so who knows what would have happened. I think I lost more men than the Nationalists did but we were on one unit destroyed each. So, yeah, maybe a draw.

This was my first experience with the Iron Ivan Disposable Heroes/Primera Battlaia rules. They were quirky, but reasonable. I really enjoy gaming in this period but haven’t’ found the perfect rule set to play it yet. In my opinion, if you can’t capture the political undercurrent of the war in the rules, then you are just playing another world war 2 era fire and maneuver game. The political/chaotic events were capture in this game by a table that Pete Megginson created that we rolled on every turn. It worked, in general. There were some quirky elements to these rules– weird things like you can only fire half of a rifle element in a turn. I got the hang of it, I think. I’d play them again.

I was really happy to get some of my own pieces on the board (the Civil Guard, T-26 tanks, Artillery, etc.). I’m inspired, I may paint up more troops.