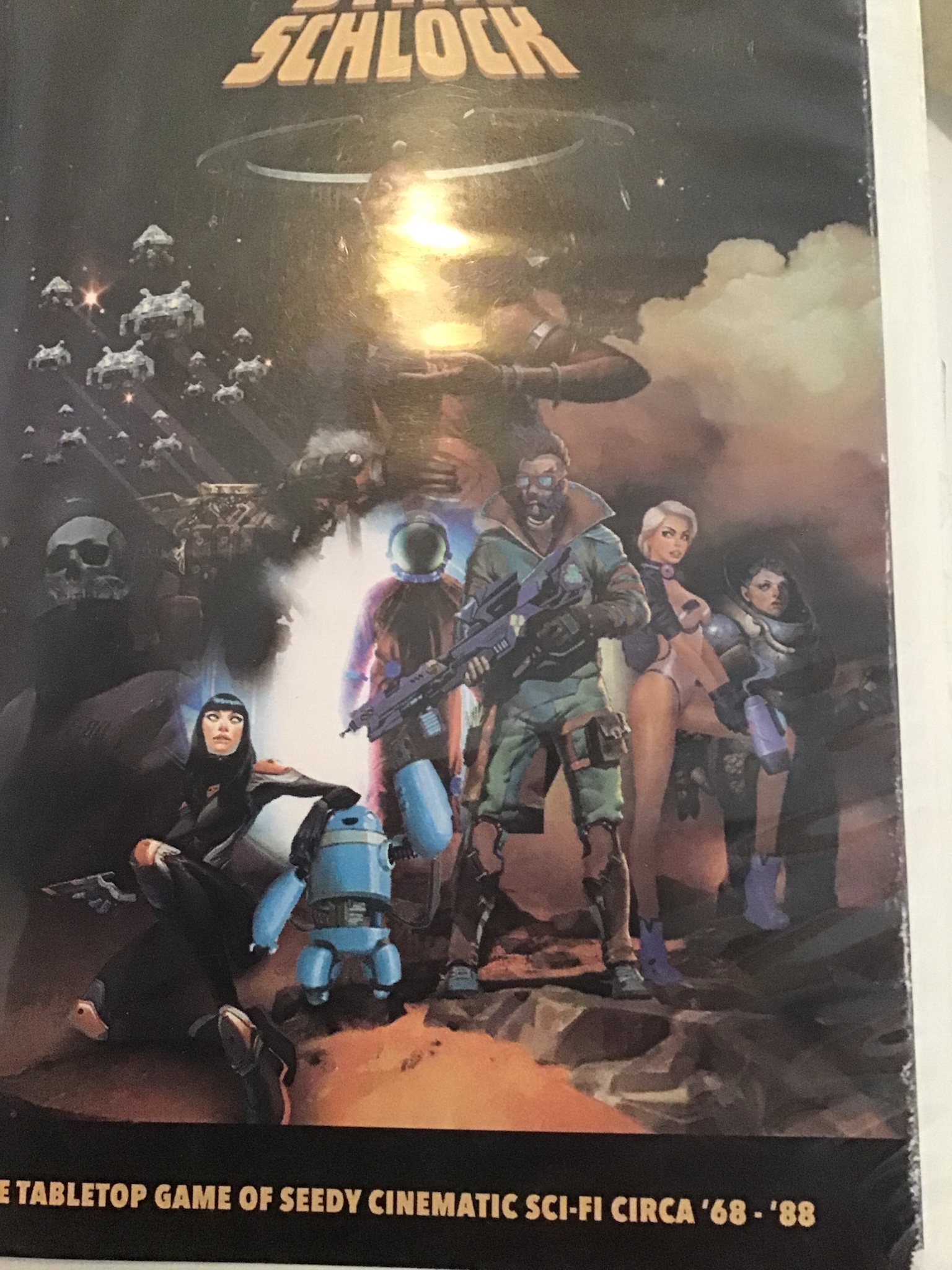 Meta note: The crappy pictures are my own from my Ipad.  The nicer ones are courtesy of Ms. Ellen Levy who did a fantastic job of recording the game as usual.  Permission was granted up front.
EDIT: It’s STAR SCHLOCK, not SpACe SCHLOCK.  Whoops.

Friend and fellow Scrummer JOHN SEARS (whom you may know from the 1000 Foot General blog) is working on a labor of love called (at least for now) STAR SCHLOCK.  John will correct me if I get the particulars wrong, but Star Schlock is a small unit skirmish game, with units roughly being 5-10 individual figures plus individually based special characters.  The setting is .. hmm.. well, the kind of B tier science fiction movies from the late 70s or early 80s you would associate with being Star Wars rip-off genre films in a science fiction setting.  Battle Beyond the Stars would be a perfect example. John is working on transitioning from design to development so he requested the able assistance of the Scrummers to do a little Alpha testing.  Four active players showed up so each of us got a small command.   There were two “Evil Empire” commands and two “Rebels and local Alien Freedom Fighter” commands.

I also had two groups of the rather hapless looking local aliens.  These were based on a limited series created by Lead Adventure Forum, now sold by Magister Millium.  I love their clunky look.  I’m going to have to get some.

The teams were “The Duchess” whose goal was to escape the board. She had two units of household guard in bright red capes.  Doc Owen’s goals were to get one of the opposing leaders (Captain Vrock, or the Alien Overlord) to become a star crossed lover with Cadet Owens, (the Doc’s daughter).  That would make the leader defect to our side.

This John’s game design for science fiction skirmishing and it had a lot of moving elements to keep track of. An interesting feature was the command deck each faction had available to them. Each card had a numerical rating up top and a symbol.  These would come in handy for initiative and game mechanics.

Mechanics were a mix of theatrical and practical– John unabashedly borrows from a lot of sources. If you’ve ever played a card driven wargame you’ll figure out the initiative system reasonably easily. You get a deck of cards. The cards are color coded for type of action, with a symbol code that breaks ties and gives you a special interrupt chit for the next turn.  I started thinking this was a bit clunky but I ended up liking the idea a lot, since I was using it to attack in advance of my opponents.

The combat was relatively bloodless.  I say “relatively” as it was mostly morale based.  Units get eliminated by making them head for the hills (breaking morale).  Actually killing a figure is kind of tough but when you do it impacts on the unit morale (which if I’m remembering it right, can be fixed with one flavor of those interrupt chits)

Even big shooty and splodey things weren’t exactly deadly lethal.  The Evil Overlord had Orbital batteries he could take advantage of, but even a close to direct hit only shook my guys and made them run.

What I liked about Star Schlock was that it was a true cinematic game. The mechanics are a little thorny at first but really they are just there to make the narrative work.

For instance, if you look at the unit sheet I posted above, you see that I have two characters, Doc Owens and Space Cadet Owens, fighting at the side of the resident aliens.  Doc’s pretty cool, he has a big space gun that’s vicious at close range– but his daughter, space cadet Owens, has this whole romance sub plot thing going on that was infinitely cooler than pew pew pew laser fighting!

Essentially my character had an ability to make a leader from the opposing side swap sides and run away with her.  For big, big points!  You just need to be in the same grid quadrant as the target, roll against something (it was a very hard roll to make) and if you win, they lose a leader.

Of course, my targets were sparse. You’ve seen the Evil Overlord. This was my other choice. Well, the forehead bridges lent him a certain nobility. SO it’s ON, baby!

So I spent a good deal of the game leaping around with my jet pack to flank around Captain what’s his face and try to charm him to our side.

My luck was spectacularly bad in being charming.

Fortunately while I was busy being a good target and hapless and all that the Duchess exited the board, achieving HER victory goals.

My luck had been pretty bad all night.  I barely hit anything I shot at, but did cause some morale casualties.  If we had pulled off the Romance sub plot, I think we might have pulled out of there with a victory.  As it was I had a great time.  John Sears did a fine job of designing this game and even better making it system independent– ergo it’s not written for a line of minis.  You should see the artwork on the cards and such, all designed and laid out by John.  Space Schlock communicates its ability to not take itself seriously and be entertaining.  I can’t wait to see it as a commercial product.

Note: I took some crappy IPad pictures myself, and Ellen took the really good ones.  I’ve put most of them here on Imgur if you want to see more from this session.