After hearing that our local library system generously offers up 3D printing services, for free, to library patrons, I decided to start taking advantage of this service. I’m really glad I did. The combination of cheap, easy browser based modeling and slicing tools (TinkerCad), giant repositories of existing models that are cropping up all over the place on the web (most importantly, Thingiverse), and most importantly, an affordable way to turn the printouts into tangible things you can touch and use is just a fantastic combination for me.

I know, I know, this is probably old hat for a lot of you. Understand, I have wanted to get into 3D printing for a while now, but I found the idea of learning sculpting using Blender to be incredibly daunting. I’ve tried in the past– back when anything you wanted to create for printing, you had to create out of nothing. That was a tough road to hoe. With the advent of Shapeways and Thingiverse (and other repositories of models, many of them free), the lazy man can rule as king!
It all started when I started being a regular customer for Sea Dog Game Studios. They have been getting in to rapid prototyping of nautical themed pieces for the last couple of years and it really intrigues me. I don’t anticipate becoming a great sculptor.. but here’s the thing, I don’t really need to be one. I’ve found the base model for hobby game elements that I am interested in on sites that offer models for free under the Creative Commons license. As I show above, my first tentative touching of toes to water was for Cruel Seas. I had bought a generic freighter prototype in 1:600 scale from Sea Dog studios and it didn’t come with any ships guns. This won’t do for a game of small ship warfare in the English channel. Not one bit! Finding new guns to buy seemed a little problematic. So I went on Thingiverse, and sure enough, there’s a file for this kind of ship weapon. I made the mistake of sending each gun to print individually, which isn’t smart if you’re using a library system. Fortunately I attended the library’s open house workshop on 3D printing (held every Tuesday) and they kindly went through the process with me.

Using a product called Tinkercad**, the lady at the library patiently showed me how to add a bunch of objects to a single ‘plate'(the area you print things on).
So for my first project, I went the practical route. I run a lot of miniature games set in the Mad Maximillian 1934 universe. Thus, I have a requirement for 28mm scale, reasonably period authentic weapons I can add to car conversions. Now, I could continue to order stuff from a miniatures dealer (in metal) or I could try my hand at 3D Printing a bunch of them at a time. Why not?

As you can see from the picture above, the first results were mixed, but very hopeful. With a lot of cleaning, the Maxim guns are very useful. Up close, they won’t ever be better than metal, but from the 3 foot test point of view they are perfect. Here’s a set of twin Maxims mounted on the wing of a model plane I’m putting together for my next Mad Maximillian game at Historicon.

I’ve only just started doing this kind of thing.. but already I’m shopping around for a 3D printer for myself. The potential for this technology is staggering. If it can be imagined, it can be accomplished… in scale, and within limitations.

After some frustration with the white batch of support weapons, I sent them again with a different filament. The gold filament is much easier to clean and looks a lot more detailed.

I’m getting the hang of it. I still don’t think I’m going to learn the higher end sculpting packages any time soon. Blender 3D is an ambitious program with loads of features but hugely complex. You can’t beat the price point, so I’m going to give it a shot eventually.

My next project is a viewing stand for Benito Mussolini for my Historicon event.  Here’s an early picture of the work in progress. 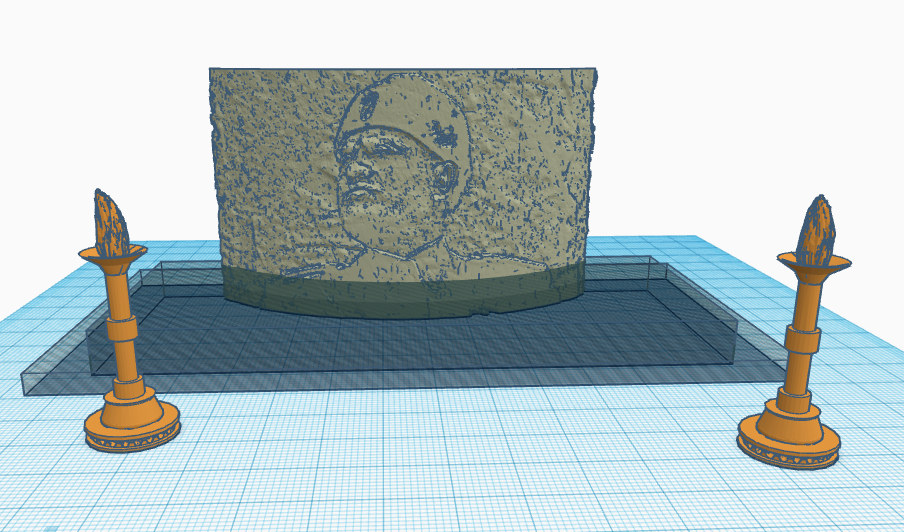 ** For all of you tech savvy types that are grinning about me using TinkerCad, understand this post is the ramblings of someone just getting into the whole 3D printing concept now.. with virtually zero experience. So yeah, I’m enthused about simple things right now (and probably for the foreseeable future). Just nod and smile, people.