.. of all places! This may not seem like that big of a deal for most of you readers, but it is for me. Sunday marked the first time since the reconstruction of my house that I’ve actually had someone over to play games. It felt historic. 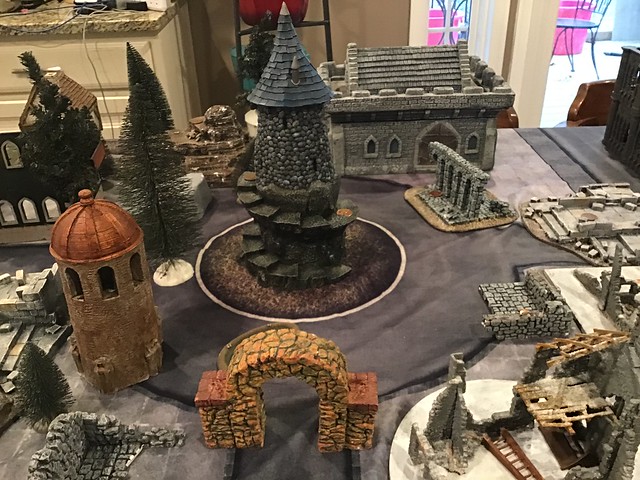 Felsted in all its thawing glory

Audrey approached me with an odd request from one of her co-workers. Her son, she said, had expressed a desire to play “longer games, not video games, but the kind with rules, where you move pieces around and sit around a table“. The thing is, she said.. “I have no idea what he’s trying to do here, and I’m confused.” Audrey said “You have come to the right place, do I know a guy for you!”  So, with Audrey acting as the middle-woman, I ended up hosting some young fellas at my house Sunday, running an out of the box game of Frostgrave. 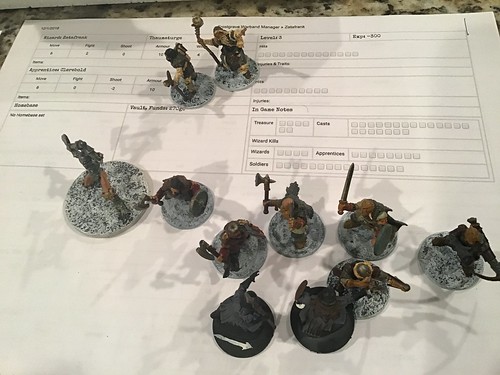 One of the five warbands I had ready to play

To save the kids time and confusion, I had four pre-rolled Warbands that I have set up for fast play.

I gave the kids the option of selecting four slots out of five.  They chose Udoxekius, Zatafrank, Diveth Fyr and Izkius.

I created a simple set of victory conditions.  First player to collect three treasures (or the first Wizard that died) ended the game.   I played Zatafrank, who is one of my campaign Wizards with a slightly larger party.  Zatafrank is rather weak on the offensive, relying on his warband to take the fight to the enemy and his one or two allied college spells to supplement Healing and Miraculous Healing. 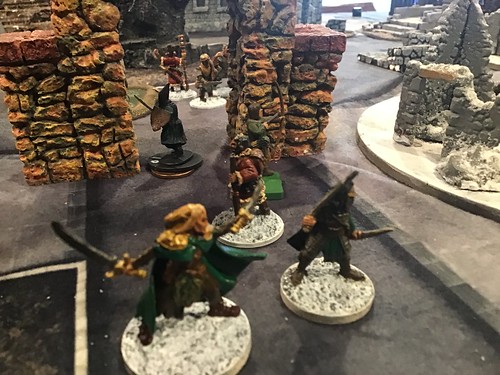 Udoxekius learns how to move in cover.

Udoxekius took a cautious stance, hovering near the map edge and getting a treasure token (pennies) early on. His party locked horns with Zattafrank early on– maintaining some distance but definitely engaging. His first move was to move his Wizard and Apprentice out into the open ground. Zattafrank’s archer taught him a lesson in moving under cover and keeping his head down. 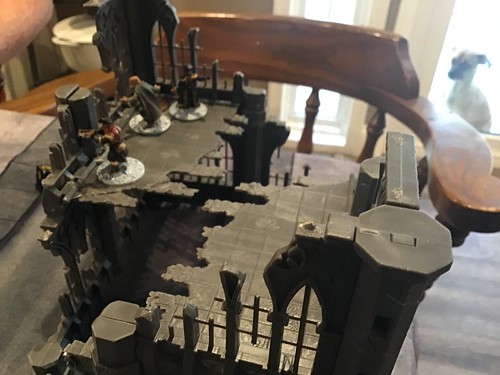 Izkius gets to the high ground

Izkius took to the high ground early and got up to the second floor of the ruined cathedral. Ben, the player running Izkius’s warband, understood intrinsically the idea of line of sight, moving in cover and demonstrating initiative. 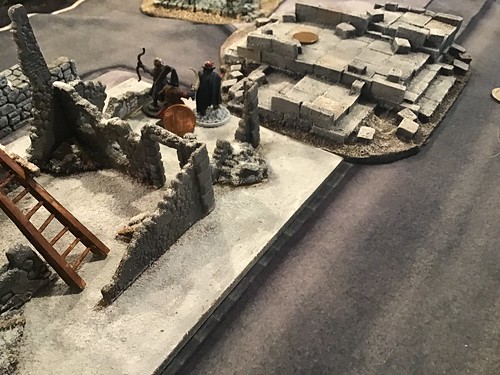 Izkius deploys his men in the ruins 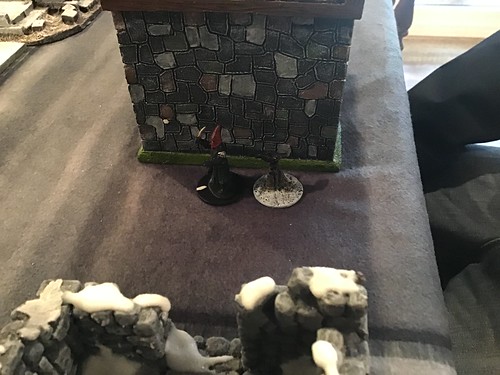 Izkius brought along a crow master and found him to less than advantageous.

Over at the Government House, Diveth Fyr came in from the far side of the map.   The Government House was a large, still intact building with evidence of treasures.  Diveth Fyr was a little apprehensive, however, because he was getting a strong sense of Deja Vu from this one. 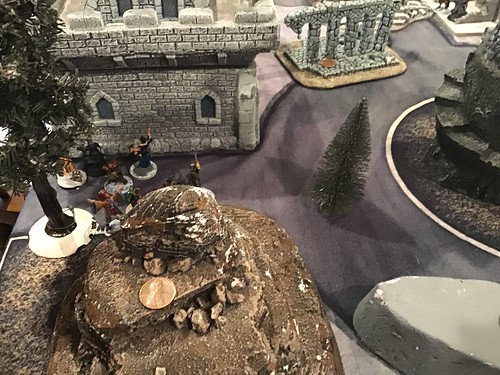 Besides, there was plenty of treasure on the ground already.

Diveth Fyr did exercise his specialty, summoning a minor demon.   It was pretty hideous to look at. 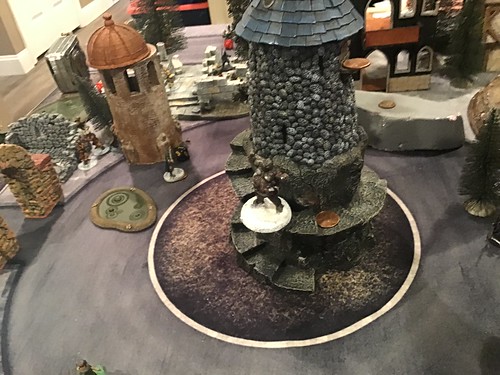 .. But handy for picking up treasures!

Meanwhile, Zattafrank’s archers are teaching Udoxikius’s men to keep their heads DOWN. 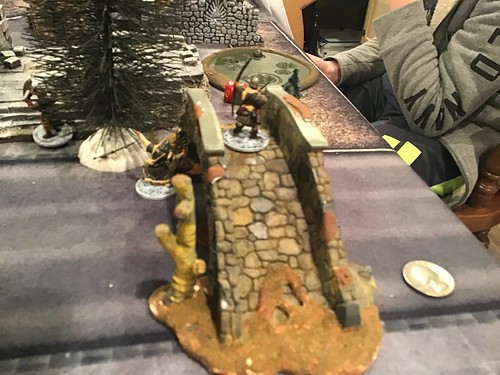 It’s called “the virtue of the high ground”, youngster!

Zatafrank really brought the fight to his foe, which was, locally, Udoxekius.  Here is his small gang of hirelings mixing it up with Udoxekius in bloody hand to hand. 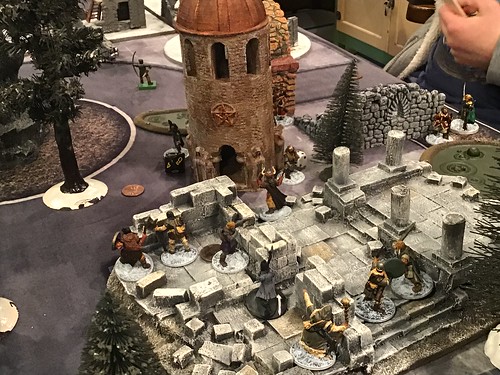 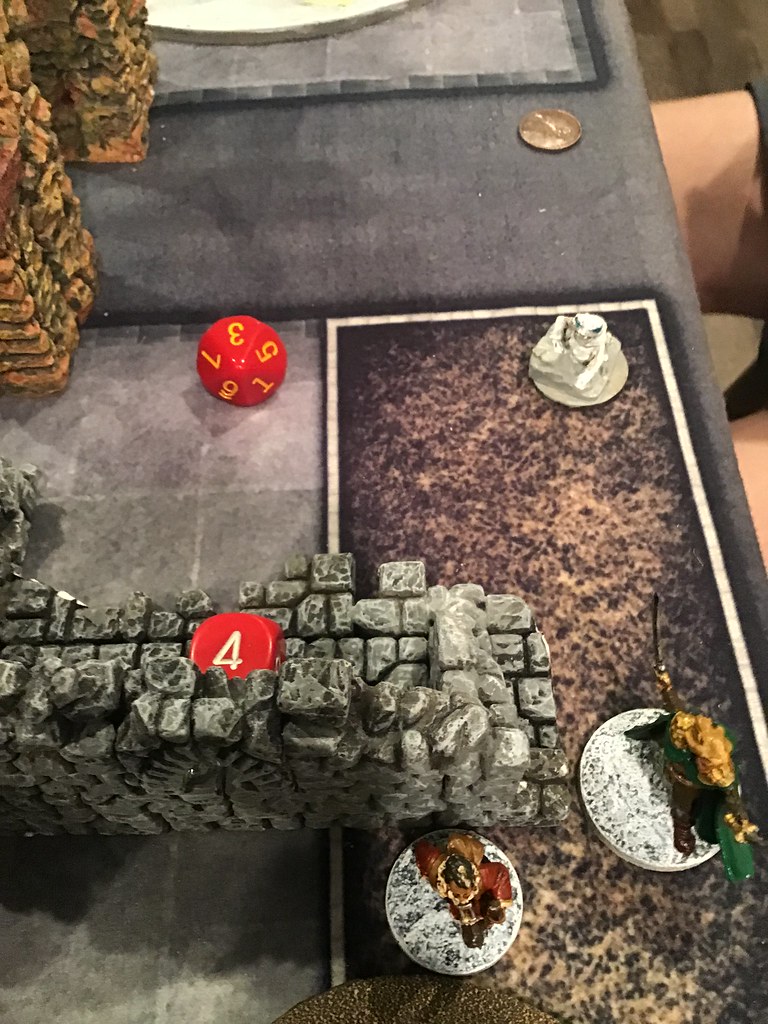 Towards the end of the game things got a little silly, as often happens with young males.  Diveth Fyr’s men opened the back door of the Government Hall, took one look at what was withing, and closed it rapidly.  Diveth sent out his demon to grab treasure tokens and Izkius took the opportunity to cast TRANSPOSE.  This made Diveth’s demon show up amongst Udoxekius’ warband.  Talk about a hole in one! 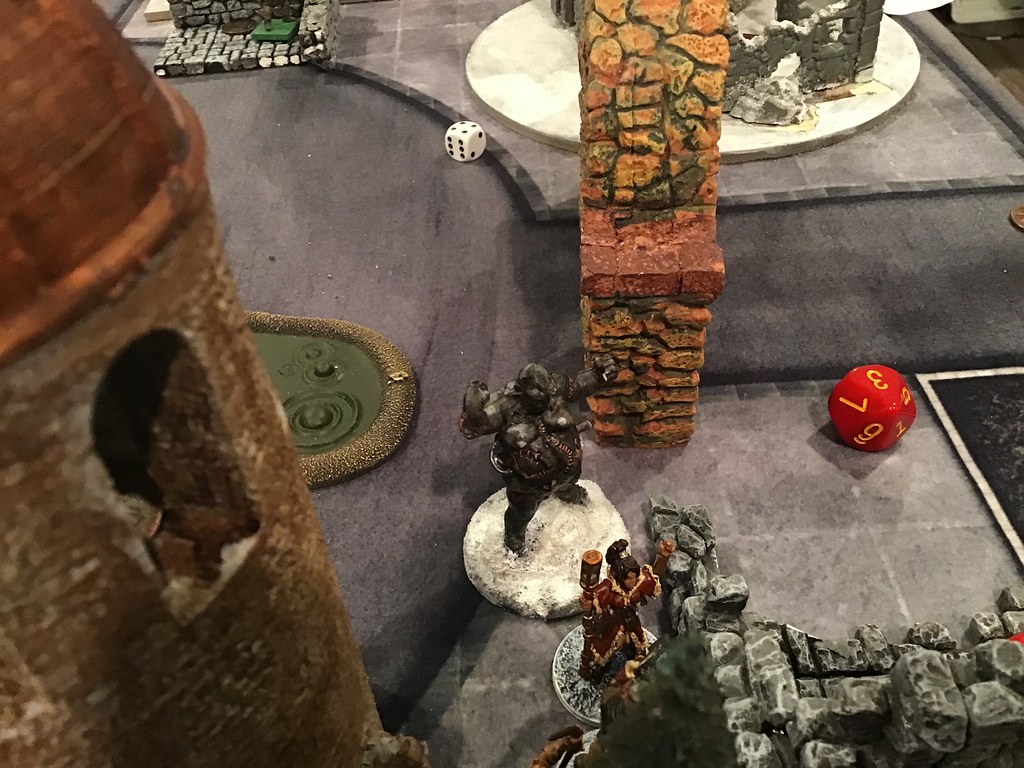 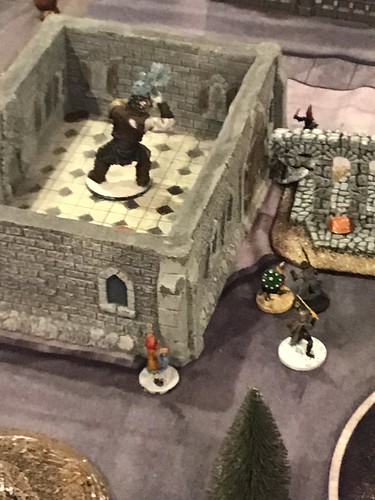 Man, that joke NEVER gets old.

We had been scheduled to play from 11 to 2.  In reality the game stretched to about 3:30.  Right about here the conditions for game stop were met and someone got the 3rd treasure off the board.  My two Frostgrave newbies really enjoyed the new experience. I think they were expecting something like Magic: the Gathering or Dungeons and Dragons, and were kind of pleasantly shocked about how fast Frostrave plays and how easy it is to pick up.

So, in retrospect, I may have created a couple of converts.

HERE is every photo I took of Frostgrave