A Raging Weiner in the Aftermath


You can’t say I’m not Johnny on the spot when it comes to trends.  GASLANDS (the Osprey car combat wargame in the blue series) has been out for what, like a year now?  I just got around to playing it for the first time last Saturday, despite it being this year’s new hawtness…  GASLANDS has caught on with many communities and has an appeal across age groups and with non-traditional gamers.  I think the appeal is in the easy mechanics and the artisan element with the vehicles.  Everyone seems to be in to converting Matchbox and Hot Wheels cars into Post-Apocalyptic death machines.  Some of them are pretty outrageous.  The thing about kitbashing post-apoc vehicles is it’s habit forming.  I should know, I have about 60 of them.. more than I’ll ever need, but that was for another game.  So when John put the word out for post-apocalyptic death rides, I maybe had a few. 🙂

My favorite vehicle from my collection is the Post Apocalyptic Oscar Meyer Weiner mobile, which I call the Raging Weiner.  So that was my first vehicle in our test game (btw, everyone there (Jared, Francesco, Zach, Joe, and even John were new to Gaslands).  John ran a kitbashed Monster Truck with a Quad 50 on the back that was totally badass looking (you can see it in the picture above).  He also provided a mid sized sedan and a complicated pickup truck rig with a guy in the back giving an oration.

In the first game, John drove in from the side, and Joe attacked with the sedan.  My first encounter with Zach to my right ended up with me skidding out of reach, where I turned on John’s monster truck.   The combination of Joe’s accurate fire from the rear and me shooting at him head-on provided a… less than optimal result for John’s monster truck:

That had me barreling straight at Joe in the combat sedan.  One of the fun elements of Wasteland’s maneuver system is that you’re not ever really sure where your car is going to go.  At the start of the turn, you place a template indicating where you WANT to go.  Then you roll some special Gaslands dice that tell you what ACTUALLY HAPPENED.  Depending on the speed of the maneuver, you can get a number of “Shifts” (good result, it can be used to make a bad thing go away or a damage token get removed) or “Spins” or “Skids”.   The latter two can make your car  change orientation (if a Skid) and rotate to any point (if a Spin).    So after I got the killshot in on John, I was facing Joe head on, then went into a skid.  Bad news.

So I dodged out of this 90 degree angle due to timing– I gained initiative before Joe and managed to duck out of the way.  That may seem gamey but it does accentuate the nature of what is being simulated here– cars are always in motion, hard to control and Chaos Ensues.   At that point, Francesco zoomed into the battle area and I managed to get a shot on his right quarter panel before he went by me.  Francesco was a man with a mission…

His mission turned out to be a meeting with a rock at speed 6… where your options tend to diminish.  I never even made it to speed 5, myself.

That’s not the worse  of it.. Suddenly I had new friends….  We had a rule that if you got knocked out you could come back in a buggy, and suddenly I had more targets.

Since so many people had blown up and the pizza was about to show up, we cleared the table for the next game.

Our appetite for destruction having been whetted in the previous game, as it were, the GM (John Sears) suggested we work with a rule of thumb build list of 35 points.  Almost all of my compadres in this game built up rolling death machines with lots of secret weapons off of the GASLANDS build-a-car buy list.  The two exceptions were Francesco, who put a giant-ass bus on the table with a machine gun turret on top, and myself, who opted for a solid, up-armored VAN Class vehicle with a turret MG and not much else, plus ONE Motorcycle with Sidecar (with heavy MG mounted).

We didn’t have as much time to play in this configuration, but it was short, dramatic and sweet.

So there was a lot more nuance in the second game, which pretty much played out until we could harpoon the Deathbus like the great white whale (or perhaps more appropriately great filthy yellow whale).  I did not perform as well in the second game, as once the annoying giant Deathbus fell to much gunfire from all concerned, the next largest target was my giant old timey delivery van (which got called “the Fire Truck” due to its brick red primer paint job, but it really wasn’t).

At this point, it was getting late for me.  10PM isn’t that late but I had about a 45 minute drive ahead in the rain.  GASLANDS plays pretty well and is pretty elegant in terms of how the component bits (tokens, dice, and movement templates) all fit together.  I really, really like the Maker culture attached to this game from day one.  In a greater sense a lot of the product development has already gone beyond the original publication and now there are tons of people out there writing and publishing house rules, 3D printing templates and tokens, and generally making this game their own.   I’ll be honest, I hadn’t been a huge proponent of Gaslands as I had already been through a big mad max phase in 2016 and 17 for Game Camp (see White Line Fever) but I take all that back.  I’ll play Gaslands as a go to game any time.  It requires nothing much I don’t already have in terms of components– I already have 60 plus cars, 20 bikes, and a bunch of pedestrians and terrain pieces to support this game.  I’ll be happy to have a return engagement.

A slideshow of everything Wasteland (and there’s a lot of it), here 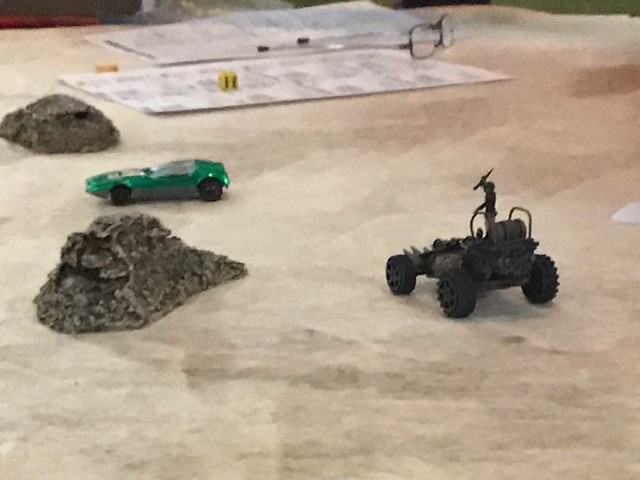 If you are on Facebook, check out the bitching little video Joe made from all the stills that were taken that night.