I know, I know.. I keep saying “That’s IT! I’m done doing vehicle conversions for Mad Maximillian 1934!“, but I have to admit, it’s fun, almost a hobby in itself.

The latest and greatest vehicles on the table utilize a couple of diecast 1:43 scale vehicles from a Russian toy company that produces historical models based on their own history– in the Soviet phase.  I’ll be danged if I can remember the manufacturer (I can’t read Cyrillic), but here you go:

The old Soviets were crazy about having Scout armored cars in their armored ranks, and they made ton of different kinds.  One of the earliest, and ironically, with a production year of 1934, was the BA-20.  Under-powered and thinly armored, it was only produced in limited numbers.  In common with most armored cars derived from cars, the BA-20 was largely road bound. The lack of all-wheel drive, high ground pressure and low power prevented it from moving cross-country except on very firm ground. The armor was too thin to stop anything other than fragments or small-arms fire, and the 7.62 mm machine gun was not adequate to penetrate other scout vehicles– and yet it saw service on many fronts, including Manchuria, Spain and WW2.  For some reason this mediocre design concept seems to strongly suggest a vehicle for Mad Maximillian 1934 to me. 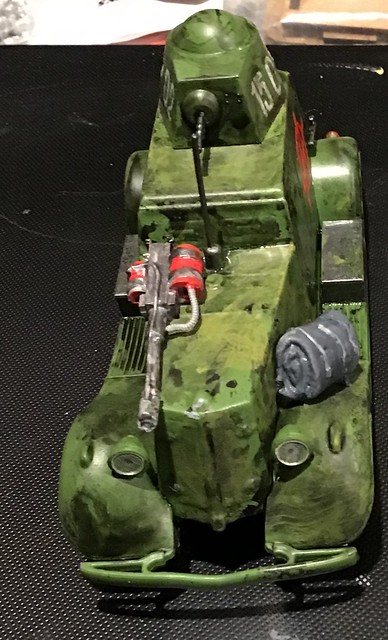 My vision for this vehicle was some team either appropriated or somehow got their hands on surplus vehicles from the Soviets in the early 30s.  Soviet Armored Cars have a certain visual aesthetic I like, so I was glad to find a manufacturer in 28mm scale.  This one appears to be a much battered, much tinkered with veteran vehicle currently owned by an Anarchist group.

Next, and continuing with using cheap re-purposed Soviet stuff, I present a GAZ transport truck with tons of slapped on welded metal… the venerable GAZ-4.  The GAZ was almost a direct ripoff of the Ford Model T pickup.  This was the vanguard vehicle for an entire generation of transport and passenger vehicles produced by the Soviets from the late 20s onward.  The GAZ was the workhorse of the Soviet Army and many of them were produced.  This one happens to be reasonably period authentic for the Mad Maximillian period setting.  I am purposefully not doing a lot of vehicles in recognizable period national markings.  My intention was to make this one look like a vaguely defined paramilitary transport truck with a decent gun in the back.  I add some piece armor on here and there (styrene) and a bolt-on, somewhat anachronistic anti-tank gun next to the driver (A PIAT).  This model needs something.. maybe another layer of grime.  It’s too clean. 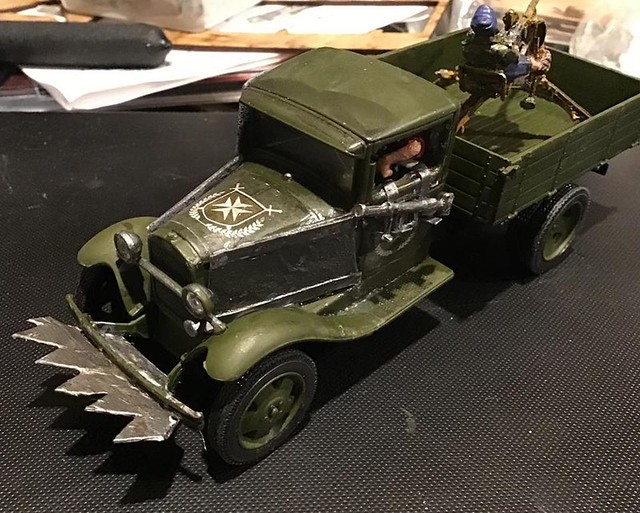 I’m not sure of the source at the moment, I just know there seems to be a reasonably affordable vendor of historic Soviet era military vehicles in various scales operating now, and they make one in 1:43, which fits Max 34 perfectly.  I found these on Ebay.  I realize I am probably way overpowered with vehicles now, especially for my upcoming FALL IN! game (called Junkwaffel, see sidebar).  When you add Jon Lunberg’s collection to mine, we’ll have about 25 to 30 models.  That’s okay; we would be insane to run a game that large but it’s great to have a wide variety of vehicles to choose from.  These two vehicles are Junkers class by my definition, which raises the number I have to four. I hope to see you all there!