As you know if you read this blog from time to time, I’ve had kind of this thing about the Mad Maximilian 1934 game from Mana Press, car models produced by my old friend Nic Robson at Eureka Miniatures.  I like the time period, I like the technology being represented and I’ve enjoyed converting the vehicle models to use in the game as past posts might indicate.  Last Saturday was my first time running an actual of Mad Maximilian 1934 for a group of real players, namely the gaming group I play with, the Second Saturday Scrummers.

I am signed up to run this game at Fall-IN this year, so I appreciated their kind forbearance and patience.  It was a learning experience.

We had four players at start: Joe, John, Rich and Steve.  Since I have enough cars for a large squad, we ran two vehicles per player.  Every vehicle type was represented– Junkers, Jalopies, Motorcycles and Buggies.  Jared arrived late and I gave him a team of Pedestrian Ambush types– and assigned him a goal of capturing a vehicle.

Now a word up front.  I admit, I’ve read the rules a few times, and in general, I don’t have any arguments with the mechanics or the logic behind them.  Almost everything you do, as I’ve posted about in the past, is a series of opposed roles– bad things dice versus good things dice.  Only in this game they are called Fate dice and Fortune dice.  To run a game, you have to have a fist full of two kinds of dice– both six siders but colored differently, so you can differentiate.  Almost every situation you get into in Max 34 involves a challenge of some sort.. taking a turn at a certain speed, jumping over a log (or pedestrian) without flipping, shooting a target while moving, etc etc.  This is determined to be a X Fate type challenge plus modifiers.. against which you roll Y Fortune dice. The difference yields a certain amount of points.  If it’s gunfire, that’s the damage points applied to a vehicle.  If it’s a maneuvering situation, it is the amount of points until you skid.. and so on and son.

I’m mentioning this because, well, I got their basic idea.  I want that known up front.  However, playing it with real live humans with experience in this kind of thing turned out to be pretty challenging.  I’ll get to why..

Immediately, I messed up initiative. It gets a little complicated when you are running more than one vehicle and you are ALSO running mobs of pedestrian figures with murderous agendas.  It reads like this (red type my comments):

As mentioned, players take it in turns to activate their units in Initiative Order. The player to activate the FIRST unit of the round is the person whose team includes the vehicle that is currently moving at the highest Speed! (but what do  you do if everyone is going speed 0?)
In the case of a tie then the vehicle with the smallest Size wins.
(does that include Pedestrians? I would think they are the smallest unit– they all are moving at the same speed, right?)
If there is still a tie, then both players simply roll a dice: the highest must go first.  Once the Initiative Order is determined at the beginning of the round, it will not change – regardless of crashes, rams, explosions and random acts of paranormal activity.

The above works well if you already have units moving, but at start it was a little confusing, so we did a rule of thumb rule of smallest to largest (by groups of vehicles, not individual) then pedestrians move.  The thing is we forgot to switch to the rule book approved initiative until mid-game.  egg on my face.

A complicating factor is how to depict the relationship between vehicles and pedestrians.  Pedestrians are defined as “units” earlier in the game and then not much is spoken about them.

This approach was a little problematic, as really the only actions specifically defined by the rules that pertain to pedestrians were when they move (initiative and activation, page 6), firing their weapons (attacking, page 17), and firing penalties and bonuses (page 19).  Pedestrians watching a vehicle speeding by will have some severe penalties (for car in motion, range, etc), so the only thing that might overcome that would be bumping up gunner skill.  As small arms aren’t defined in the rules, I gave rifles and shotguns two Fortune Dice (the dice you roll to hit something) and pistols  one Fortune Die.  The odds of any single figure hitting what he is firing at are slender, but if you have a gang of figures firing all at once, the odds increase dramatically.

John ran an armored Junker armored wagon, and also a motorcycle plus sidecar (which I classed as a Buggy in the game, just to experiment).

Lastly, Joe snagged the old Ford Pickup (up-armored to “Junkers” status) and the Bugatti (Jalopy class). The Ford Pickup was unique in that it fired a harpoon. Yes, we had to invent rules for the harpoon on the spot, but that wasn’t so hard.

As mentioned,this was a variant of Scenario 1, Death Race, modified.  Instead of a straight shot to the finish line, I placed gates for players to race in a large circle.  There was a grand prize (fictional) in case we wanted to run a campaign and resurrect the same vehicles for that one, so that the players could buy more supplies and repair their vehicles.

How it played out

The concepts aren’t that tough to grasp but the rule book kept stymieing me.  “Where’s combat again?” Flip flip flip flip.  “Where’s this little nuance that is incredibly important right now?”  Flip flip flip..  I don’t believe the rulebook is edited or organizedparticularly well, and the game BADLY needs a few things explained, and maybe a central cheat sheet to tie all this stuff together.  All too often I found a key thing I’m looking up buried in a paragraph, in a section that comes much farther in the book then where I started.  We ended up getting most of it by the end of the game, but we were still improvising new things by the last turn, which isn’t a good sign.   For all of that, I didn’t mind it– there’s a lot of fun to be had in this setting, and we definitely enjoyed the game.

Joe and Steve seemed bound and determined to win this race, while the other guys were more in it for the laughs and messing with each other, which is also great.  Jared showed up late and I immediately gave him the Ambush Bugs, a special squad of dudes I put together that are designed to mess with the racers.  One is a Sniper, most of them have some version of an automatic weapon and there’s even a couple guys throwing dynamite sticks and a bomb dog.

The terrain had a very real effect on the race.  I was going to put out a lot of buildings for pedestrians to hide in and shoot from, but  I don’t think I will next time.  Maybe just two.  The creek bed had a real effect on the southern border of the race course, slowing almost every vehicle that tried to cross it, unless they rolled very well.  The arid style ground cloths and rocky hills worked very well, channeling the race and creating challenges all their own.   There was a lot of bumping and ramming and minor collisions here and there.  Nobody flipped, there was only one crash and it was relatively minor.  Of course, we had to figure out how to drive over people who got in the way (in this case, armed rabbis.. oh, the carnage!).

So we all got around the table.  If memory serve, Steve (who was focused) managed it first, Joe next and John after that.  As confidence with the rule book grew, we ended up having a great time. 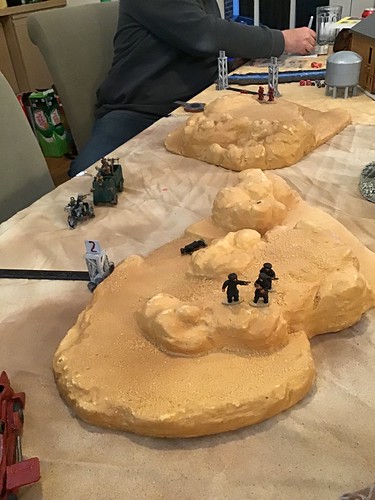 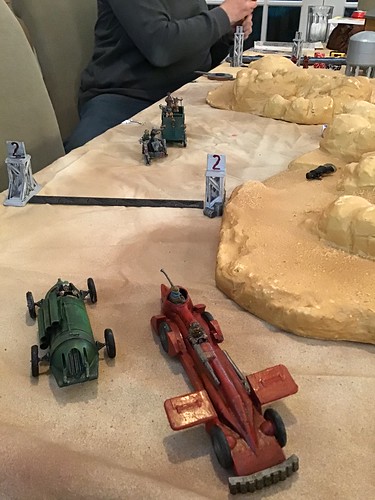 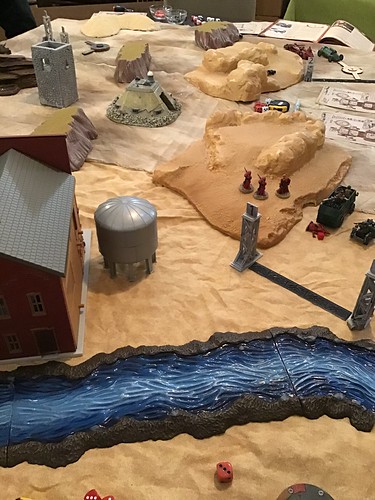 This may seem odd since I’ve been posting about this game for about a year, but this is my actual first time taking it out for a spin, with built up models, terrain, and actual humans (or semblance thereof) playing the game with me.  The visuals were great, but I was expecting that.  Mad Maximilian 1934 has a great visual aesthetic– very dashing and diesel punky.  I wasn’t too worried about the appeal.  The thing is it has to be easy to play.. and for me it was initially a bit of a chore, flipping back and forth and finding things buried deep in text.  Right now, I give it a solid:

Why a B plus?*  I think the rulebook needs reorganizing.  Things don’t flow together well.  Key ideas are buried deep in chatty, wordy paragraphs.  There’s almost no “fluff” explaining the setting at all.  This rule set badly needs some summary style organization.  I  think I’ll create a two page cheat sheet to run this game with at Fall IN, and special rules for everything that’s come up that doesn’t have anything written down yet, like airplanes, harpoons, and dynamite.

Thanks to every Scrummer who showed up  to help take this game through its paces.

Here’s an album of every picture I took.

*Follow up: Ara Harwood runs the FB group for Max 34.  When I posted this blog post on the FB group, he posted a link for a Mad Maximilian Quick Reference Chart.  I really think this will help move the game along.  For this action, I am revising the grade for Mad Maximilian to: