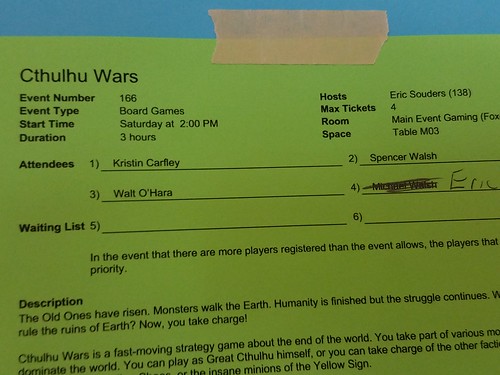 So I went to 1d4con last weekend, and I’m glad I did.  The convention is setup very differently from the HMGS conventions that I like to go to, and that is a point in their favor.  For one thing, 1D4con hosts very few miniatures games– and by that I mean games that use PRIMARILY miniatures as the medium.  So I signed up for two miniatures-using boardgames (Cthulhu Wars, OGRE) and gave it a try.

Sandy Peterson, if you know your geek history, was one of the early luminaries at Chaosium Games and primarily a creator of roleplaying games.  Call of Cthulhu, Glorantha, and to a smaller extent, Runequest, all benefited from his association.  It is for Call of Cthulhu and it’s many editions and expansions that he is best known.

Some time ago (2013 I believe) Peterson launched a kickstarter for Cthulhu Wars, his own  global domination, RISK-like game involving a world being overrun by the Elder Gods of the Cthulhu Mythos of H.P. Lovecraft.  I was certainly interested but the price point is.. erm..  a little high, even in today’s secondary market.  Being a fans of things Lovecraftian and board gaming, I was certainly intrigued and interested, up to a point.

As you can see, the miniatures that come with the game represent an Elder God, of the famous Lovecraftian pantheon– each bright primary or secondary color represents a faction of the god here on Earth. The goal of the game is to win on victory points, which is counted on a giant track. You get victory points for doing various things–summoning and controlling portals, which can only be done by your cultists (the vaguely human figures), summoning your major god, etc, etc.

You play Great Cthulhu (green), Nyralothep (blue), Shub-Niggaurath (red), and a combination of the King in Yellow and Hastur (yellow, of course). When you first start the game, you are inhabiting certain spaces with a gate (the round cardboard tokens) and your cultists. Each turn you count your power (from controlling gates and performing rituals), and with that power you conduct actions, which usually involve summoning new creatures, moving them, conquering new land, and fighting other factions.

width=
It was my first time and I was fortunate to be up against a rather brainy 14 year old kid  named Spencer playing the Yellow Sign (Hastur) and a total Cthulhu Wars shark (Eric) playing the Shub-Niggaurath faction.  I suspect Nyrolethep and I were about on the same level.  In any event, the game went briskly– I moved out very aggressively and established gates in the South Pacific, Indian and North Pacific very rapidly, as well as Australia.  I arrived at something of a rapprochement with Kristen the blue Crawling Chaos player and avoided her mostly land based movement in my area.

I realized I had broken a cardinal rule of gaming.. never go up against the brainy kid, the universe will stack itself against you. Spencer moved into Australia and captured my gate there, but I forced his retreat by bringing Cthulhu himself to the party. Sadly for his forces, I controlled the seas around Australia and wiped out a lot of his retreating forces. The Great Australian war between Cthulhu and Hastur left us both a little spread out and vulnerable, and in the subsequent turn Eric moved out and wiped out two of my sea based gates, granting him easy victory. 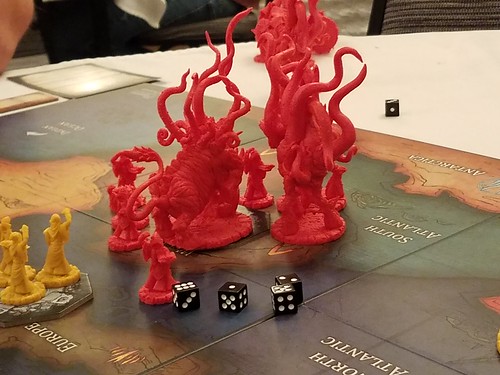 The Ashes of victory weren’t that big of a deal, and I really enjoyed the game.

How does it play?

I think Sandy Peterson has captured a certain something with this design. It’s very stylish looking– abstract, densely placed land areas that are very conventional looking, akin to a RISK or AXIS and ALLIES board.. and here you have these huge, intricate and very well sculpted plastic pieces on top of them. The components are top notch but they really contribute to a high retail price as well. They look fantastic! They also contribute to a very crowded, claustrophobic map design where you constantly have to be absolutely positive which playing area your pieces are actually in. Most of them are much too large to fit in smaller geographic locations. 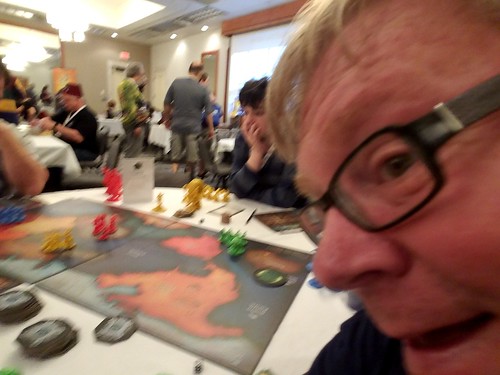 Mechanics-wise, this isn’t a game to give anyone any wrinkles contemplating strategy. It’s a slow builder game, but once you have strength built up it’s hard to stop the leader. That leads to some weird balancing rules for factions eliminated from the game (as Spencer was eventually). Eliminated players come back with half the points of the leading player. Although there are some standard rules for building up and actions taken every turn, each faction breaks these rules in some fashion. My first impression was that the factions seem unbalanced, but then again, we eventually elminated a powerful early player that I thought overpowered me by a country mile, so it’s mostly in the play of the thing.

Overall, I enjoyed this game very much. I will probably not buy it because it’s a very niche taste game and I would have a hard time getting it on the table. I love the components but that has led to a very high after market value and I don’t buy games just for components any more. Great design, though, and hugely entertaining.

I will follow up with a post on the convention itself, which I have been a slacker reporting on.