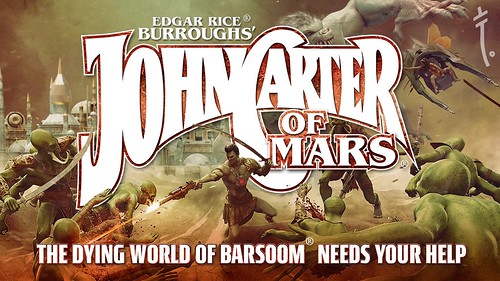 Modiphius Entertainment is a company I don’t know much about, to be honest.  After a little research I’ve discovered they were behind the successful Age of Conan kickstarter that I kick myself for not being part of.  I guess I’m not a boardgame hipster these days, I’m out of the loop!   They are also behind a series of recent reprises of the Mutant Chronicles, Fallout, and Star Trek boardgame licenses as well as a distinct Conan RPG line.  These accomplishments may mean little to you if you aren’t a fanboy of these franchises, but I have nothin’ but respect for managing to snare so many great intellectual property licenses for boardgame conversions.  Bravo, Modiphius.  The best part? Even if you have no intention of playing the boardgames, if you like skirmish games each game comes chock full of heroic scale miniatures.  Not bad.

Which brings me to.. JOHN CARTER.  Now, if you’re a regular reader you probably already know I’m a big fan of things Barsoomian.   As my big cheerleading review of the 2012 movie indicates, I was on board for seeing Edgar Rice Burroughs on the silver screen.  I’d totally love playing miniatures games in the Barsoomian universe.  Which is fortunate, since the new John Carter Kickstarter from Modiphius is going to inundate us with what is clearly John Carter (movie) inspired minis.  This kickstarter is being presented as a roleplaying game– not a boardgame with vignettes like Conan or a skirmish game like Mutant Citadel.  That might be appropriate– I could see it as a small scale skirmish game OR a big mass troops miniature wargame on a grand tactical scale (but probably at 15mm or smaller).  It’s been done before. 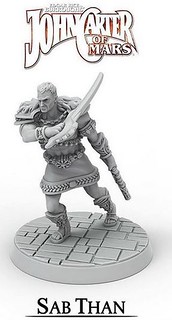 The miniatures displayed all appear to be strongly influenced by the 2012 movie, and I suspect the deal Modiphius made was with Disney, not the Burroughs estate. Certainly many of the figures look very close to the movie cast with some exceptions. I have no real issue with this; with the glaring exception of the leading man, I had no problems with the Disney movie visuals. They will look spectacular on a table, all painted up. Right now, like a lot of kickstarters that display primarily 3D renderings as the art, it’s hard to get a feel for what these figures are going to be like. There’s a lot of them, to be sure. I hope this series takes off and they introduce the many species from the books that aren’t represented here, like the Yellow Men of Mars, the Thurns, and the Chessmen.

I love the idea of this, love the sculpts (and don’t lecture me that they aren’t canonical, okay?  I don’t WANT to play with nude Barsoomians, alright?).  Like a lot of headlong jumps into Kickstarter land, I’ve learned to be cautious about committing this much cash up front..  So I may end up being an enthusiastic cheerleader from the sides, cheering on the guy who actually bought all this stuff and playing games when he or she runs it, yeah, that’s the ticket.

I have too many projects already, dammit.  Keep saying that…