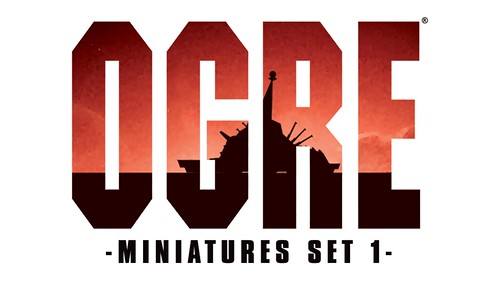 As you may or may NOT know, I’ve been an enthusiastic backer of the OGRE miniatures project by Steve Jackson Games in the last year. The Kickstarter project funded almost immediately and when they made Backerkit offers, I increased the number of miniatures and bought two more basic sets above and beyond the two sets I started with (one all red, the other all blue, the backerkits green).

A bit of background. OGRE Miniatures have been around for a while in different forms. If I’m remembering things rightly, the defunct MARTIAN METALS may have made some original OGRE Miniatures. I remember seeing a few blisters here and there in shops, and adds for more, but these may have vanished from mortal ken now– even the lost miniatures wiki doesn’t have pictures of them. Well, if you’re an old guy like me you know Martian Metals went defunct long ago and that was a sadness– I liked their attitude, their sculpting was at least, ahem, enthusiastic, and they were very tied in with microgame publishers like Metagaming, which was unique. Sigh. All gone now!

OGRE miniatures didn’t come around for a second chance until the actual OGRE Miniatures game and accompanying (metal) miniatures in 1992. This was the old OGRE scenario without the hex map, and along with the rules, SJG themselves licensed out the production of many packs of OGRE miniatures, both Paneuropean and Combine, over the next ten years. You can still find these here and there on the Internet. They started at 19.95 new but now are going for a princely sum. SJG muddied the waters a little by releasing DELUXE OGRE and DELUXE GEV, sometime in the late 90s, which were essentially magnum sized versions of the old microgames, done with the same metal miniatures from OGRE Miniatures. I own the DELUXE OGRE set myself, but actually (ahem) never painted it. Now I wish I had!

Demand is a fickle mistress and all good miniatures lines have their day in the sun, then they kind of fade away. So it was for OGRE miniatures. SJG ceased production of the line back in the oughts, and that, we thought, was that. Until the Kickstarter for giant-ass OGRE showed up, that is. Suddenly, Steve Jackson Games was flooded with cash as hundreds of people pledged to pay 100 dollars for what was once a 2.95 microgame! Tier after tier after tier was reached and just what the heck extra could you give these people? Who KNEW there this many OGRE fans left alive? So Steve started looking back at this ancient chestnut (designed in 1977) and started coming up with ideas about how to ride that OGRE wave again. OGRE miniatures was obvious (along with a modernization of the ancient PC game, see last week’s post), but who wants to have a warehouse full of metal? SJG had tried that in the past. It didn’t work out. Instead, why not try plastics? Thus the OGRE Miniatures Set 1 kickstarter (mentioned above) was born, funded and over-funded. Interest with modern customers seems as intense now as it was back in the 90s. There is one problem, though. Set One is comprised of only all the units from the original OGRE game– Infantry, GEVs, Missile Tanks, Howitzers, Heavy Tanks and an OGRE MK III. There were several new units introduced in GEV, and further expansions in SHOCKWAVE. So there’s plenty of demand to fuel this train yet.

Today, the Kickstarter update posted a series of tantalizing pictures that indicate that work on SET 2 is already commenced and the first rough prototypes have been produced (in many colors, don’t pay attention to that quite yet). 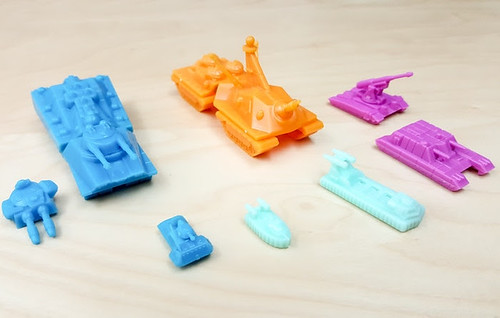 Wide shot. As you can see, there’s a GEV PC, what looks to be an OGRE III, a light tank, a SuperHeavy tank, a light GEV and a mobile howitzer pictured here.

I’m not sure what will be included in Wave 2 yet, but it looks like it will emulate the units in GEV, on a guess. That works for me. GEV increases the tactical choices in OGRE exponentially, and gives us new terrain to play in. 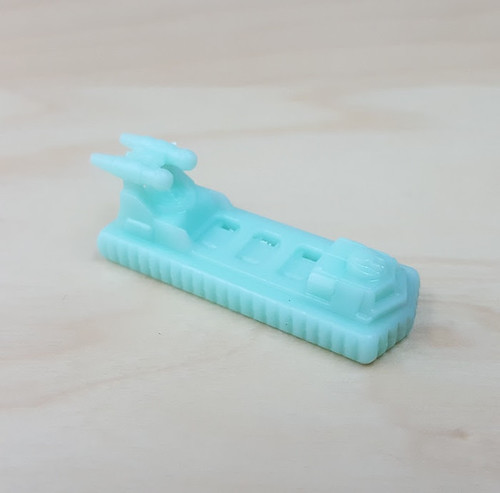 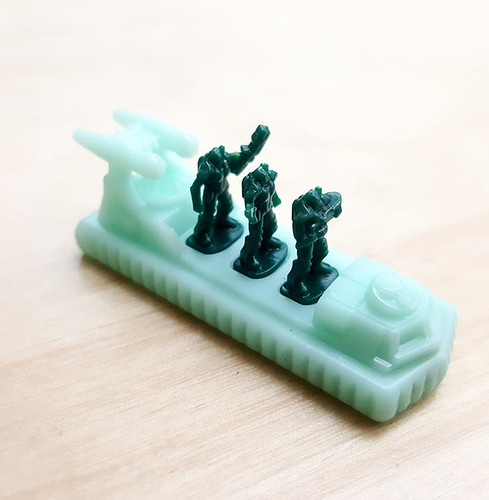 GEV PC with INF stands in it. 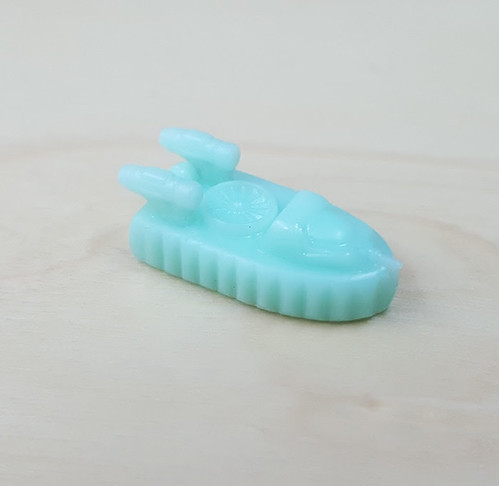 Light GEV. A bargain, you could get two for the price of one and it moves like a GEV. 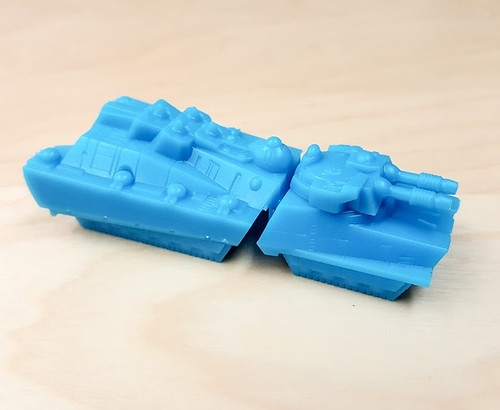 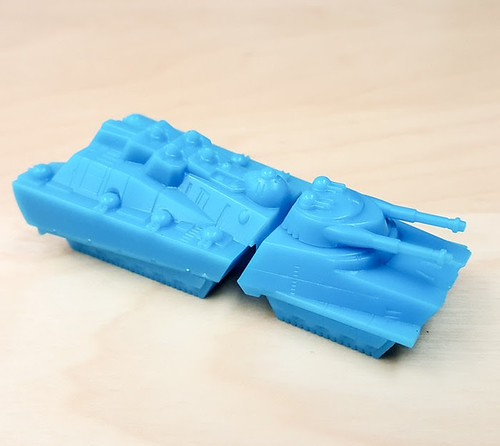 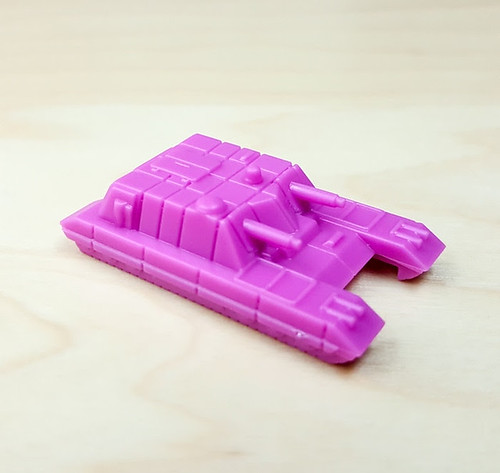 Superheavy Tank. If memory serves this is a SHOCKWAVE unit, so perhaps there will be a mix of unit releases going forward? 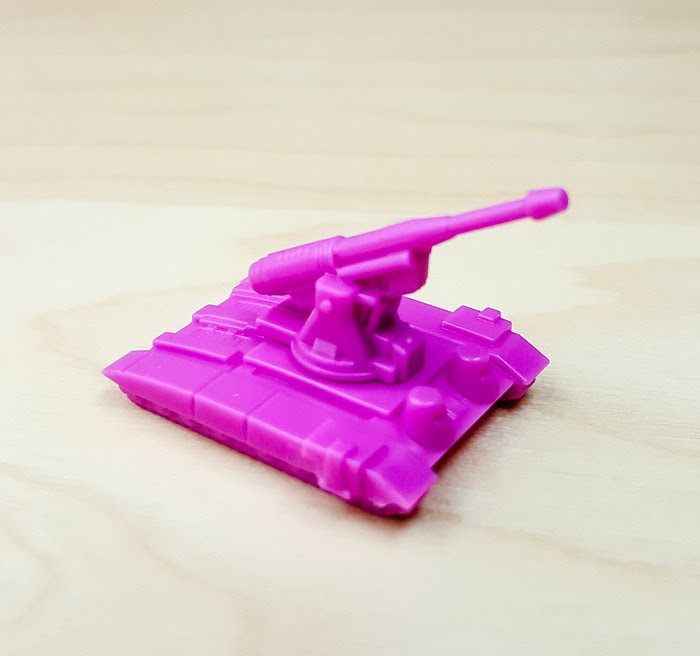 Mobile Howitzer. I remember them looking a little different… 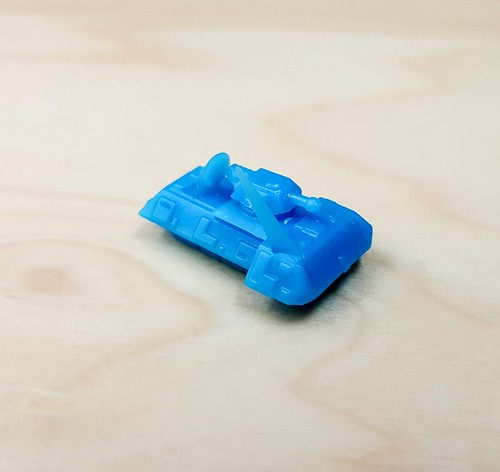 Light tank, introduced in the GEV game. This looks pretty close to the original sculpt.

So that is what has been released in today’s press release.  Keep in mind this is an early look and not remotely production model quality– production figures won’t be released in pastel and neon colored plastics, either.  There are some odd compromises here and there– I don’t care for the infantry figures quite yet, the light GEV has very little detail, and the Mobile Howitzer just looks, i don’t know, odd.  With that said, I’m encouraged because they’re putting out a FENCER for sure, and maybe even another variant OGRE other than the III and V.  Who knows?