And Thursday brought us a return of a camp favorite, BIG DANGED BOATS.  This is a 15mm Fantasy Naval game of my own devising, and it has some weird elements, such as a foot of a dead God, and Steam Powered Cheese, and The Followers of Joe.  We had some delay setting up (remember, the kids wanted Frostgrave to go long so we had to postpone BDB for a day?  Well, it takes a while to set up, being kind of a labor intensive game to run.  Not to worry, though– they played Room 25 (by themselves! Twice!) while Garrett and I speedily set up BDB for a shorter scenario.   We got in a good amount of play but were no where NEAR resolution by 3PM.  All the campers but one were asking for an extension of BDB.  Okay, I get it.  One thing ten years of running this camp has taught me, is to be flexible.  So we are continuing over into Friday, cancelling the Playtest of BOOM! Zap! and running Viking Looters a few times in the afternoon.  Oh yes, and ice cream, and door prizes!  Osprey and HMGS both helped out in their own ways.  So we have some very good boodle to hand out tomorrow.

So, BDB.  I set up a pretty small scale scenario.  The Ratlings in the Steam Powered Armor Plated cheese, the Primus, versus human elitists from Stahlheim who are seeking the secret of Boom Powder, versus the Bone Brigade in two ships (black Galley and Deadnought) and the Gnomes of Batenburg, in the gigantic Gnomish Siege Machine.  Add to that the Seng passing through willing to see Boom Powder to anyone with gold to buy it.  I ran the Seng and the shore batteries. 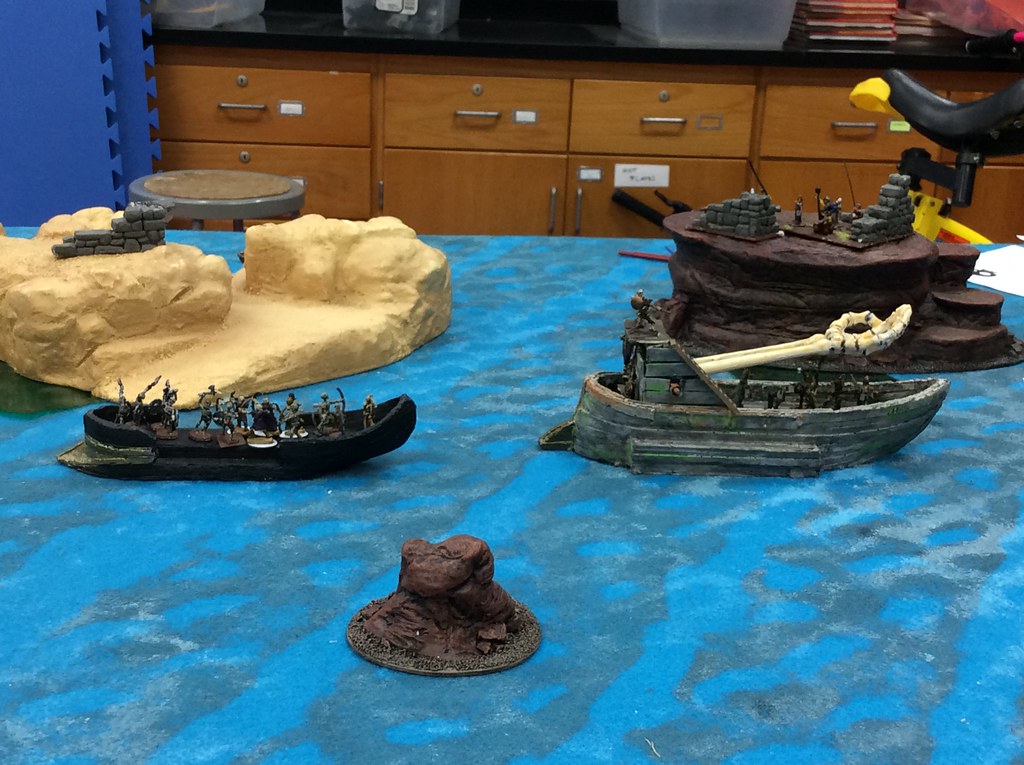 One thing I notice about modern youth is a general hesitancy to create a plan of attack in a game, be it Frostgrave, War Rocket or BDB. It’s as if they dont’ want to get stuck in it with someone they can’t beat or something. Fortunately, I had a youngster who set his Gnomish cap on taking out Stahlheim and charged in trying to ram his ship into submission with the Siege Machine’s Big Bopper Ramming extension. Stahlheim was in the middle of a complex negotiation for the outpost’s mortar (which the Stahlheim captain sneered at, citing poor workmanship. They looked up and suddenly saw the looming bulk of the Siege Machine bearing down on them. Fortunately, the ram sheared off and the Gauntlet retaliated by blasting them with two forward facing Medium cannon. 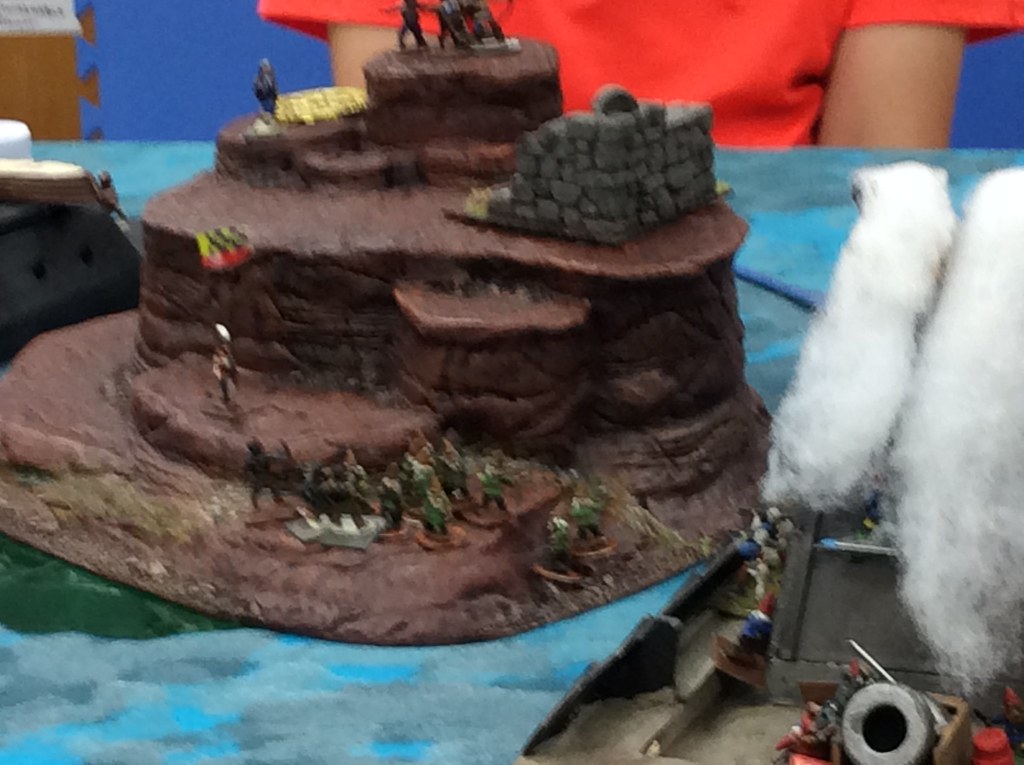 Right when I thought there would be some proper bloodlust they desisted and made a deal.  Meanwhile, the Bone Brigade traded with the Seng, who were more than happy to take their gold from them.  The Bonies turned on the Gnomes in the long distance, shelling them with the Plague Package. 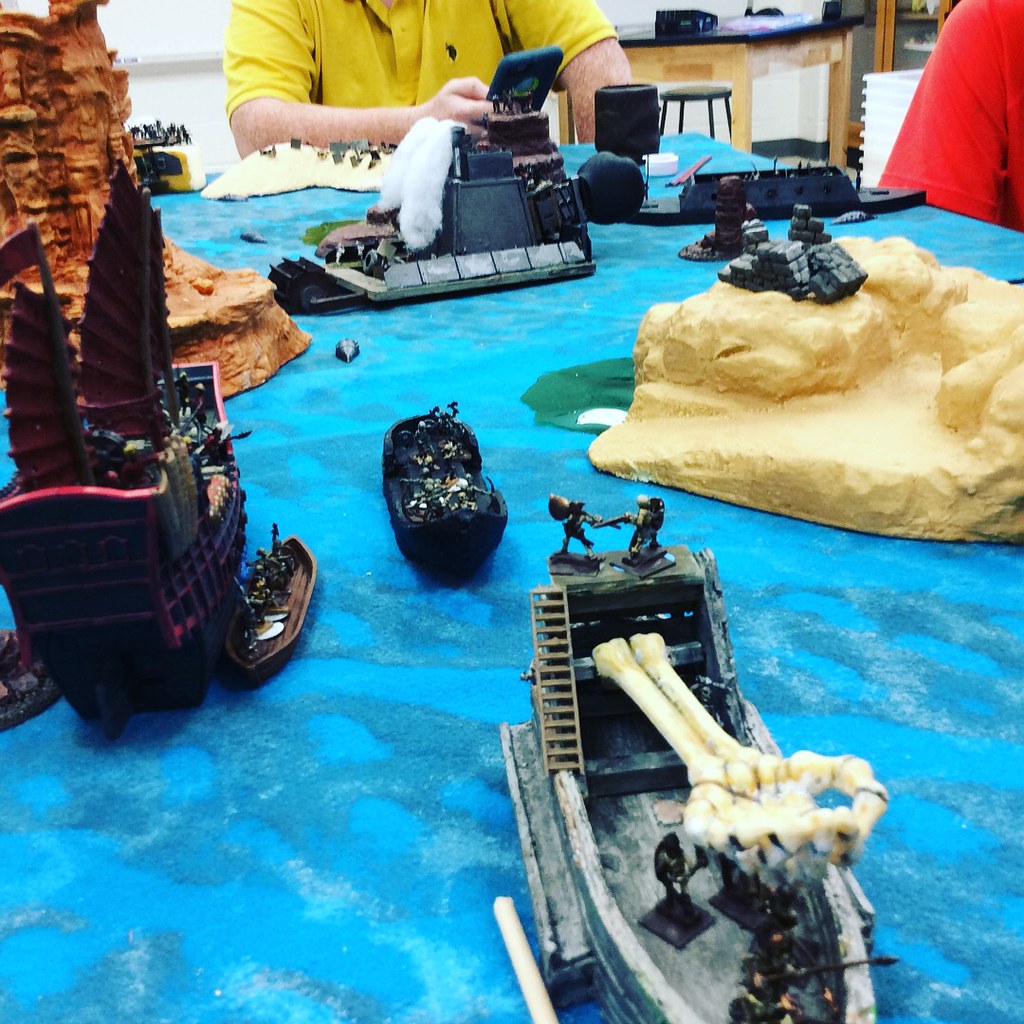 Firing a plague package at the Gnomes.

During the game the Rats of Ingoldsby Island didn’t do much. The Primus promptly broke down and they spent many turns wrenching on it. Then they sailed over to a bored guard captain and got him to shell Batenburg for a gold Piece. I do insist the players try to roleplay their parts.. that’s part of the fun. Garrett did a great job playing the lisping, amoral Rat King.

Stahlheim sailed around the guard rock and brought the Batenburgers back into view, letting a fusillade of cannon shot strike the Siege Tower. So much for peace! 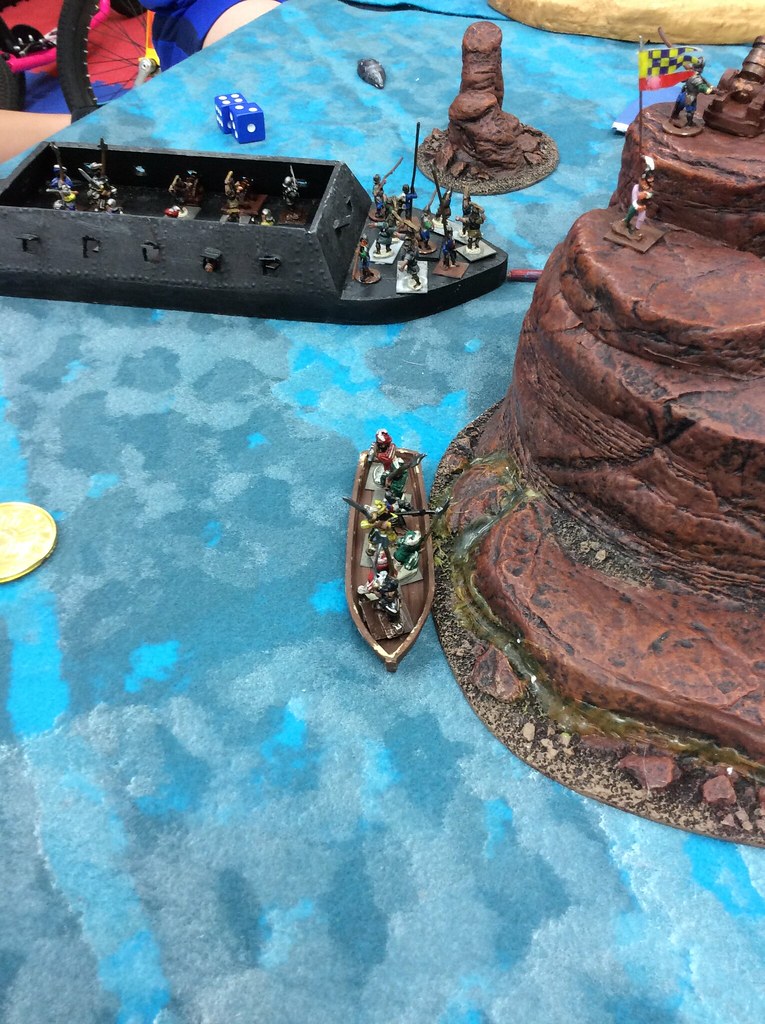 The Gauntlet– probably the best defended ship on the Middle Sea

Right about then we broke for the day as we had lost some time setting up. As promised, we will run BDB in the morning tomorrow, axe BOOM Zap! and do Viking Looters and ice cream in the evening.

A good session!  The kids liked BDB.. a lot.  It is something of a spectacle.  We tried some innovations.  There are new ships: The Followers of Joe (not on the table),the Cat’s Claw (brought but not selected, much to Garrett’s displeasure), the Whaling Syndicate (A group going out to hunt the Tentacle Kraken beasts).   Nobody wanted the new guys– and of course the old standbys did get selected.  I designed a trading system so that players could do something else besides kill each other, but that’s really only going to work if we have about 8 players, so didn’t want to confuse the kids and worse, slow down the game.  I did renovate a few key mechanics.  First, steam power– instead of running that complicated throttle mechanism– which seemed great but just confused people, I now make steam powered ships roll for breakdown each turn at differing threshold numbers.  Then they roll on the Wrenching Table to build back distance and speed.  It’s simple but it works.  I redid the ship sheets to something smaller and less complex.  The damage track is streamlined to H, H/C, H/G and H/R (Hull, Hull plus Crew, Hull plus Gun, and Hull roll for it–which has some critical results).  It definitely plays faster.   The players also suggested a plague load for the undead ship’s catapult.. so they can fire plague on the target boats.  Great idea!  So we added it on the spot.