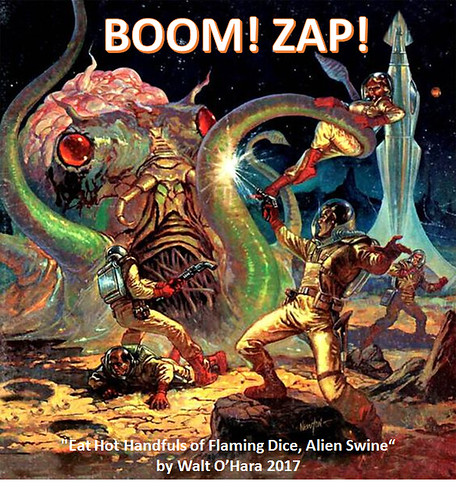 I’ve been looking for a very light set of rules for running a sort of “Space Port Bar” or “Cantina” game akin to the Blood and Plunder Tavern brawls but in a pulpier era for a while now, at least 2009. I’ve tried a few out but have been disappointed with a lot of them.  What you see here is a very, very high end look at the subject as I’m finding “Pulp” to be a much broader subject than people give it credit for. Do we mean Flash Gordon and Emperor Ming? Crash Corrigan and the Undersea Empire? Buck Rogers and Killer Kane? Do we mean John Carter and Planetary Romance? Do we mean the Skylark of Space? Do we mean the Rocket Man? Commander Cody? There’s a lot of subgenres that are evident, and ONE set of rules just might not cut it. So in an attempt to make a one size fits all approach to a very broad picture, I’m starting with a decent set of Western Skirmish rules, the old RULES WITH NO NAME that appeared in an old MWAN magazine way back in the day. This version has been Science Fictioned up a bit, and I’ve added a very broad brush attempt at Gunfire, Melee, Robots, Rocket Packs and Aliens. There’s so much I can do with this idea, don’t even think this is the final.. I’m adding to it as we go, consider this 1.0. I need to add explosions, malfunctions, space ships, beserk robots, planetary romance, more swordplay, anti-grav travel, and a host of other appropriate topics. This will be enough to get me started in a low key way.

If you want to get in touch with me with suggestions or questions, try me at misternizz@gmail.com

In the meantime, you can download BOOM! ZAP! here.