This is an AAR of Thursday night’s game of Frostgrave, at HISTORICON 2017, put on by the masterful GM: Jeffrey Hiley.  “Masterful” is faint praise for Mr. Hiley’s terrain building skills, which put the rest of us pikers to shame.  Case in point, his Frostgrave city, an expanse upon which I have gamed in the past, sans the harbor area: 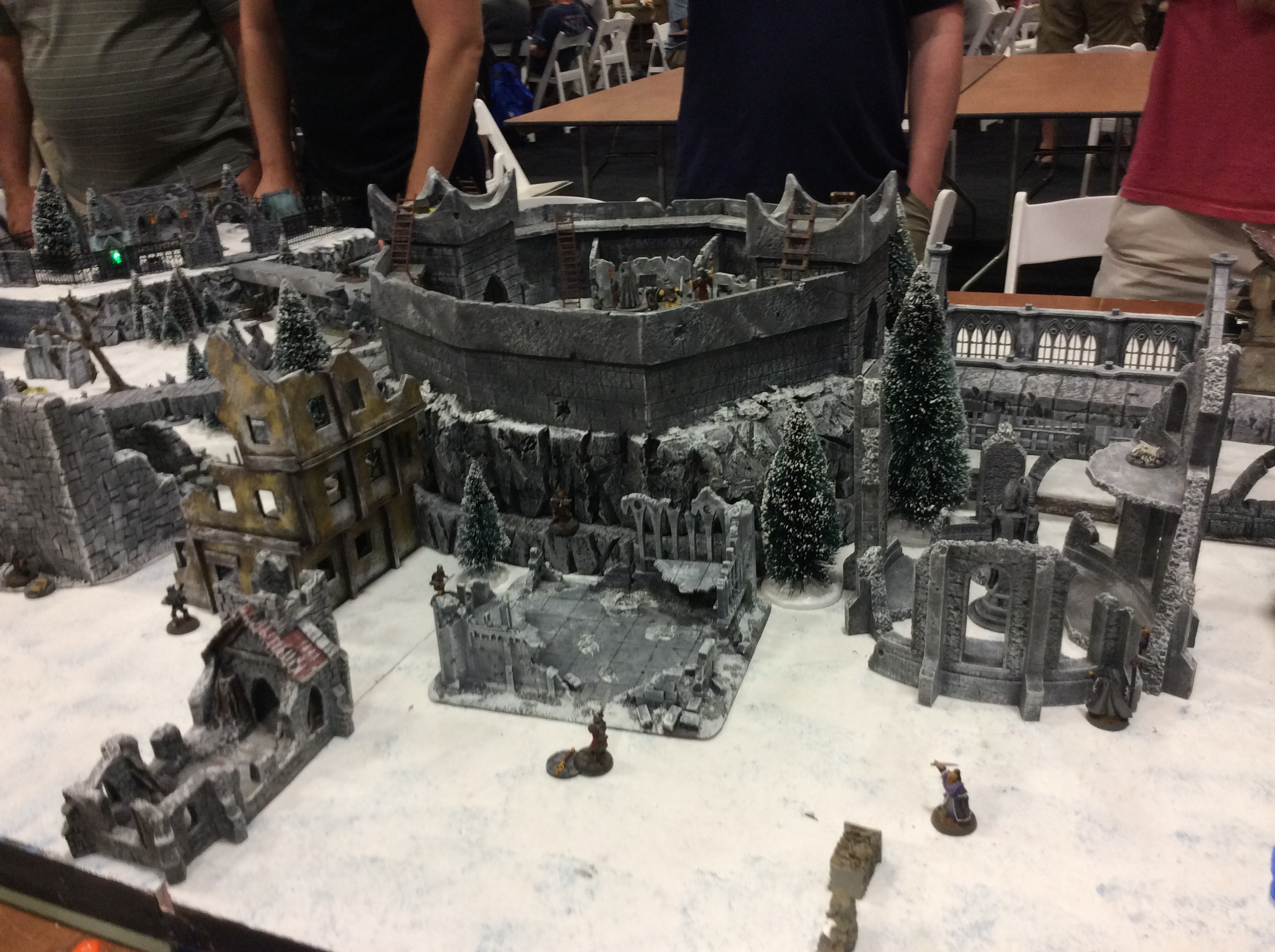 Add to this a new feature, a frozen harbor full of ships, a longish quay that had clear shooting from end to end and lots of open lines of sight everywhere, and you have some beautiful terrain that could make for some really tense moments in Frostgrave. 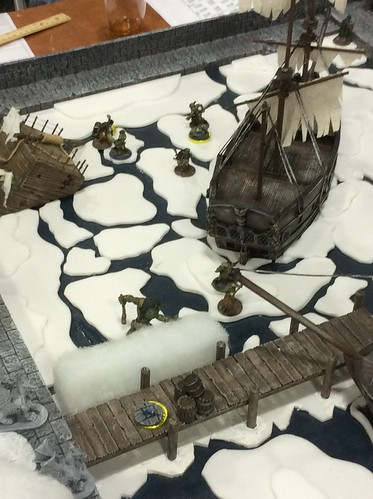 Frostgrave, Treasure Hunting in the Frozen City!. GM: Jeffrey Hiley. Fantasy. 28mm. Rules: Frostgrave. Amidst the frozen ruins of the ancient city Frostgrave, wizards battle in the hopes of discovering the lost magics and treasures of a fallen empire. Each player will take the role of a wizard from one of the 10 schools of magic.
Leading an apprentice and hired soldiers into Frostgrave you will compete with other wizards also trying to find lost secrets. Play on custom made, award winning terrain. Kids 12 and under welcome, accompanied by an adult.
Rules taught, beginners welcome. 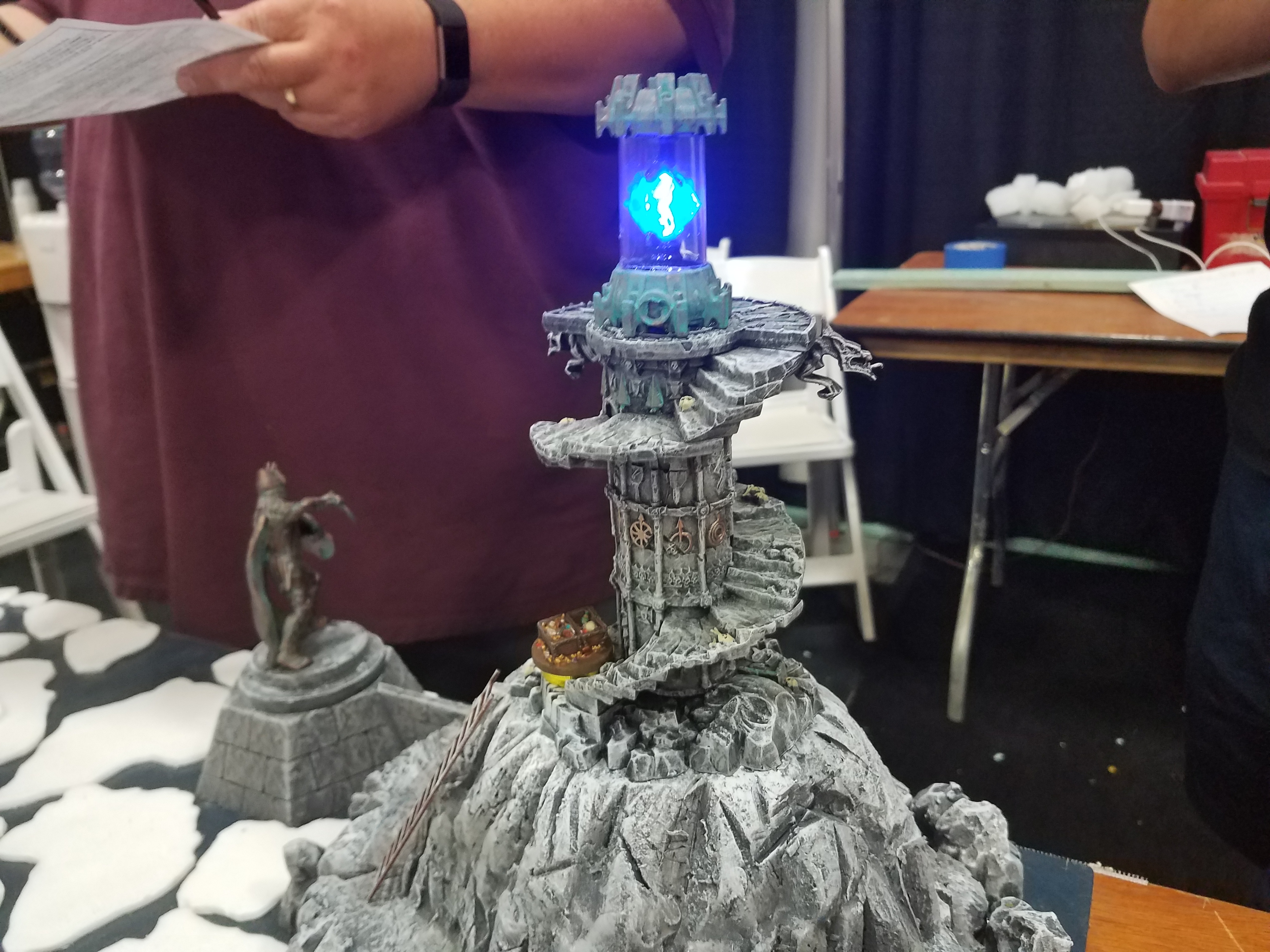 The Lighthouse in the Frozen Harbor.

The scenario for Treasure Hunting in the Big City sets up two teams, good and evil.   On the good side were four warbands, led by a Chronomancer, an Elementalist, a Thaumaturgist, and a Witch.  On the evil side were also four warbands each led by a Chronomancer, an Elementalist, a Witch, and a Necromancer.  The sides were very reasonably balanced.   I got the Good Chronomancer.  The GM wisely handed out pre-made warbands with pre selected spells.  This is smart– for a couple of reasons.  First, creating a Frostgrave character takes some thought and takes some time– you have to think about the kind of character you want to play and how you want to play him or her.  Offensive? Defensive?  A character that can take care of himself or others?  Or someone who can throw out fireballs with gay abandon?  Secondly, those crew rosters and figuring out point costs may be easy math, but it also eats up loads of time.  So for a convention, certainly, pre-made rosters are the way to go with Frostgrave. 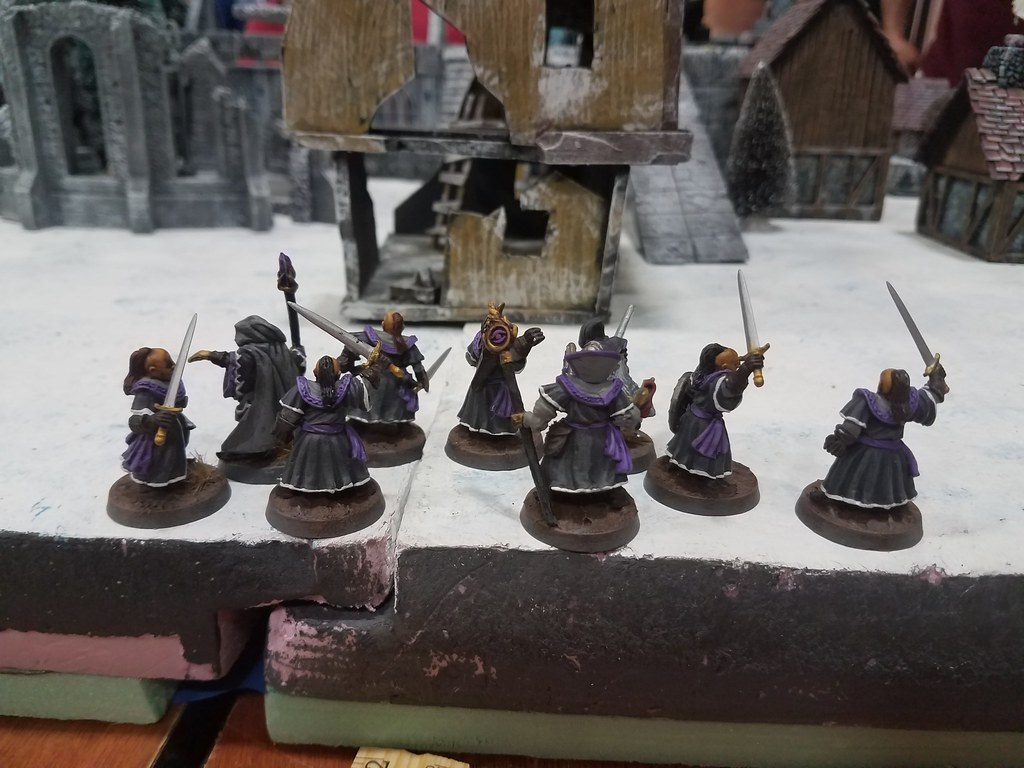 My Chronomancer and his hired goons step out smartly.

My Spells were: Crumble, Fleet Feet, Decay, Elemental Bolt, Spell Eater, Mind Control, Push and Leap.   This is a good selection, for a Chronomancer.  I would probably select something similar.  The only downside is a Chronomancer’s ability to reach out and impact other groups is pretty limited.  On the other hand, the ability for a Chronomancer to influence matter is pretty good.  Crumble can bring down walls, it can make holes appear under people’s feet.  Decay can make weapons crumble into dust.  Fleet Feet is a passive bonus but it does have a benefit of extra movement for either the Chronomancer or his goons.  The other spells are mostly set up to move other things or other people distances– which helps getting treasure off the map! 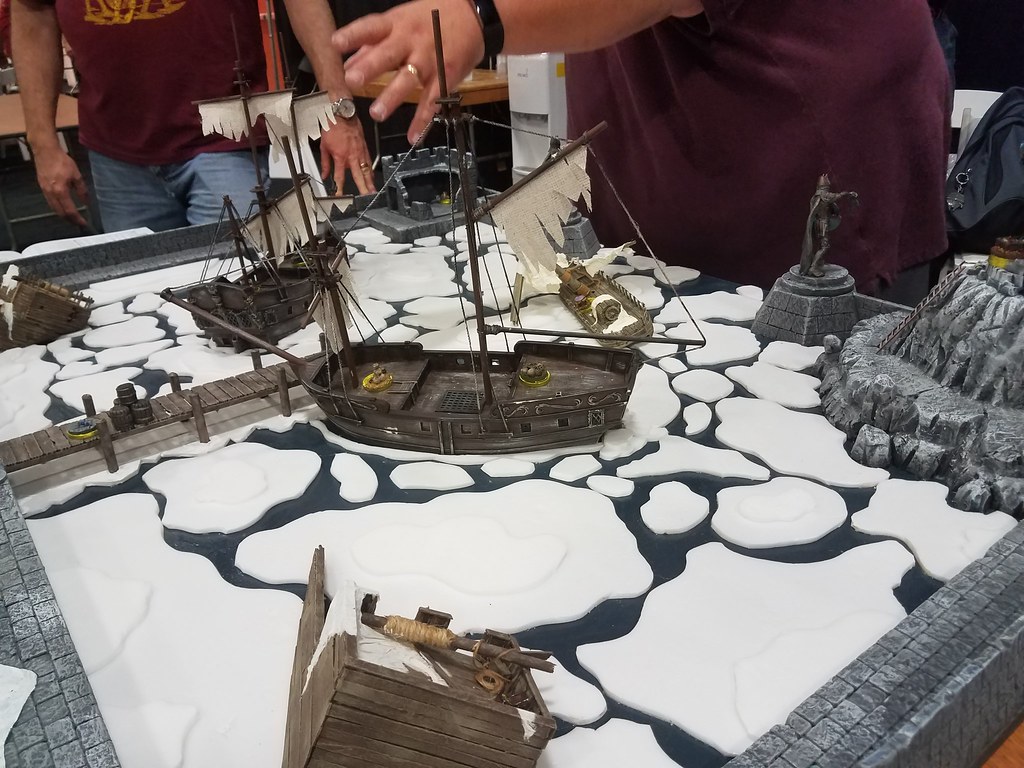 Not much in the way of cover out there on the ice floes.  Great treasures, though!

If you know aught about Frostgrave, you’ll know it’s about looting, first and foremost.  The Wizards enter the frozen city, each with a specially picked team of hirelings, and they exit with as much treasure as they can carry.  In Jeff’s game there were treasure tokens all about.  Some were worth more than others– if the treasure token had a gold coin under it, then the treasure was one that implies greater risk, and thus with a greater value (of 10 VP per treasure).   Our four teams on the good side were set up with two teams on my left and one on my right. 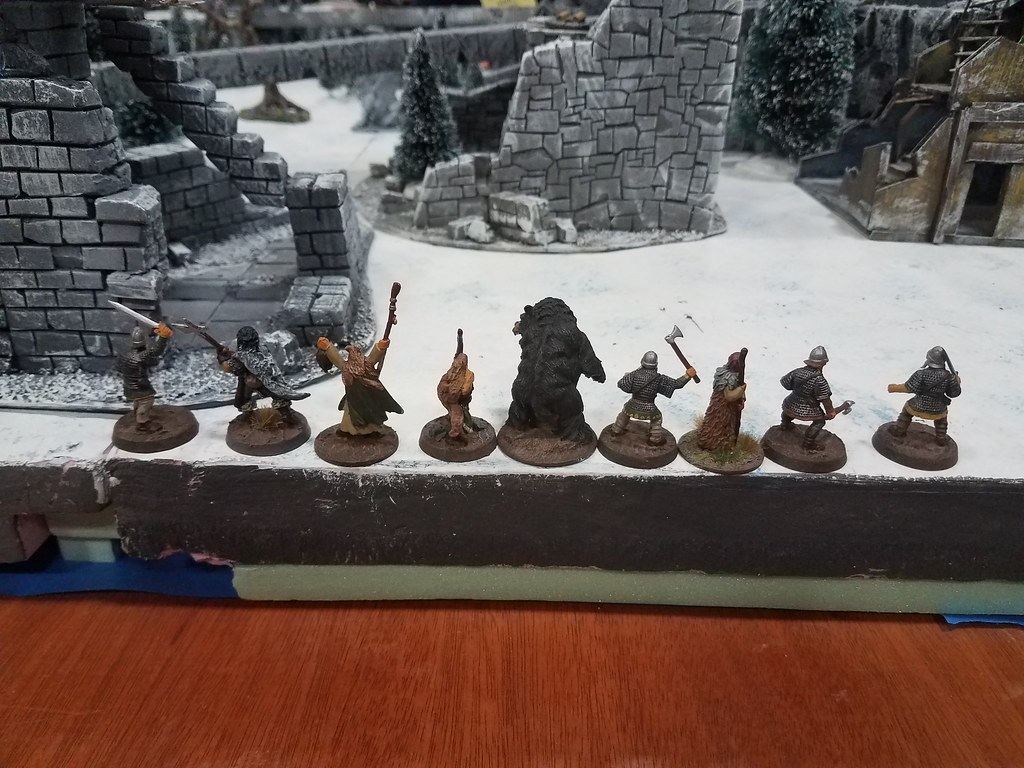 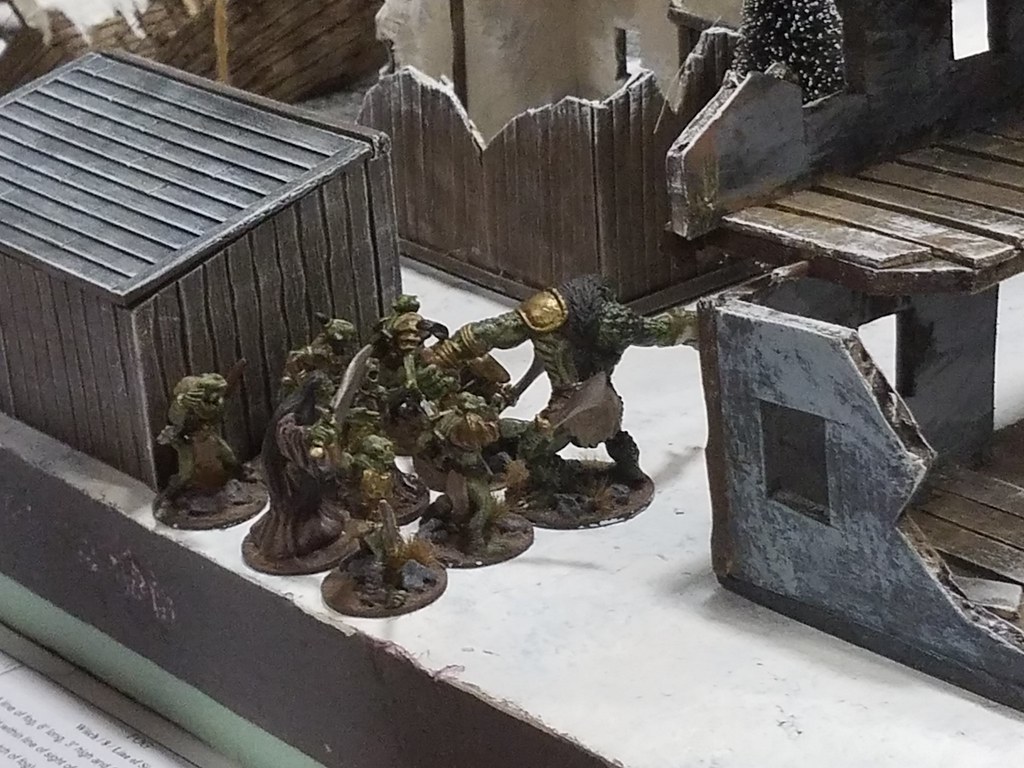 Good witch team on my left with giant bear companion (Top). This was mirrored by the evil witch across the table with Troll mirroring Bear for the evil side (Bottom).

My starting position was more or less just a tiny bit right of center.  I was in an area of smaller medieval town buildings, next to a ramp going up to the big causeway that goes up to the big round castle.  Except for the causeway, I had clear control of a high ground with plenty of cover– the third floor of a crumbling townhouse.  Not exactly controlling the right side of the board or anything but offering up good opportunities if my opponents get careless.  I had a lot of good line of sight spells– crumble, push, decay, etc, but nothing that could hurt people from a distance except Elemental Bolt, which has a high casting cost.  So I took my archer and parked my Wizard up high in the drafty crumbling top of the house with the Archer, looking for targets, and sent out my band of thugs to gather and loot with great joy. 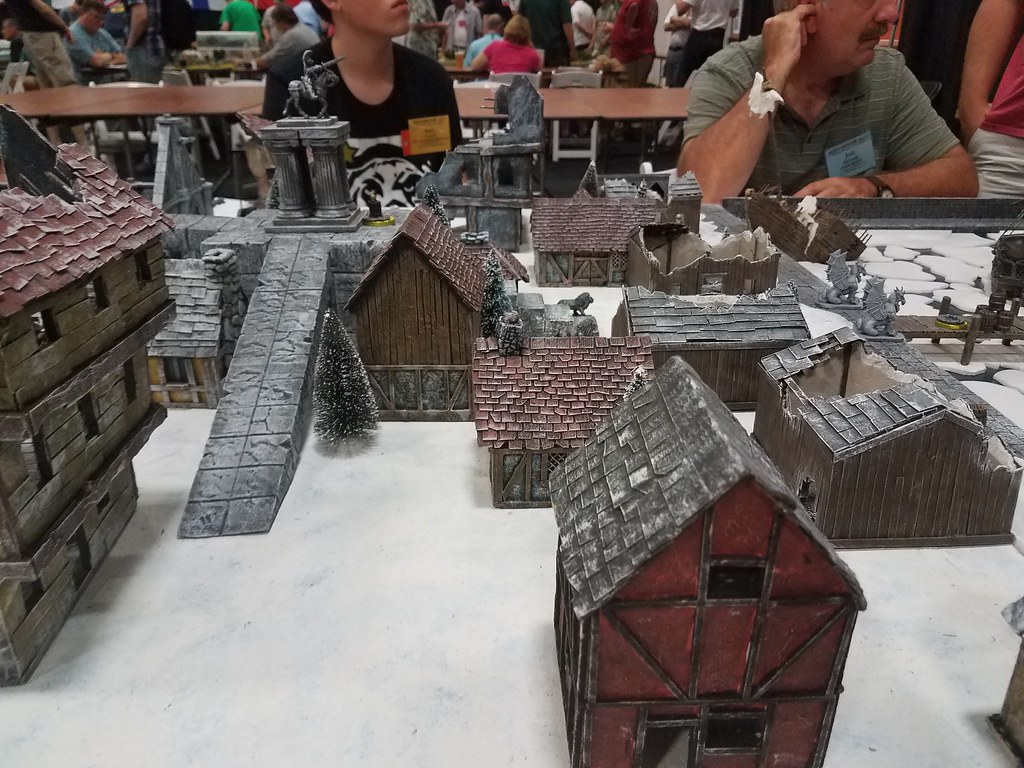 I wish I had a sexy tale of my wizard entering into duel with another wizard and slinging bolts and such but it wasn’t like that. I took a commanding presence as I said, and my thugs had a relatively easy time of it. This was due to terrain for the most part. There was a commanding archway directly in front of me which masked the movement of my band (and my wizard and apprentice) nicely. My thugs all got treasure except one. I made good use of my spells and they failed about a 1/3 of the time. Most of them were Fleet Feet to make my people move faster. I hardly ever had another wizard in my sights at any point, but did my best with missile fire and crumble offensively. I never bothered with Elemental Bolt (it’s not a favorite) but I do love Crumble– one of my favorite spells of the Chronomancer group. So I tried to drop a wall away from someone who was next to it and maybe get him to fall. He saved. Then I tried a PUSH on him and it failed. So in order to do a one-two on the bad guys, who were up in the citadel, I started crumbling giant holes in the wall to see IN to the citadel. I did cast a successful DECAY at that point, but that was pretty late in the game now. Oh, and I used MIND CONTROL at one point, which was a lucky roll at 14. I wanted to control a giant rampaging Owl Bear out on the ice floes that was menacing my Thaumaturgist ally, but Jeff plays with spell ranges, and I couldn’t nail him. As a consolation, I was allowed to Mind Control the troll and have him rampage against his former master. That was satisfying. 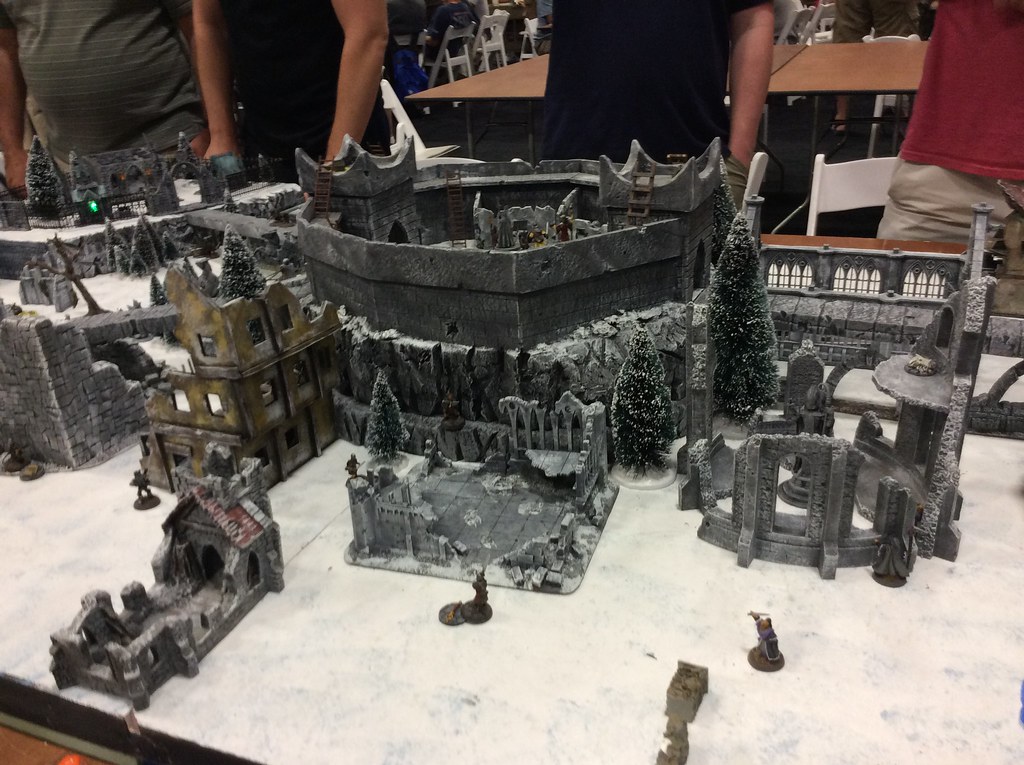 So my Wizard never really came under fire, nor did my Apprentice.  They were in position to support each other and didn’t risk themselves very much.  This in my mind is appropriate for Chronomancers– they don’t have a way of bringing a world of hurt on other people, but can make things happen.  The closest I came to taking losses was when I sent two thugs and a knight up the ramp to the causeway to grab an extra point treasure.  The knight ran across the causeway to come to grips with the enemy forces in the citadel, while my ally to the left attacked them from the rim of the citadel.  There’s something to be said for having it easy– I had a very clear hand with the loot items.  There was never much danger but the treasures were only worth ten points instead of twenty. 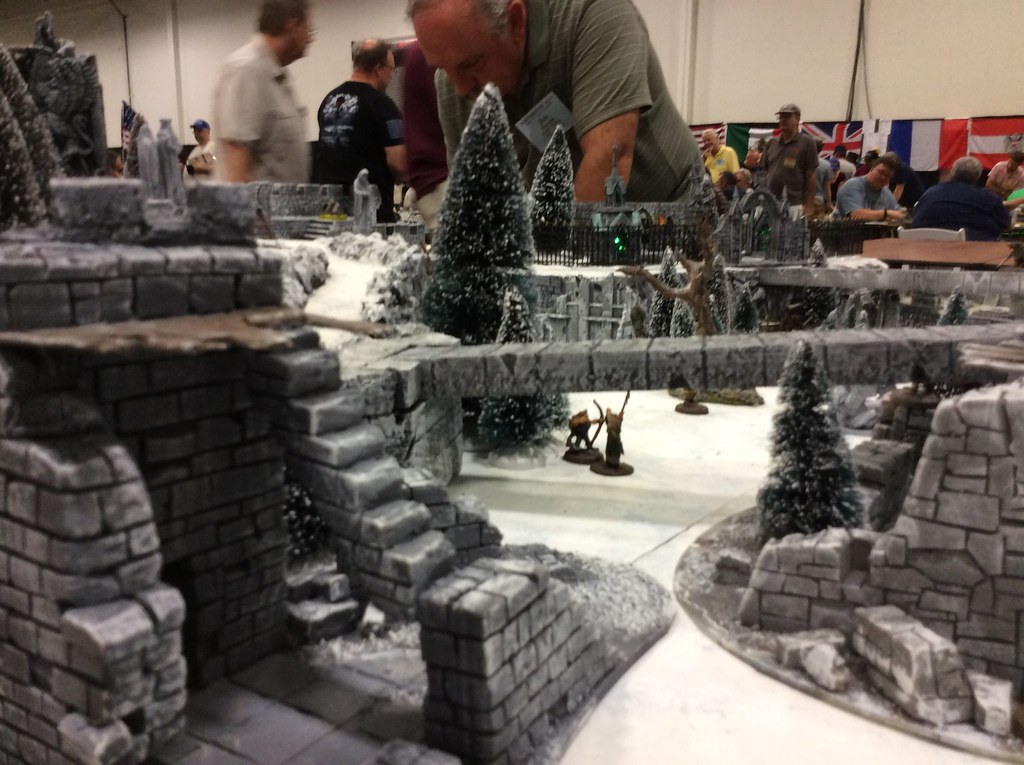 The guys to my immediate left definitely got into it more than I did. They lost an apprentice, but killed two of the enemy apprentices. That was our highest level casualty. The guy on my right (a Thaumaturgist with some good spells) had his hands full and saw the most combat of the entire game. He fought a troll from the enemy Witch team, then ran out on to the ice flows where the good treasure was and got into it a suddenly appearing arctic Owl Bear. So he took the most casualties from the Good side.

At the end of the day, we (the Good Wizards) had a large numerical edge in the Victory Point category.  This was a great event, very entertaining and clearly demonstrating the amount of work that went into prepping the terrain for the spectacle.

HERE is a slideshow of every Frostgrave snap I took.  There are a bunch of them.