This is a general After Action Report (AAR) of a game from the recent HISTORICON 2015 show last weekend called On the Seas of Tekumel. 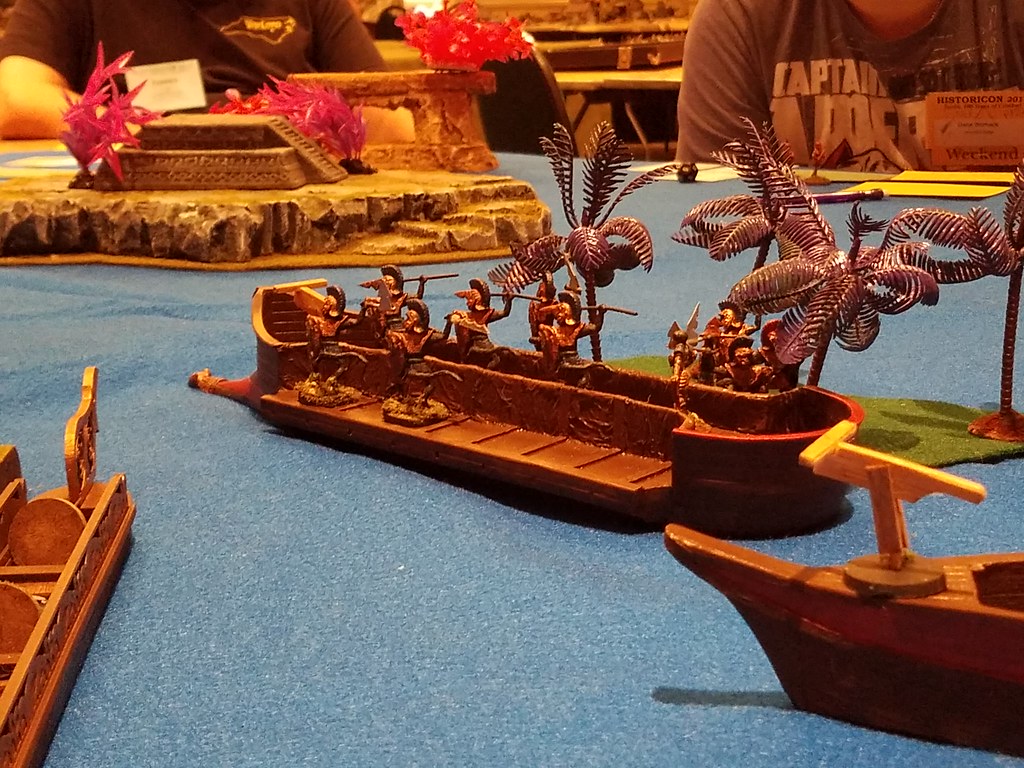 On the Seas of Tekumel. GM: Steve Braun. Fantasy. 28mm. Rules: Homebrew/Savage Tales. Tekumel is home to many non-human races and the high seas are a great place for them to meet up a settle their differences! See what happens when the insect-like Hluss bring their ancient Lightning Bringers to fight ships made of wood and iron. Join in the fun as the frog-like Hlutgru storm aboard your vessel.

Background: The Tekumel universe was created by Professor MAR Barker, back in the 1970s and possibly as early as the 1940s  (I’m not a Barker scholar, though I know a few).  VERY broadly speaking, Tekumel is a planet that has been colonized by many alien races — the humans who become the “Tsolyani” and the other alien races who have also shown up: Hlǘss, Ssú, Hokún, Mihálli, Nyaggá, Urunén, Vléshga.  Many of these are distinctly non-human in flavor, sporting six legs or radically different physiology, and certainly different philosophies.  At some point in the distant past of high science, a “Bad Thing” happened and Tekumel, its moons and other surrounding planets were transported to a pocket dimension.  As a result, there is no more contact with any of the alien’s home planets, and no more advanced technology, although many artifacts are here and there on the landscape.  Professor Barker took this setting and with the help of Gary Gygax back in the 1970s, created one of the world’s first roleplaying games, THE EMPIRE OF THE PETAL THRONE, back in the 70s.  I owned a copy, which was much thumbed through but rarely played.  D&D was always easier to grasp (although far less elegant) and my gaming buds liked their RPGs like they like their coffee, dark, bitter and easy to grasp.  Empire of the Petal throne has enjoyed a long lasting niche popularity over the years and has gone on to be republished and expanded upon by the fanbase.   There have been five novels, by Barker (I believe), I only have read two of them and found them very interesting, if a little dry. 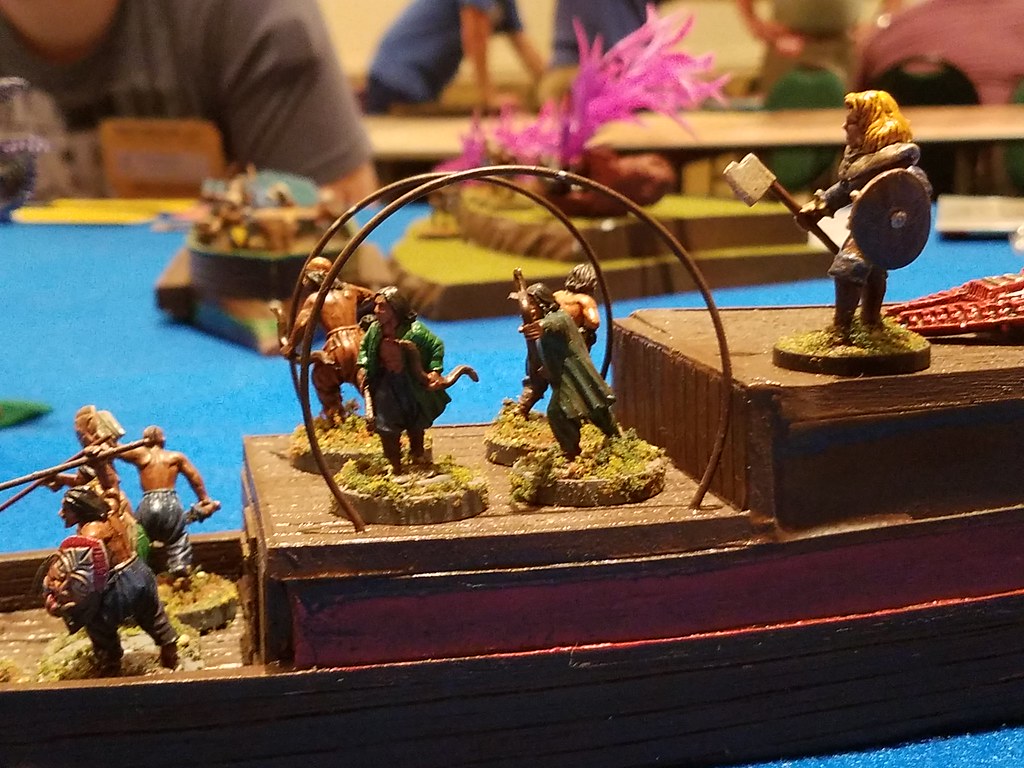 The Seas of Tekumel is a a brainchild of Steve Braun, whom I believe is a teacher in Maryland, and without a doubt a fan of Barker’s work. He adapted material present in the Petal Throne series (there’s a lot more to it now, contributed by subsequent generations) to a simple, fast playing game mechanic about naval warfare on the ship to ship level. To paraphrase one of his comments– if you are a diehard naval gamer that stresses over armor thickness and gun calibers, this is likely not the system for you. Units of movement are single small ships for the various racial types on Tekumel, all of them roughly 15mm in scale and of galley or large war canoe vintage. The simple sailing rules of movement preclude full speed straight on movement into the wind (which makes sense). Players play a single ship and its crew, which all have a secret goal to attend to. 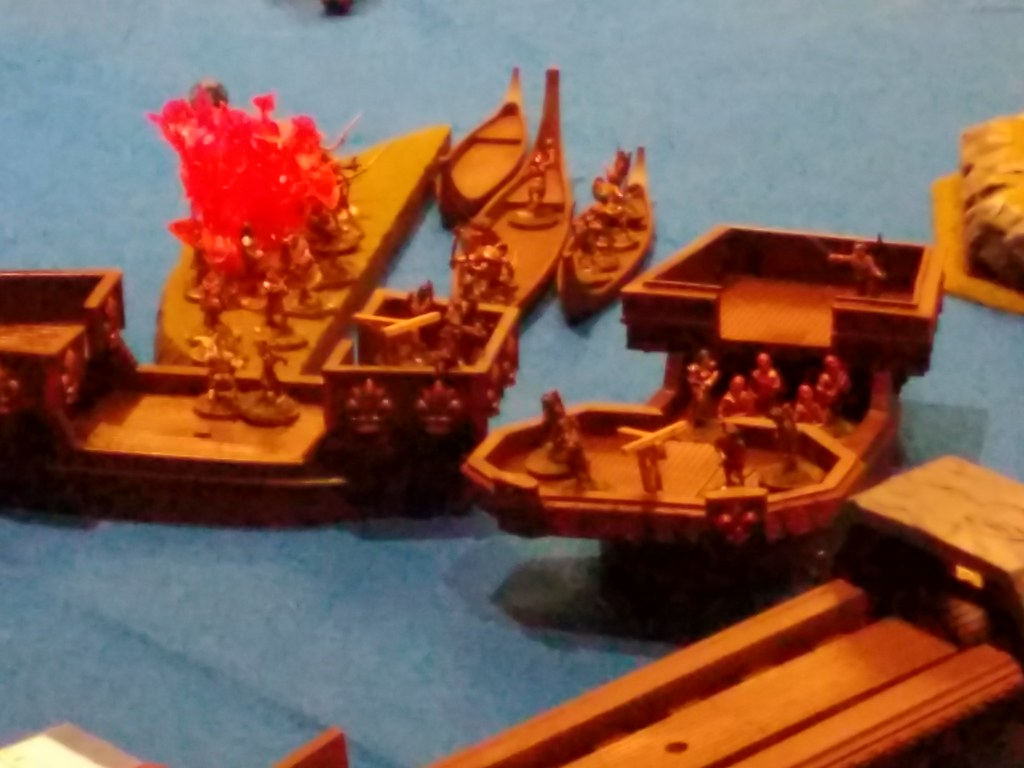 The playing area was a standard 5 x 8 smaller playing surface– aquatic with small volcanic islands represented on them.. most with alien vegetation and some with structures. Dotted here and there were “opportunities” to loot sites for artifacts from the past.

I was assigned the H’luss, the native species of Tekumel, which are a sort of large six limbed insectoid race. They are depicted as being xenophobic in the extreme and rather hateful of the alien usurpers (which is how they view all the other races). Of all the races on the board, I was the one with a submersible, which looked like this: 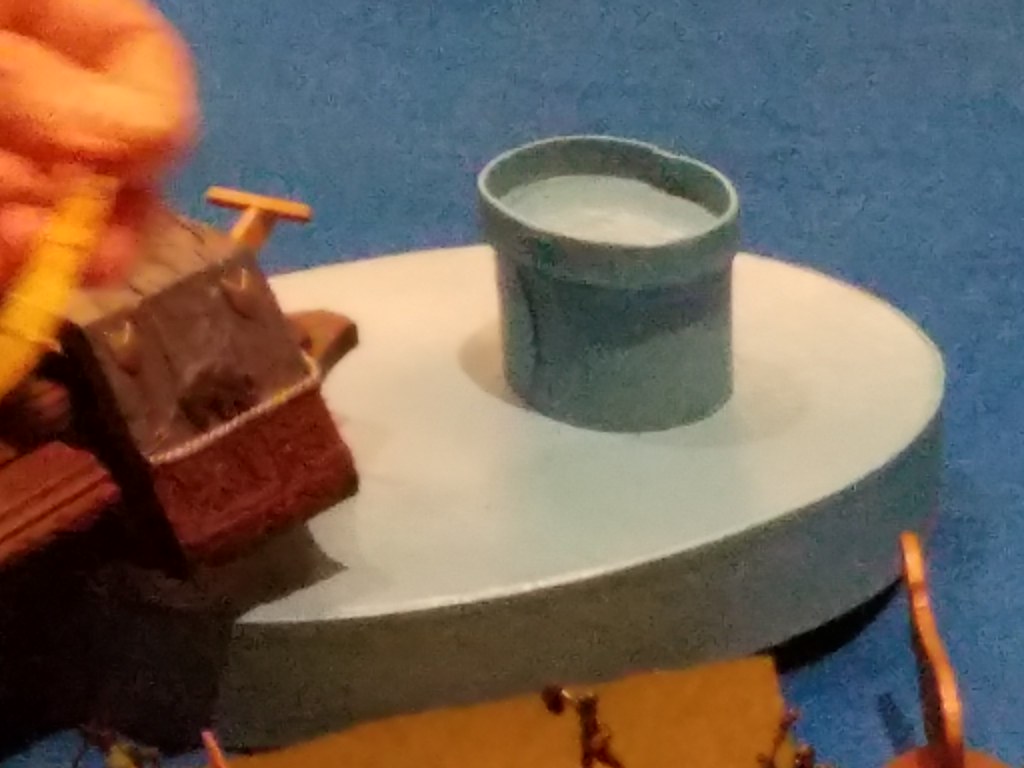 The H’Luss Submersible, which I captained.

I had had this faction the last time I played and it was a lot of fun to play them. Unliek everyone else on the board I didn’t move normally== I plotted movement on a piece of paper and showed it to the GM to give him an idea of where my submersible was. Last year, I played it to the hilt and it made for some hilarious moments: 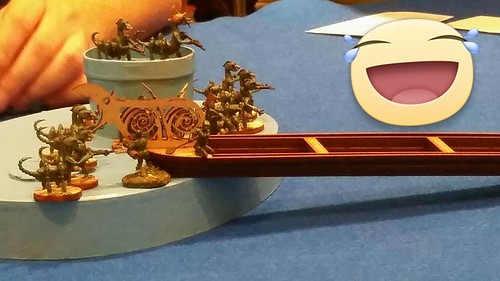 We had a much denser playing field than last year, it would seem.  I misread my goal entirely and as it had something in their about this being OUR water (being natives) I thought I had to look for a well!  Nope, he meant “Go steal alien tech and kill them all”.. so I wasted some time on non-existant subtlety, I admit it.

I made up for it by trying to reprise the old “surface and swamp the ship” trick which worked last year.  A large Tsolyani Frigate was parked on the same island as the Hlutgu, who were my victims last year.  I tried to surface under the (now empty) ship and drag it away, leaving the Tsolyani stranded.  It partially worked! 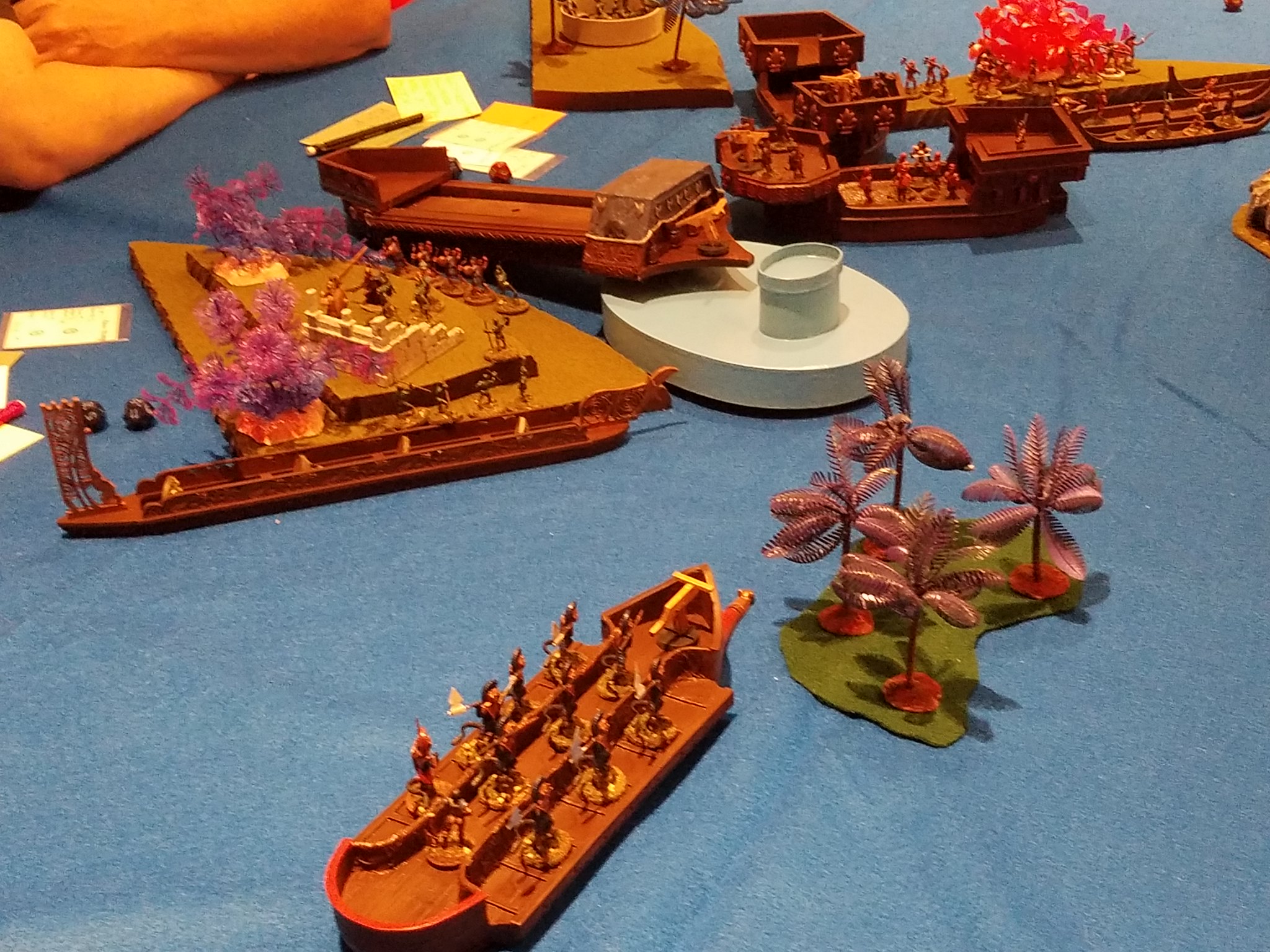 Unfortunately a Tsolyani frigate is substantially heavier than the Hlut Go canoe and I ended up submerging quickly or it would destroy the boat. Mission accomplished, though, they humans were dispatched without a shot fired. 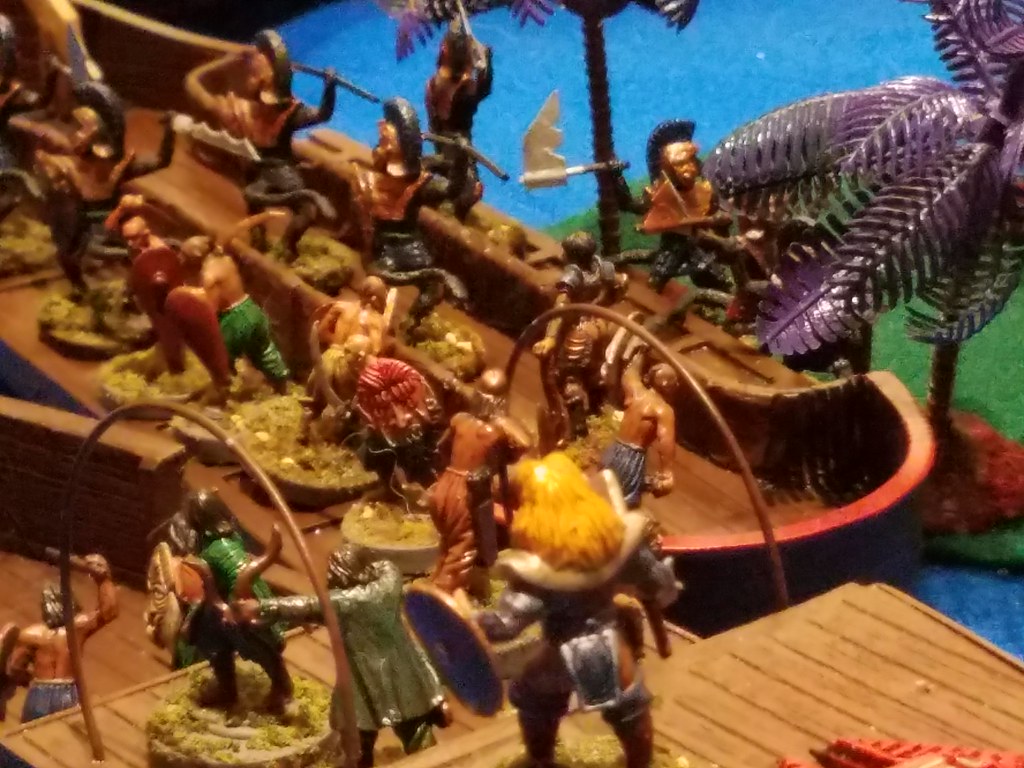 Out on the rest of the seas of Tekumel, the ships were fighting a hard scrum.  I surrendered any idea of taking the Humans frigate for myself, and indicated to the (giant lizardmen, forgot their name) that they could have it, even if they get more points from it. The smaller group of pirates with canoes were all swamped or died fighting. The various other ships got into a traffic jam in the center. The (big lizards) and (giant artificially made people) then got into it right above me, so I swam under them and came up behind them. I had to get some tech.  See that red McGuffin on the back of his boat?  That was part of a multi-piece “something” that it turned out I had to go look for.  Might as well start at the beginning. 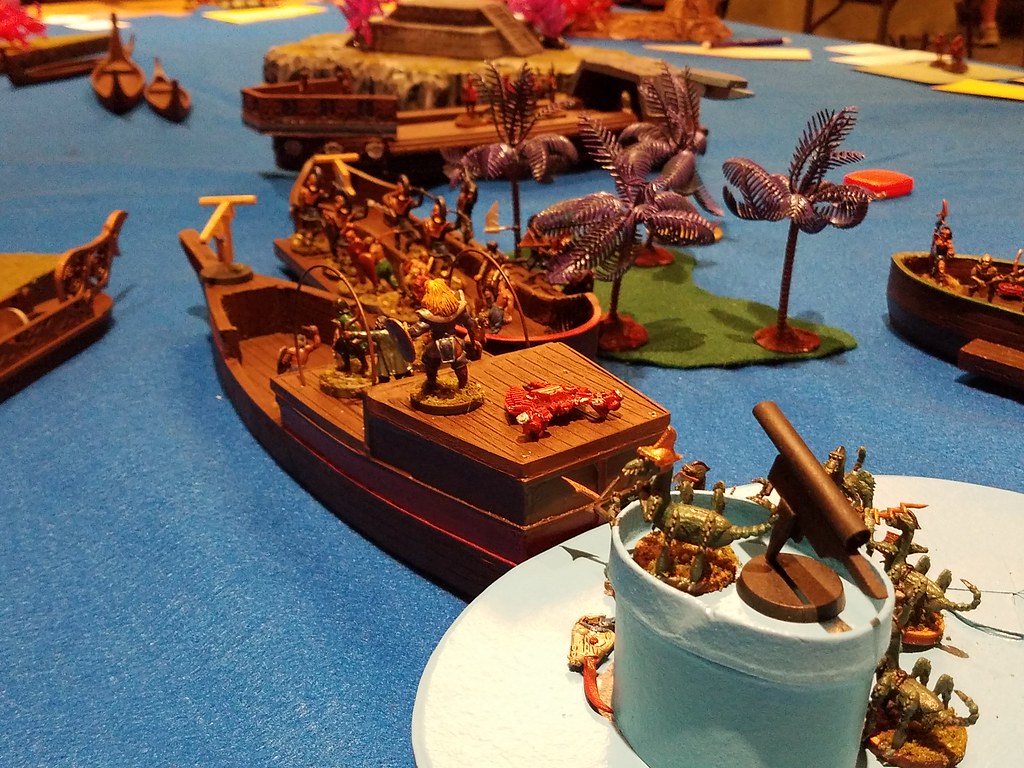 I surfaced next to their stern and brought MY ancient artifact on deck to fire at them.  The results were.. unusual.   The weapon of the ancients fired, then blew up, making the back of the enemy craft (and his replacement captain) into plasma.  Oddly it didn’t do much to my boat, beyond killing one of the lower ranked H’luss crew. 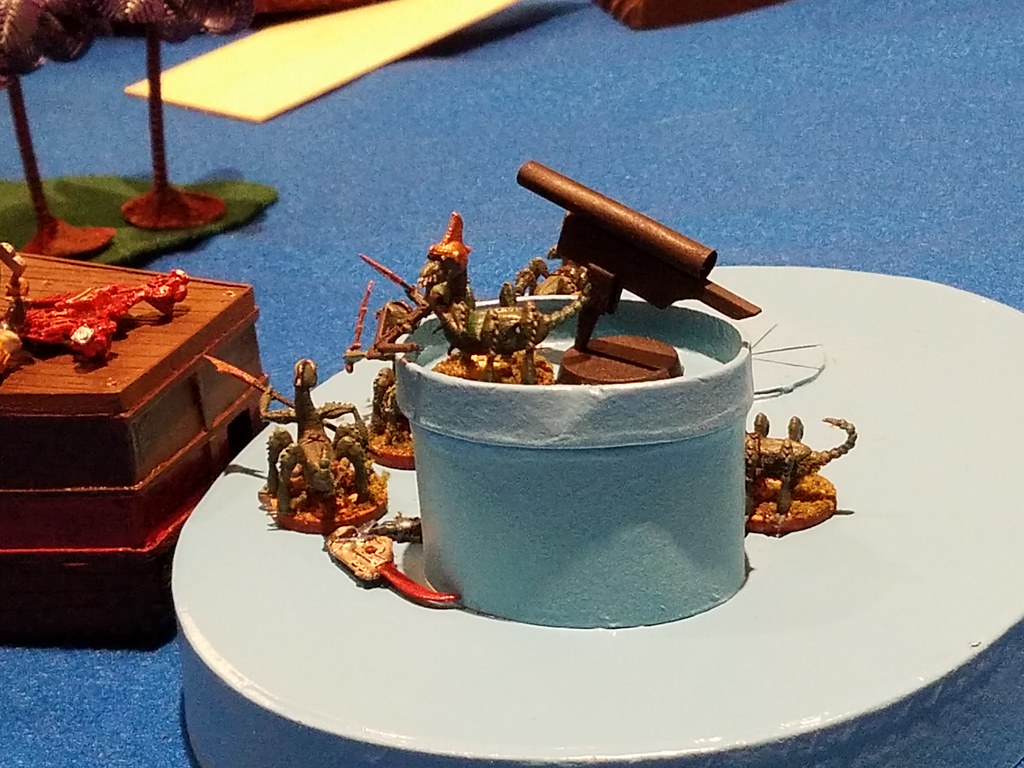 And that was about that for the game.  It felt short but it was about 4 hours.  I didn’t get the chunk of artifact, but I did prevent my enemies from claiming it.  I had wasted a little too much time trying to achieve a wrong goal early on to acquire it it.  Victory was determined mathematically, based on things accomplished.  I narrowly beat out the guy who took the empty human frigate as prize, because the GM was being nice about me attaining my goals.  So the stunning victory of the H’lussi on the high seas underscores our basic philosophy: GET THE HELL OFF OF OUR PLANET, ALIEN SWINE

If memory serves, I think the HAWKS (Hartford Weekly Kriegspielers) had an entire “Tekumel track” at last Historicon, and this was just one of those games.  I may be hallucinating.  I know I played in this game, and had a great time with it– the rules were simple, the setting was exotic and the game told a story.  Well deserved bravo zulus to Steve Braun for putting on this game, I really enjoyed it.