As often happens once a HMGS convention concludes, self-styled experts will claim a certain genre is overtaking historical game entries, it’s a general sign of decline of HMGS and et cetera, blah, blah.  Those of us who have been attending for years have seen the same old argument restated every year,  sometimes posting outrage at the large number of “alt games” at a convention while many attendees are still en route home.  Well, about that… As I have done for 12 previous conventions, I have created a Guidebook App module for Fall-IN! 2016.  In order to make that happen, I have to take data from many sources– tournaments, Hobby U, seminars, etc.  The most important source is what I build the schedule with, the Events sent to me from the Events Coordinator.  So I get to see the raw data from the registration database every convention.

Once all of that is put in spreadsheet form, it’s remarkably easy to sort the data by period, use the COUNTA function, and get totals by period.  There’s nothing particularly slick about my methodology, but I have confidence in it because almost everyone uses the categories established by HMGS as part of the event registration process, although this can be overwritten, and then a judgement call is needed.

So here’s the count, with a couple of caveats– I’m making a judgement about what is historical and what ain’t, and I agree, you might interpret this differently from me.  I am counting fun skirmish game categories like Westerns, Chariot Races, Gladiator fights and Pirate fighting as “historical”, since they take place in a defined historical period.  This year, I also include 2 “Other” games as historical, since they are roughly Napoleonic Age of Sail games, and I also include 3 games that label themselves as “Victorian Alternative Naval” as historical, since they use historical ships in “What If” scenarios.  I rolled up a couple of other periods and put “Pulp” in the “Non Historical” period (since I consider “pulp” mostly a kind of borderline fantasy period springing out of VSF).  I’m only counting non-tournament events.  Most importantly, this data is a snapshot as of last weekend. 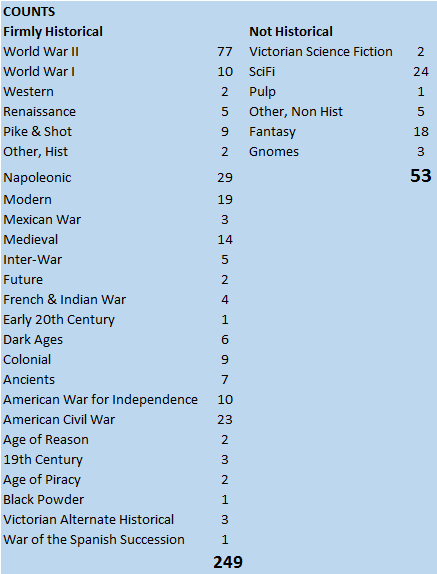 So there you are.  Again.  Historical Games ROUTED Non-Historical Games, without question.  In very broad terms, non-historical alt style games are barely 17% of total. 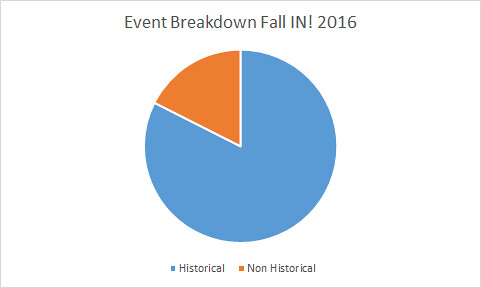 What periods walked away with it? The classic 3, of course: World War 2 (75), Napoleonic (29) and American Civil War (23). That old devil Science Fiction (which I rolled up four flavors of Post-Apocalyptic games into, Zombies mostly) returned a 24, and Fantasy 18.  Surprising?  Hardly.  Many of those 75 WW2 games are rulesets that are commercial successes and very recognizable.. like Bolt Action.  There just seem to be far fewer F&SF household names at HMGS conventions– those players go to other conventions, it would seem.

So there you have it! Another convention, another year without the sky falling in.  HMGS shows are still firmly historical, by a wide margin.