We had a short window last Sunday to get in a game of Frostgrave at the Comics and Gaming Store in Fairfax, VA. We were contemplating doing a published scenario, but didn’t have the right figures for it. So we did a free form Frostgrave game, my ad hoc level 4 Chronomancer versus level 5 (not sure.. maybe a Witch)? 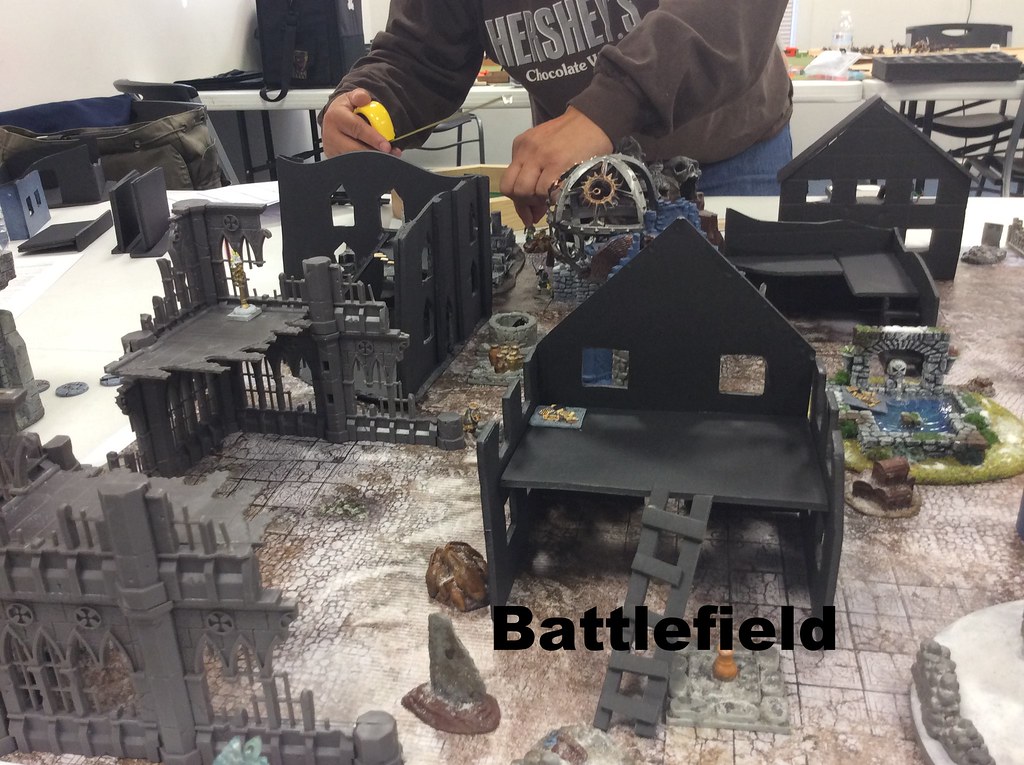 I wanted to make the playing field dense. In Frostgrave, it’s far too easy to nail someone from the far side of the table, if there are no intervening terrain pieces to modify the shot (usually arrows). Also, the backstory of Frostgrave is Felstad (which the city this is supposed to be) is described as a dense urban environment, with narrow streets and all sorts of nooks and crannies. 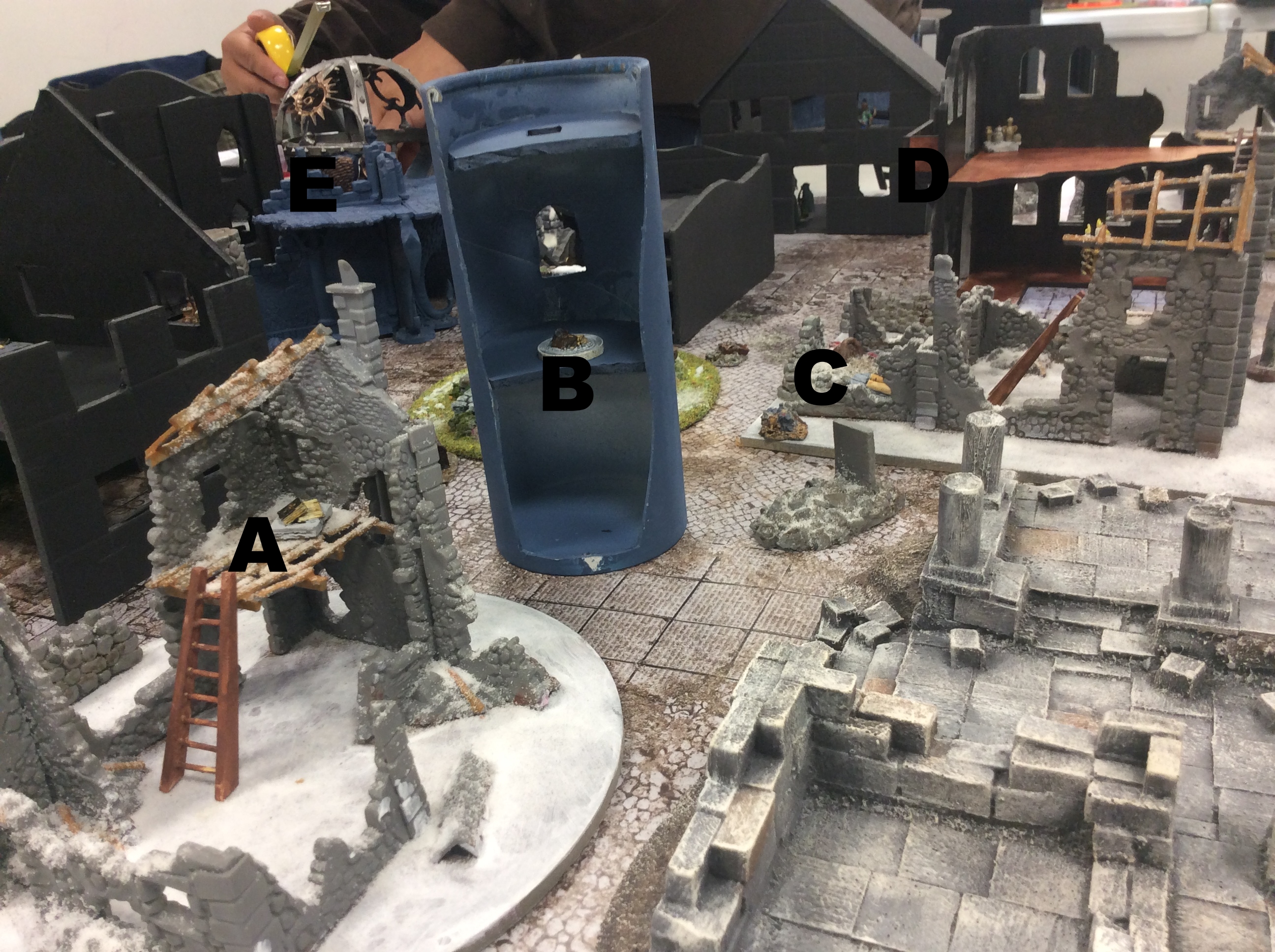 We alternated putting out treasures, as per the rules.  There were four pieces that were relatively close– A, B, C, and D (see above).  E was a “lure” set in the “Orb of Power” which was a spell amplifier of sorts.  I figured I could score A, B and C from my entry point, even with Archers in the far area of the square.  I added a lot of standing terrain bits to break up line of sight.  When I play Subir, I can be certain of a few things; He’ll focus on spells that teleport, telekinesis, leap, or jump away from competitor gangs– or he’ll take option 2 and select spells that block me, like Walls.  One thing that he’ll always do is put a couple of archers up on a second level, where he can enjoy line of sight and pepper away as an annoyance.   He was true to his patterns– this was a night of Leap, Telekinesis, Teleportation and Archers set up high. 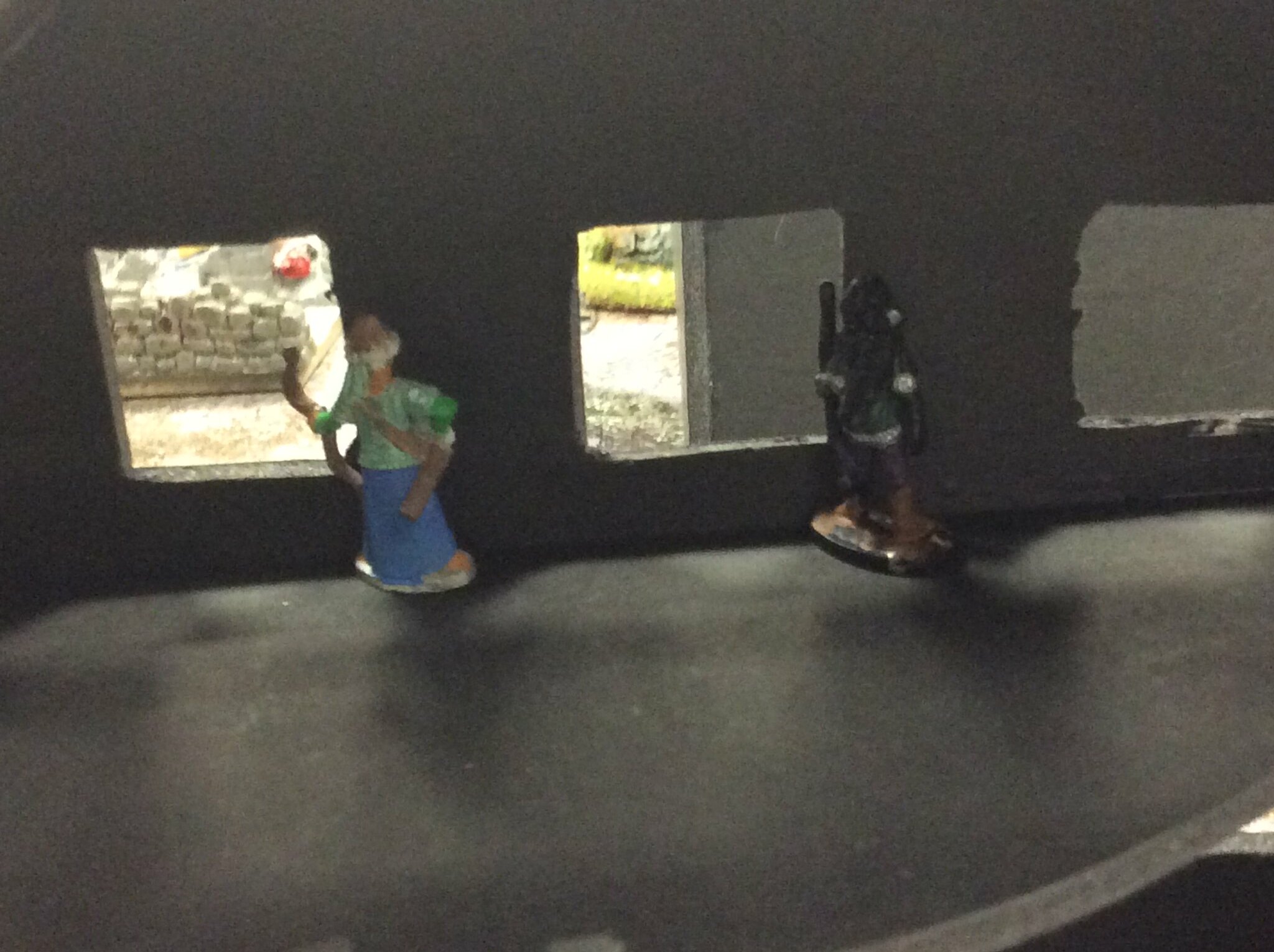 I split into two teams, one lead by the Chronomancer and one by his Assistant.  My Chronomancer and his team hit the tower to retrieve Treasure B (above), and easily nailed C, but D was going to be hard to get to unopposed and E almost impossible.  There was also a treasure in the fountain behind the tower (not shown) that I’ll circle around to. 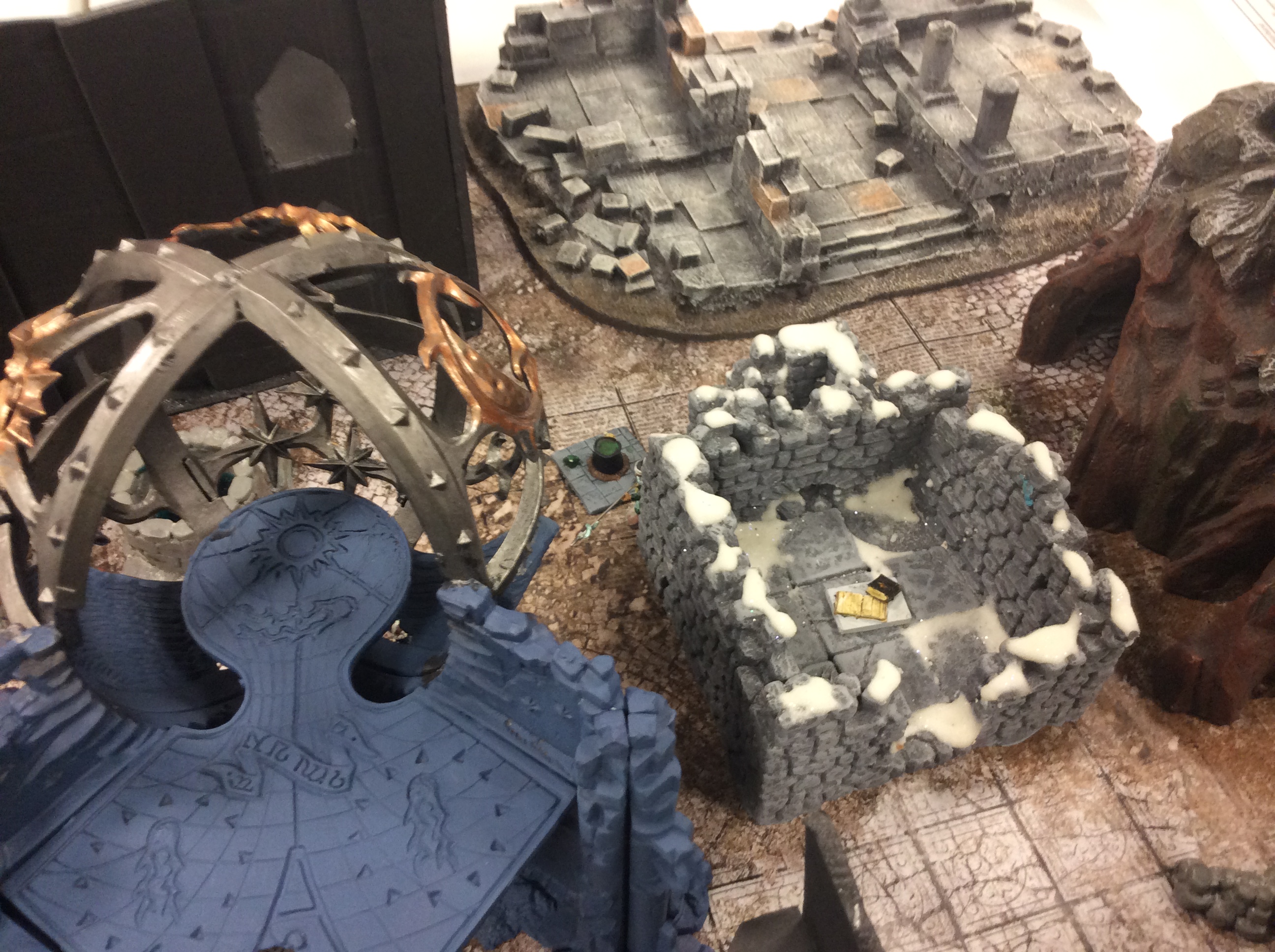 This is the Orb of Power, which is a Games Workshop Numinous Occulum model, repurposed (I have one too).  If the wizard stands in the Orb, he can cast spells with big pluses– think of it as a magic battery pack.  It was closer to Subir’s starting point than mine (point E in the photo above), so I didn’t really think I would get a treasure there, nor could I make use of the Orb. 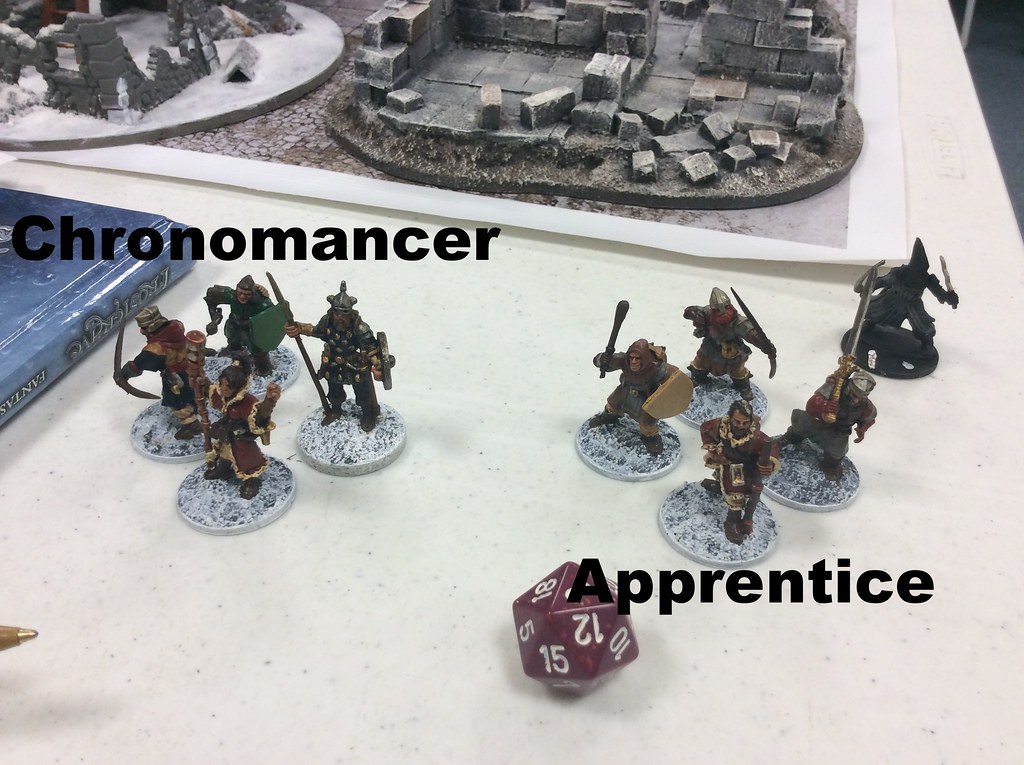 My two groups moved close to each other and supported each other. Subir was much more spread out. I think he had the better idea.  Being a level 3 guy, I had some good hirelings.. A Man at Arms, two Archers, two Thugs, One Infantryman, one Thief.  A good mix of muscle and smash and grab. 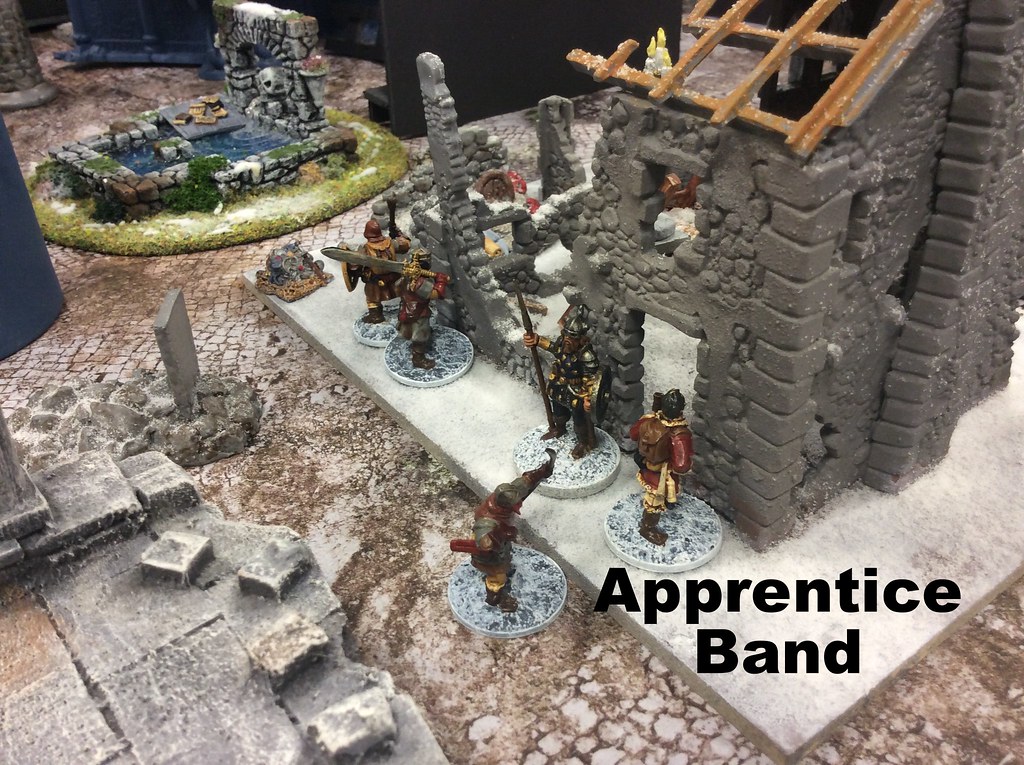 The apprentice easily converged on Treasure C while the Chronomancer took Treasure A in the tower.  There’s another one in the fountain in the background. 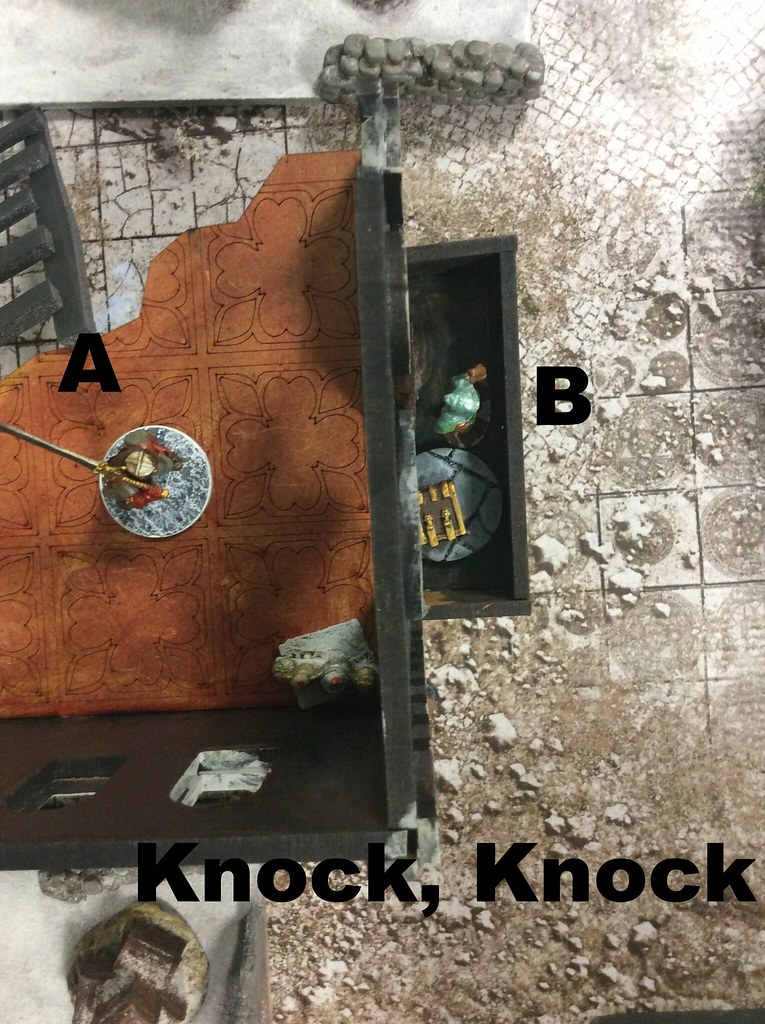 he wanted to show off.

Or course, Subir would try a little razzle dazzle.  He telekinesed the treasure from the Orb of Power dome, and then LEAPed this thug (position A) to the second floor balcony where treasure D was.  He got to the treasure first, before my Infantryman could stop him (position B), crowed a little, and LEAPed out. 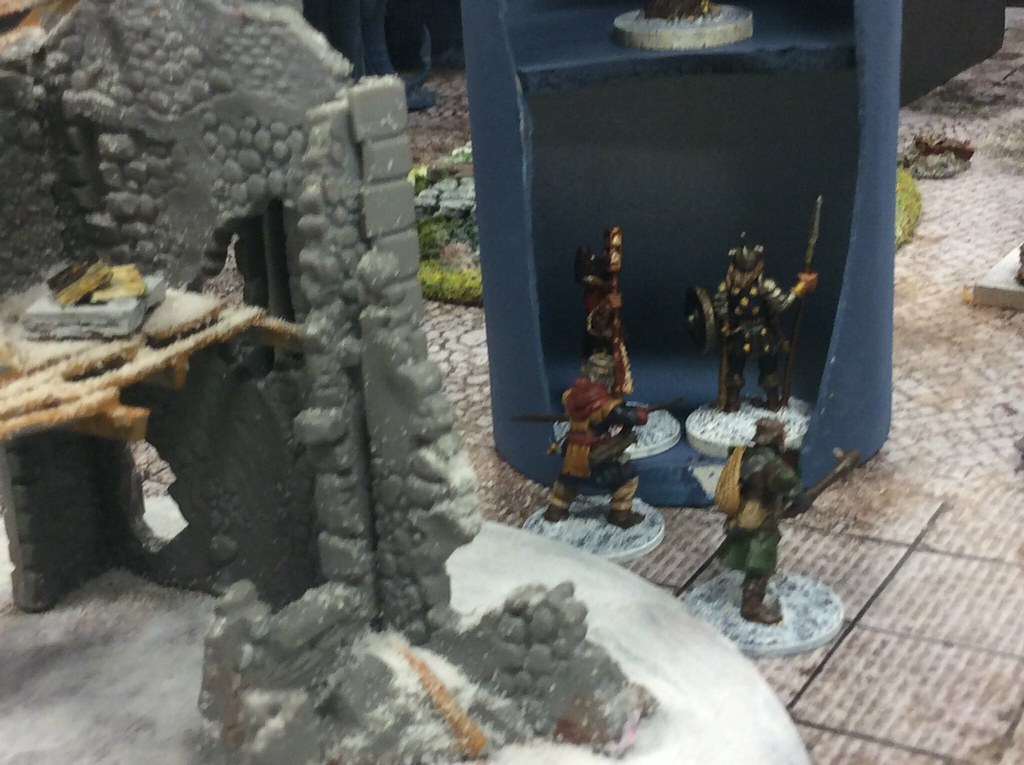 My Chronomancer basically did what Wizards do in this game.. got under cover, got up high, and got behind an Archer who provided cover.  My accompanying Thug moved the treasure to the map’s edge, as did the extra thug near Treasure C.

We did run the game with a rule I like to use– whenever you pick up a treasure, you roll on the Random Monster table.  This didn’t create a lot of distractions.. well, mostly, until… 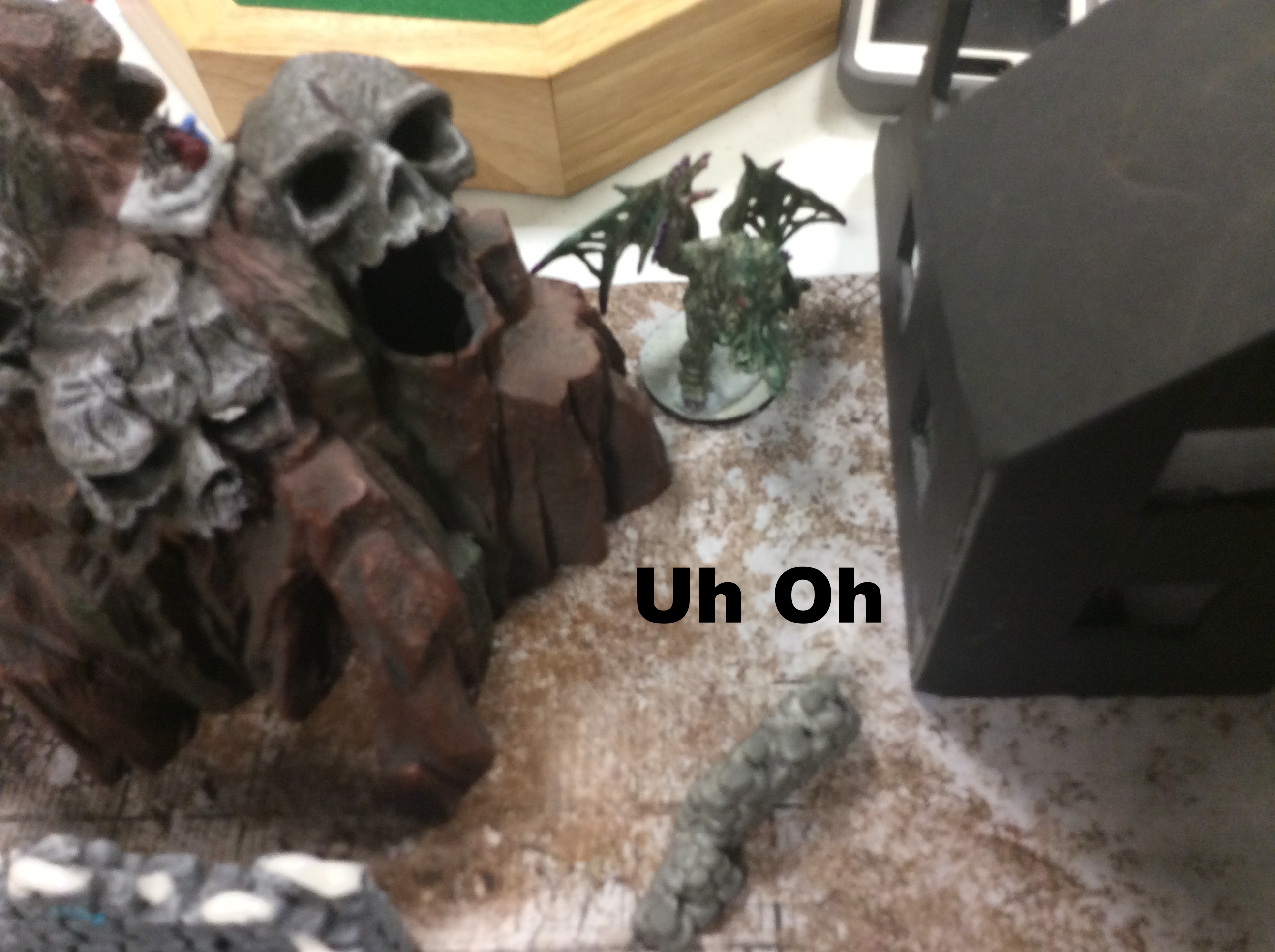 No, it’s not Cthulhu. I don’t have a worm figure, and that’s what Subir rolled. Bad luck for him! 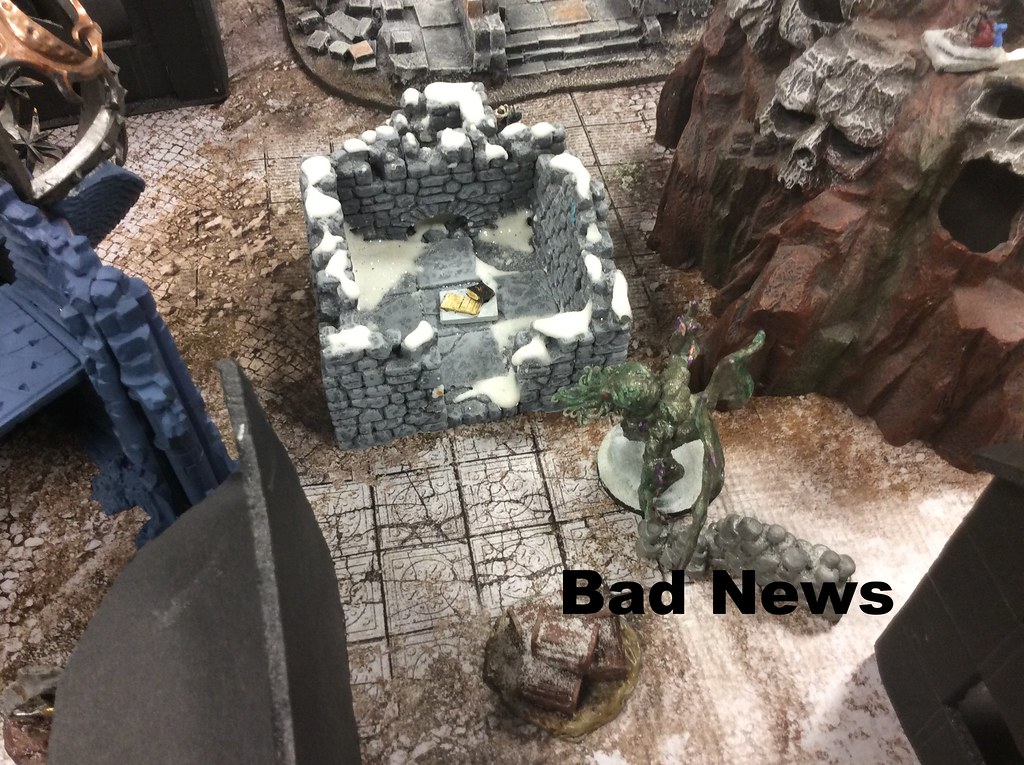 As Subir and his gang cowered behind some rubble, I tried something silly. I had placed a WIZARD EYE on the flat side of the wall, near that balcony Treasure D was on. I had STEAL HEALTH which works “In Line of Sight” to a target. So by extending Line of Sight, My Chronomancer was able to steal health from the Worm itself, from across the board. I even had to sacrifice a couple of hit points, to make a spell roll work, and immediately got it back from the demon! Now that’s a hoot! My attempt to intercept treasure D on the way off the board, which caused me to lose my Man at Arms, sadly, pincushioned with arrows. 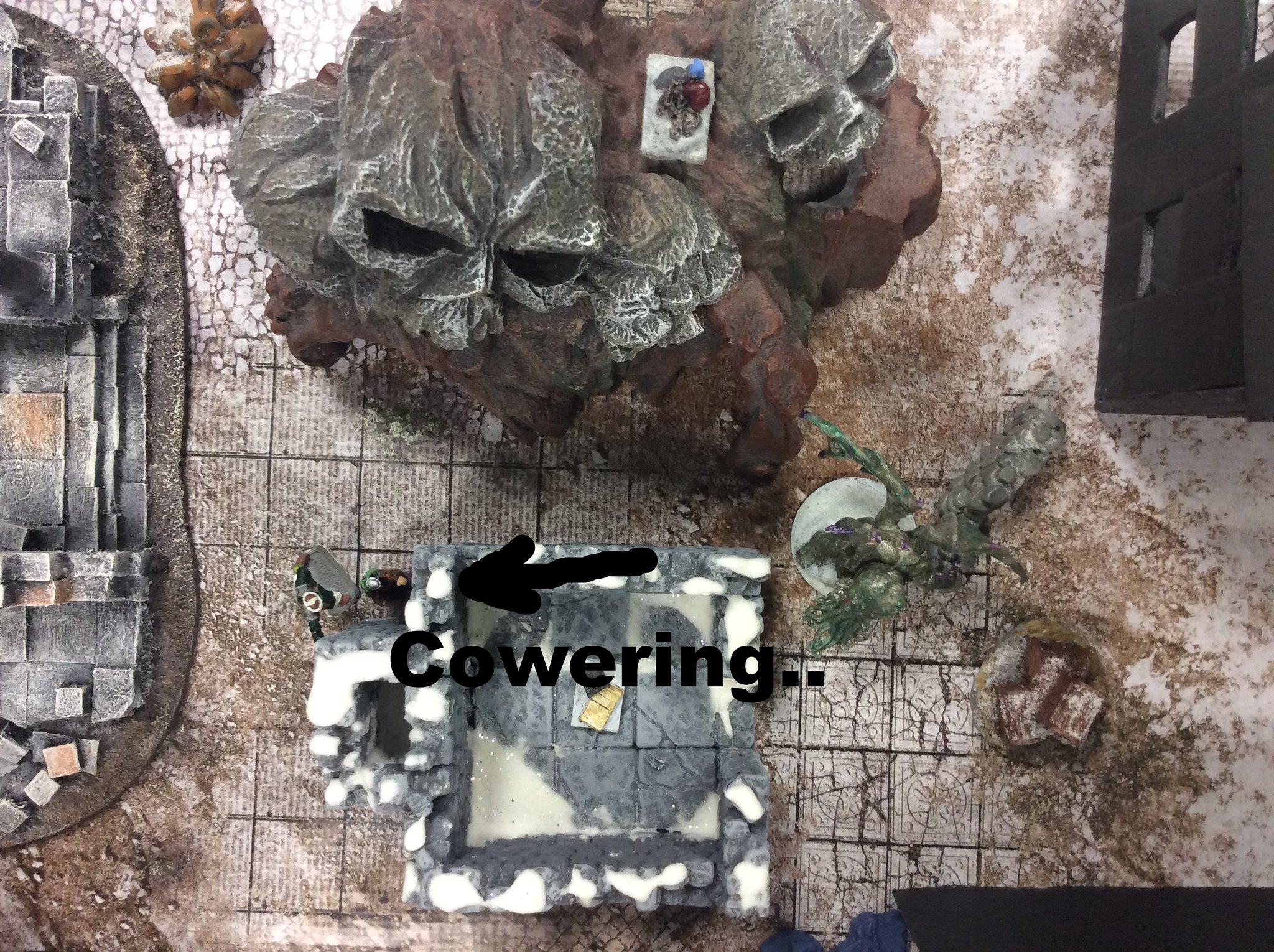 Well, sadly, an urgent call from home cut our game shorter than I would like, or I would have nailed the treasure in the fountain, too. As happens a lot with Frostgrave, the game tied up 3 treasures to 3 treasures. I don’t collect warbands like Subir does so I didn’t roll for the treasures. I did lose a guy to an Archer attack, but that’s life, warbands are kind of expendable.

A great time, I only wish we could have played longer.