28mm Greek Galleys? Deal me in!

I’ve always been partial to galley warfare games, but usually at a drastically different (smaller) scale than what I usually play in.  What has come down to us about the naval warfare of the Ancient World is at best somewhat fragmentary.  There are some excellent books on the subject, including The Battle of Salamis by Barry Straus and Naval Warfare under Oars by by William Rodgers.  The thing is, we have a generalized idea of how these ships fought, and what they looked like from pictures and pottery shards.  We know these big battles like Actium and Salamis were fought in history.. but it’s hard to conceive in the minds eye of literally HUNDREDS of galley ships smashing into each other in a single engagement.  That’s why I’ve always played with galleys (when I have) in smaller scale like 1:1200 with an odd detour into 15mm sometimes.   The battles are just too huge to grasp what a single ship fighting another single ship action would be like.  The “Galley Period” for want of a better name for this period of naval science, lasted a long time and witnessed much innovation.  The swift, streamlined galleys of Salamis (481 BC)  bore only a superficial resemblance to the giant behemoths that fought in later periods.. slow moving ten banked monsters were at both sides at Actium (31 BC), for instance.  Yet both are “galley engagements”.   Much like how a 19th century 74 Gun Ship of the Line was a complex  instrument to navigate and fight, involving many concurrent, complex tasks, so must have the operations of a Greek Galley in 481 BC have been equally complex, with many concurrent actions transpiring to bring a ship to battle.  The Steersmen had to guide the ship into a path to ram.  The Rowers have to act in unison to increase the ship’s speed to make the ram a success.  The Overseer has to keep the pace and relay the Officer’s intentions to the rowers.  The Officer has pick his targets and deploy Marines and Archers.  The Archers are firing away at the enemy ship as they close.  The Marines are queuing up to  leap across the gap between ships and engage in brutal hand to hand combat.  All of this will only happen if the weather conditions are absolutely perfect; even a moderate swell could dampen martial ardor on galleys, which swamped easily.

So, as you can guess, there’s a lot going on in each of those tiny ship models we so casually assign number factors to, or damage points and ‘crew factors’.  Traditionally, we tend to ignore this level of action in favor of a more grand tactical view of ancient combat. … but.. .what if?  What if we had a scale where we could actually SEE some of this beehive of activity?  Would that make a great game, or a tedious one?  I suspect it depends on how much of the action you generalize.  In any event, the mechanics of any theoretical ship-to-ship galley warfare game would be a whole lot easier to envision in a larger scale, and as of today, that’s possible.  I noticed shared post on the Naval Warfare group on Facebook: 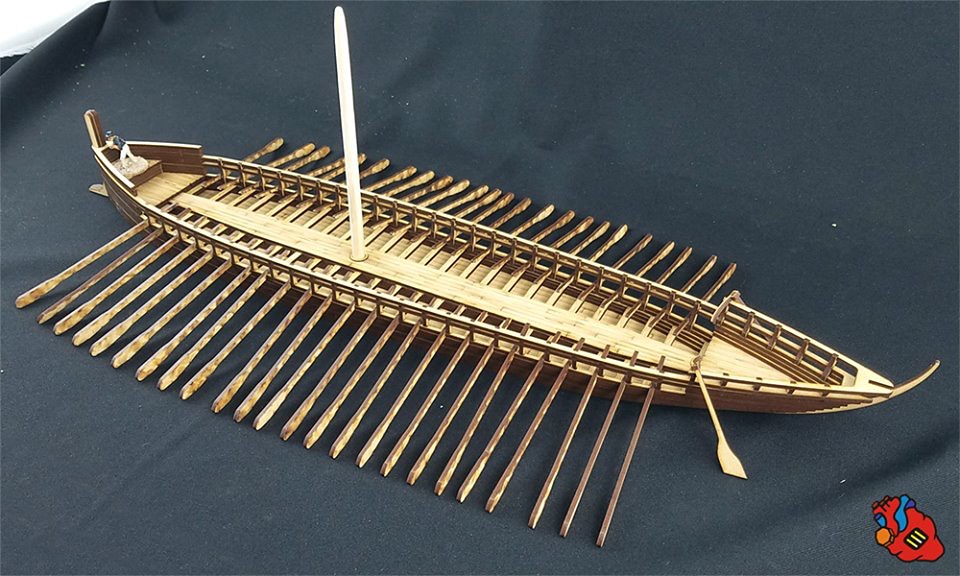 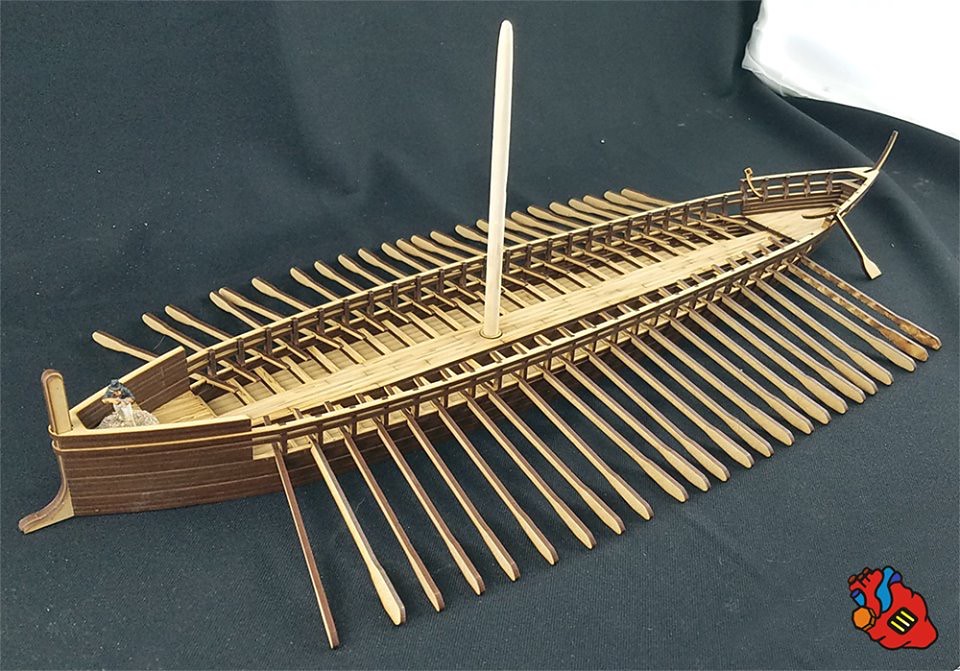 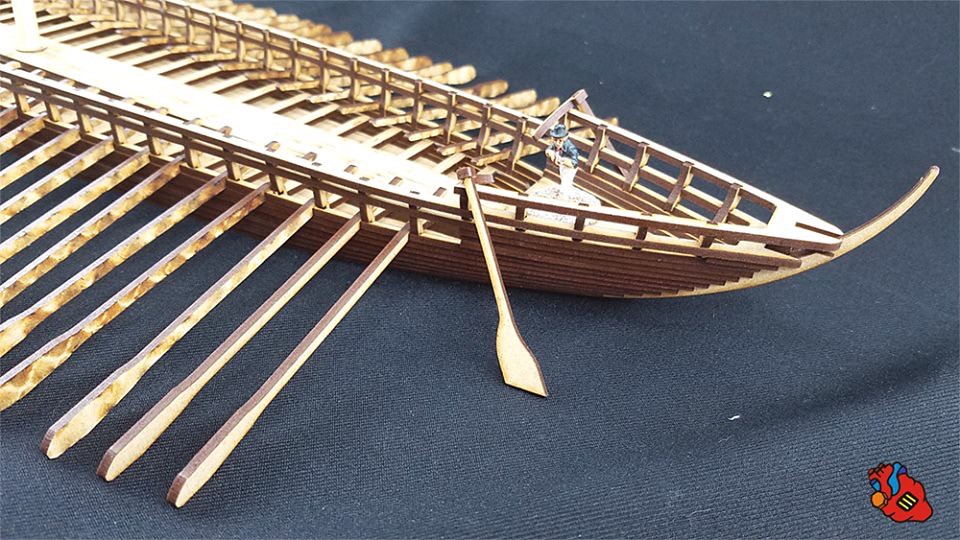 As you can see, this is a laser-cut nautical galley model in 28mm, not unlike my recent Maori war canoe purchase, only an order of magnitude more complex. The designer is Alex Landing, whom I exchanged a few pleasantries with on FB. His company is IRONHEART ARTISANS and as of today (9/30/16) the galley isn’t on their website but soon shall be. I was quoted a retail of 62 dollars each. Now that may seem a trifle steep but I don’t think so.. this is a complex model with a ton of parts. It will require careful assembly. The benefit is that the finished model will certainly A) look fantastic and B) provide enough room to model a ship to ship engagement in 28mm. I could easily envision a game design that models aspects of galley warfare that we rarely add to games, such as rower fatique, deck to deck battles, turning and navigating, oar sheering, and other fun period naval problems. I’m kind of excited about the idea of such a game, and now I might be able to make it happen. The figures wouldn’t be too hard to get– 28mm Greek peltasts and slingers for the Marines, plus Archers. The down side is that it will require a huge amount of playing area for relatively few players– can you imagine a six player game in this scale?