So THURSDAY was an entire day full of Big Dang Boat goodness.  We knew going into it that BDB wasn’t exactly going to play lightning fast, but the game is so silly and rife for story telling the kids got into the journey, not necessarily “winning” anything.  I tried out a new initiative method that made a turn far more easy to wrap one’s head around than before, and we fine-tuned that.  The Campers really seem to have enjoyed themselves during this game.

Thursday also had two of our regular players out, so it played faster than the day before.  I played the Gnomes of Batenburg (running the Siege Machine) as Reid (our guest from the previous day who couldn’t come two days in a row).   I played The Bone Brigade defensively according to the player’s wishes. 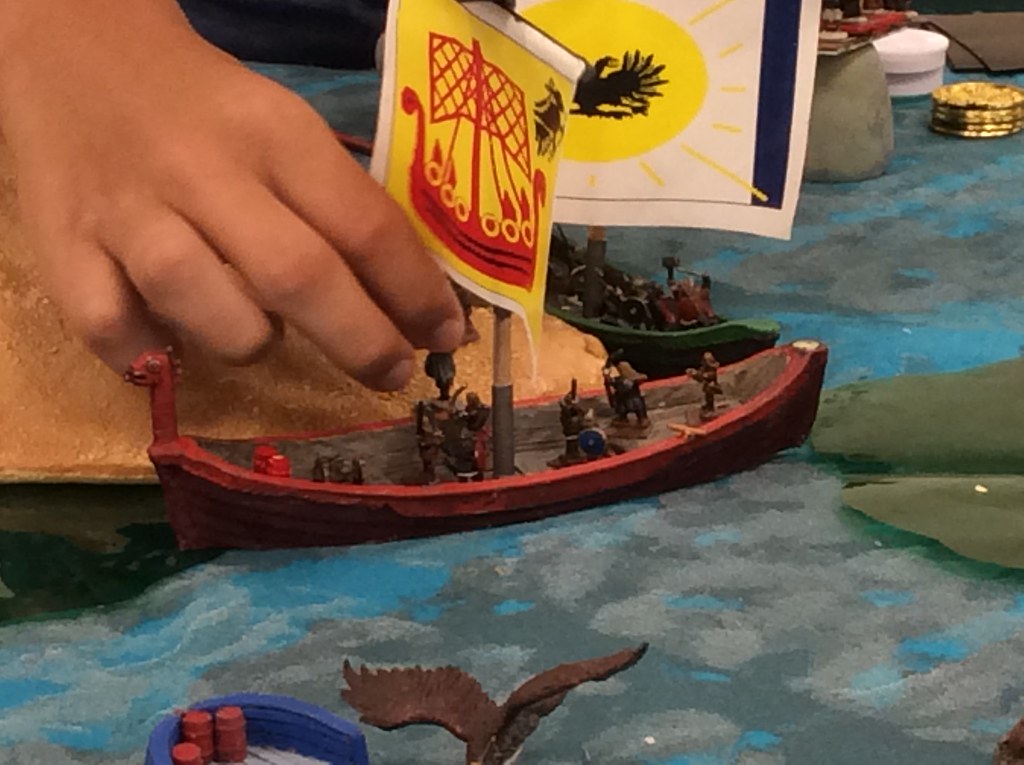 Stefan plays the Ragnar Brothers here and he did a great job… landing on an island, assaulting the base there, wiping it out and looting the tower. It turns out the tower held the ORB OF COMMAND in the basement, but he didnt’ know what to do with it.. yet. 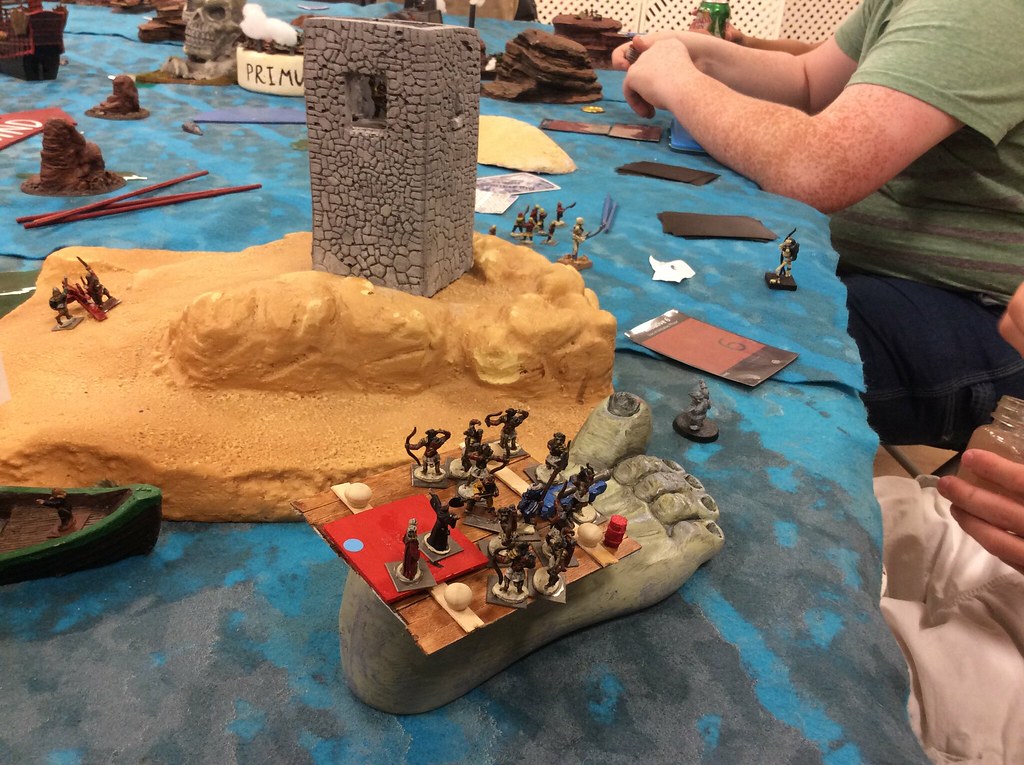 The Cult of F’Vah (driving the Foot of the Dead God) pulled up and (being allies with the Ragnars) volunteered one of their steersman-mages to research the Orb for the Ragnars. It took a while but he got the gist of what it was, how to use it and what it would do next. 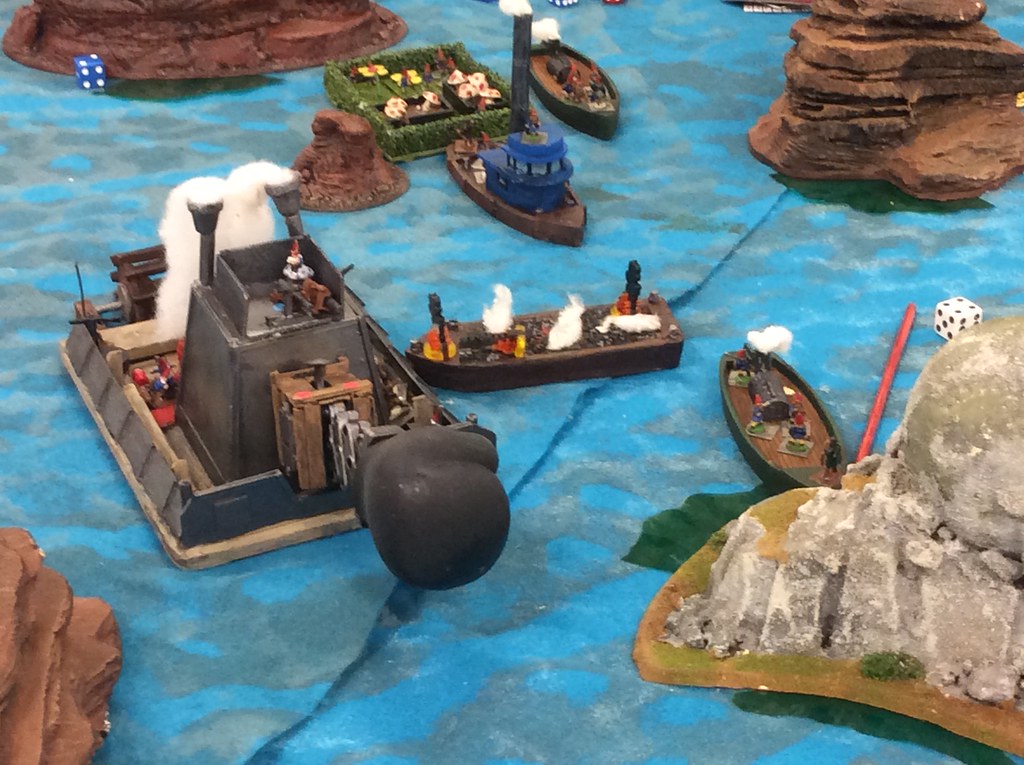 The Garden Gnome “Hippies” took on the Industrial Gnomes of Batenburg. They were confused as to what to do, and being lead by a young man, decided to attack instead of negotiate. That works. Unfortunately it depleted both crews quite a bit. He did have Gnogres to fall back upon, however, and after consulting the Red Bag of Courage, boarded the Siege Machine with his blood-mad crew, ready to conquer or die trying 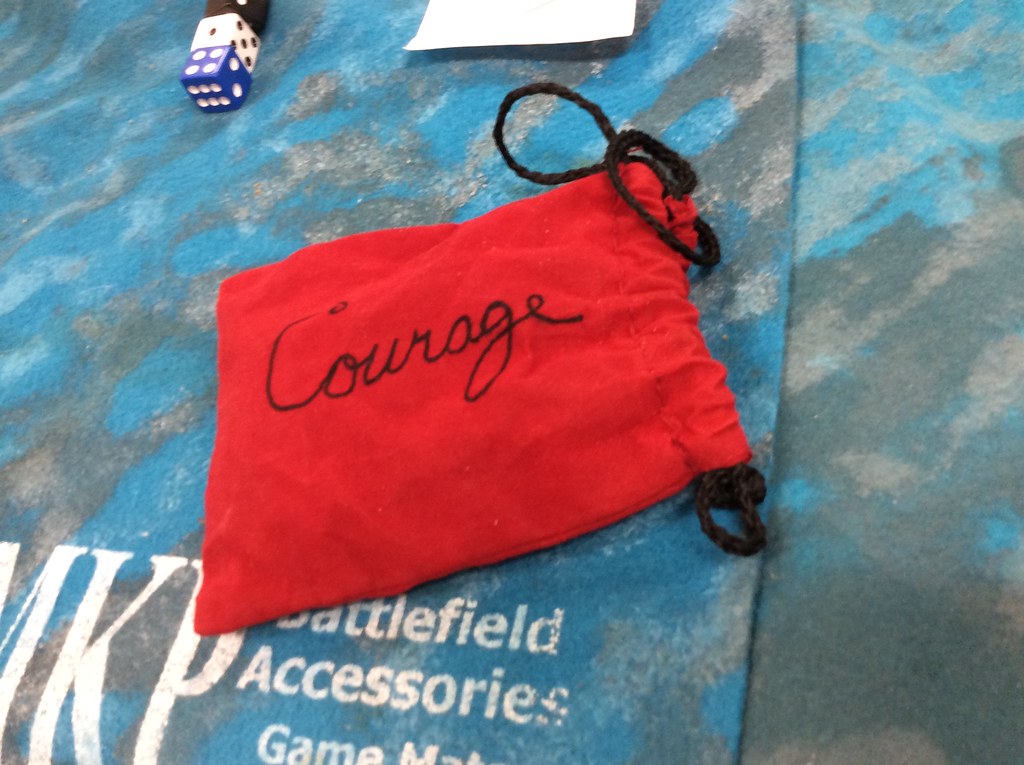 Visiting the Red Bag of Courage, to test whether one has the nerve to board an enemy ship during an action.. Will he draw “Blood Tested!” and get a +1? Or “Quaking in Fear” for a big minus? Or just get a “Flee” result? Who knows? It truly is in the hands of Dame Fortuna. 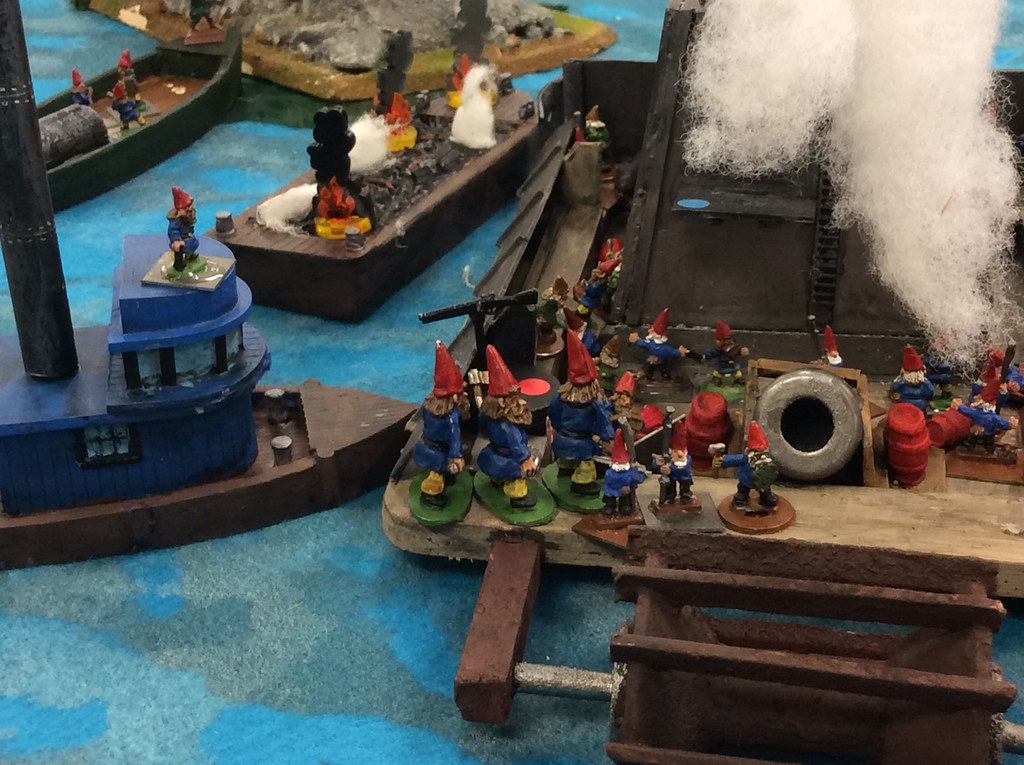 I tried to instill into Michael, the young man running the Little People Collective/Garden Gnome soldiers that his actions would start a civil War in the nations of Gnome-hood, but he wasn’t impressed. 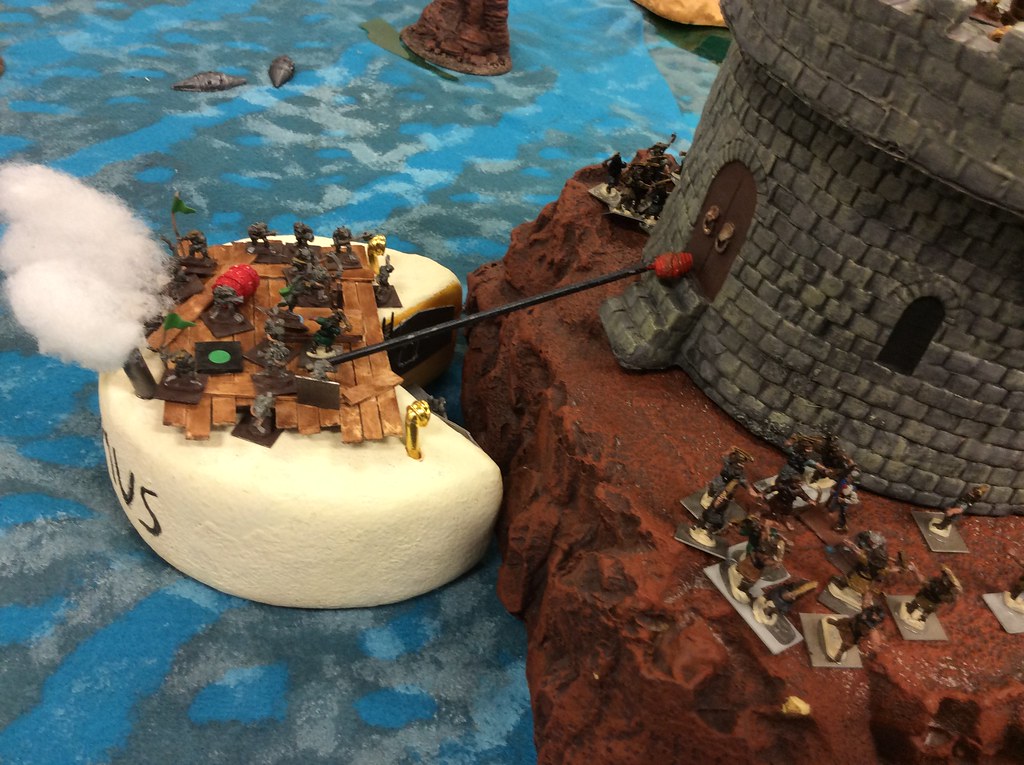 Lastly, the Rat-men of Ingoldsby had a chance to be unlikely heroes yesterday! They moved the PRIMUS into ramming range and rigged a spar torpedo forward. Then they steamed full speed at the door with a charge attock a pole. Worked like a charm, blowing the left door off the hinges. Out jumped the Wizard’s Slithin bodyguard, ready to kill. Here’s the thing, when you purchase 30 slingers from the gnomes, you have the quality of quantity going for you. It was like firing buckshot. Eventually the enraged ratmen’s mercenaries fought their way into the base do the tower, climbing over a mountain of Slithin and Human dead. They moved into the hall of the tower expecting to find the Orb of Command, and found.. nothing. It had been in Piper’s Fort all along. Now one of the most fearsome battle weapons was in the hands of Ulf Ragnar of the Ragnar brothers, being backed up by the F’vaavian Cultists. What could possibly happen next?

So we ended it there and packed up BDB, and I gave out some shining moment coins for particularly great play. We handed the victory to the small coalition of Taylor, Stephen and Cedric, who didn’t mess around and acted like true allies. The Stahlheim and Sea Elves (run by Taylor) ran interference vs. the tower, The Ragnar Brothers raided the island that kept the Orb and slaughtered everyone (like one does) and the Cultists of F’Vaah deciphered the Orb’s Power and taught Ulf Ragnar how to use it. A great day of silly nautical fun! 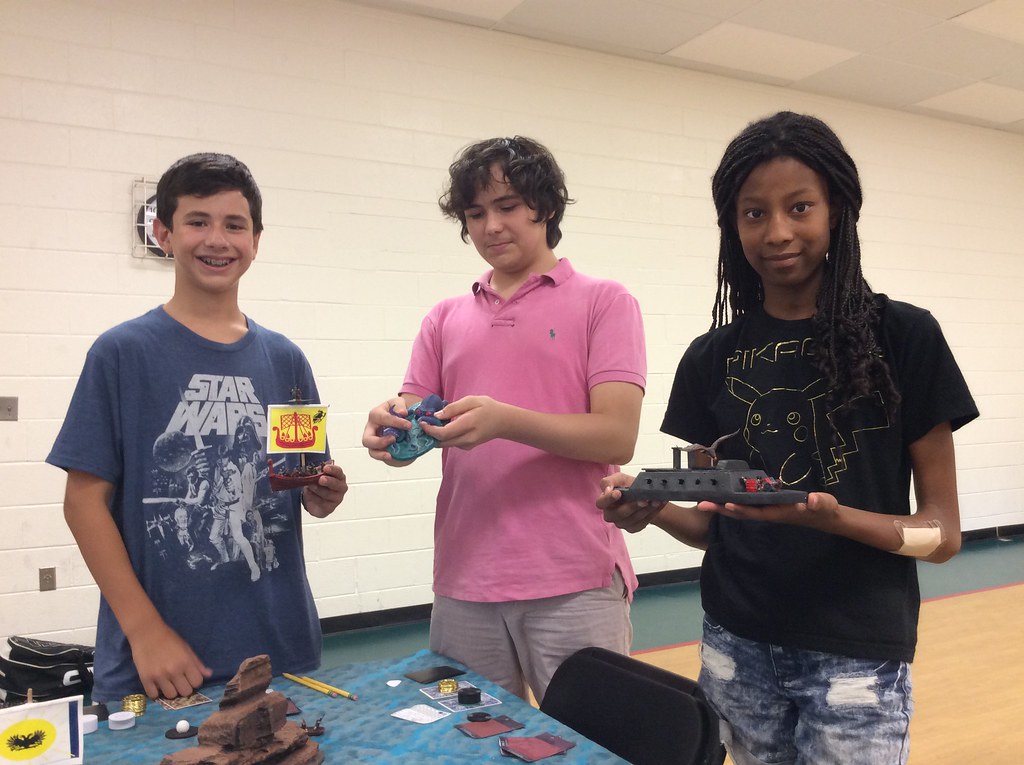 Hail to the victors.. until the next time!