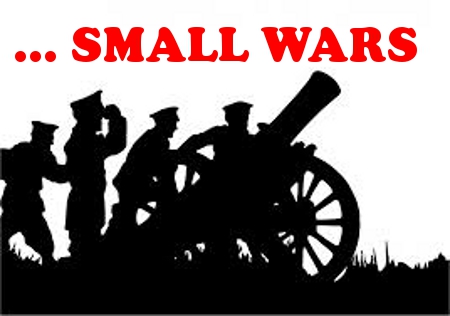 As I reported in the last AAR on Cold Wars 2016I did hit up the dealer’s area and found a vendor selling off pieces to older games. I’m kind of still kicking myself for not buying up all of their old Heritage John Carter, Warlord of Mars stuff (and they had a lot of it), but those figures were kind of crappy looking even back then when they were new. I just know they would end up in a shoebox somewhere if I dropped a lot of cash on them, never painted, gathering dust. One purchase I have an immediate need for, kind of, is in scale drivers for open topped matchbox and hot wheels style diecast vehicles in more or less 1:64 scale. I’ve posted on other company’s products in this blog a few times about add on parts from Stan Johansen, Brigade Games and Ramshackle Games, even a few Aberrant scale items. One thing I didn’t think I’d ever post on would be in scale items from GW’s old Dark Future road combat game. If you aren’t familiar with the game it’s basically a circa-1998 standalone from GW, back when they were going gangbusters with standalone games and doing great things. I think Dark Future was heavily influenced by the success of Car Wars and related materials coming out of Steve Jackson Games back in those days– the premise is awfully similar but instead of cardboard cutouts, you got the full up Citadel-era GW miniatures treatment. The original board game came with adjustable cars and motorcycle tokens, and I think you could get accessory packs for pimping up Matchbox style diecasts in 1:64 scale. I found two bags of the accessory parts and two bags of the original motorcycle tokens.

I have tons of motorcyclists from Aberrant, Stan Johansen and Ramshackle games, but there’s always room for a few more. These were injection molded plastic parts mad in the 80s, so the scale is a bit “chunky” and the detail not quite up to metal (or even resin). However, they are quite durable and impart a sense of action. I wish there were more than one pose but I see these as being eminently modifiable. I could easily add a shotgun to the driver’s left hand in this pose and maybe even mount a heavier weapon on the motorcycle faring. Or a mine dropper in the back! 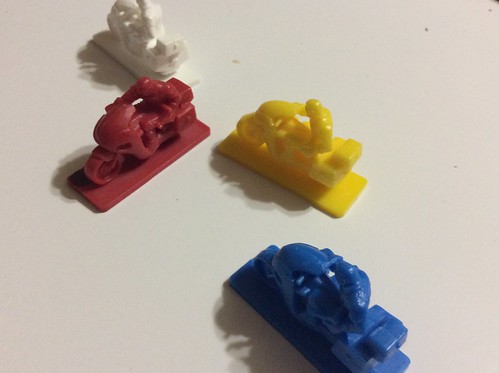 Remember, these were board game pieces, of sorts. They weren’t produced as individual figures. 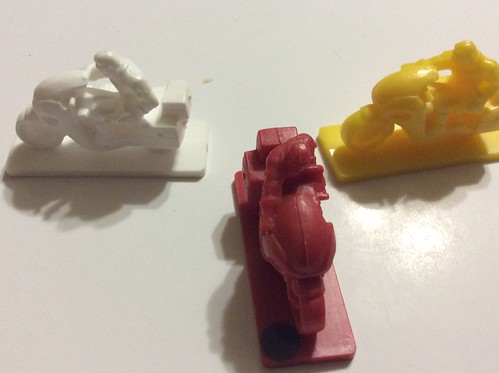 I’m more excited about these than the cycles. This is a big group of cast metal accessory parts that might have been sold separately, I don’t know what was in the DF main box. Most of the drivers are cast exactly the same with a head variation of Garrison Cap (like a police officer), billed hat (ball cap style), bare headed, female headed. More importantly they really look like they could fit in a lot of my open topped vehicles. I like to put crew in them if I can. 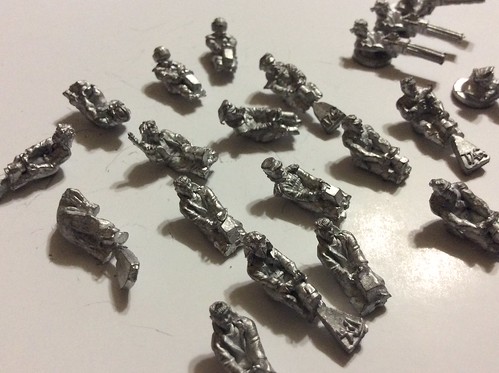 Gunners are fewer in number than drivers, but they appear to all be useful. most have a minigun attached to the figure. 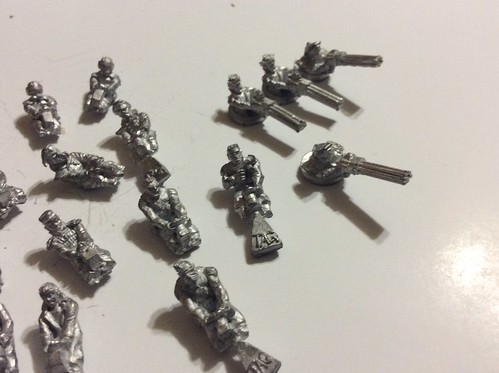 So there you have it, I’ll post these incorporated into conversion as soon as they are ready.