I’ve mentioned the Matakishi’s Tea House website on this blog in the past (2009).  Paul Ward’s site is full of rich and fun game-centric content, and it’s a pleasant diversion to while away some hours there, seeing what Paul’s latest project is.  What I haven’t really explored (much) was the fact that Matakishi is also a web store for some of the systems, terrain bits and miniatures that have been developed for games over the years.

One of these is CROM.  Available as a PDF, which I just purchased recently.  CROM has been out since 2014 as a commercial PDF, but I just got the hankering to give it a look. 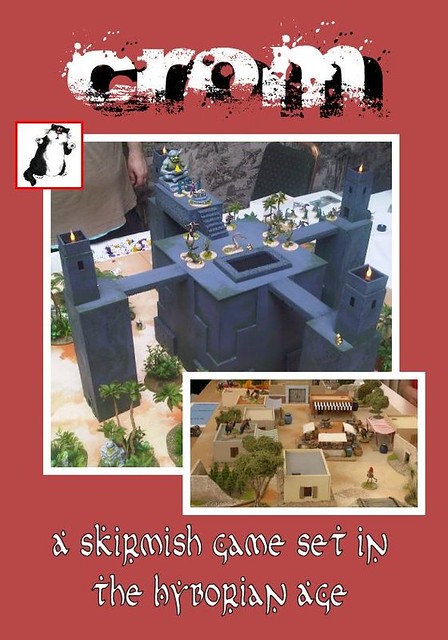 If you grew up in my era, you recognize “Hyboria”, the fantasy epoch created by Robert Ervine Howard, creator of Conan the Barbarian and other characters.  Hyboria is a setting for a lot of stories by Howard and he put a a lot of work into creating a consistent history and landscape to play in.  I grew up reading of Lankhmar, Melnibone and Hyborea just as much as I read of Middle Earth, and it always seemed to me that RPGs of that earlier era were kind of tame due to their adherence to a Tolkien-inspired artificial mythology.  Don’t get me wrong, I loved Tolkien, but it just comes off as an incredibly clean cut world when compared to Leiber, Moorcock and especially Howard.   Howard’s Hyborea was savage, sophisticated, full of petty little city-states and kingdoms, sorcerers and warriors, barbarians and beautiful babes, mystical temples, forgotten ruins, powerful artifacts of bygone ages, deadly beasts, serpent cults, dread sinful cities with rights that are not recorded, etc.etc. etc.  It’s a wonderful milieu to play around in (see for yourself).  There have been role-playing games and miniature wargames set in this universe over the years, now and then.  I liked Royal Armies of The Hyborean Age back in the day, and
Astonishing Swordsmen & Sorcerers of Hyperborea looks like a nice heaping helping of Hyborean good times, as well.  The thing is, I don’t regularly roleplay any more (though I’m getting the jones to do so again).  I would like to play an army level game, such as Royal Armies of the Hyborean Age is good for.  However, I don’t have large quantities of fantasy miniatures any more.  I really like to run smaller skirmish level games by preference, with low figure counts and smaller table requirements.  This is where CROM comes in handy.

Crom is billed as a skirmish game set in the Hyborian Age*.  It can be played multiplayer, two player, even solo.  The emphasis is on small conflicts set in the game setting, with lower figure counts.  Table space is really only about a meter square, so playing session act out scenes in a connecting narrative (or standalone).    The initiative is card driven by a deck of action cards.  Conflict is resolved in a  unique dice pool resolution mechanic.

The basic game mechanic in CROM is the dice pool. Each player will have a number of dice for each character or group of minions which they allocate between three action pools depending on what they want the character or minions to do during their go.
The action pools that dice can be allocated to are: Movement, Combat, Special. Dice may be rolled and totalled or they may be ‘burned’. A burned dice is counted as a six but removed permanently form a character’s pool.

A character’s dice pool represents their hit points, more or less, specifically their strength and endurance. As a character loses dice either from exertion (burning them) or combat (being hit in combat removes dice) they are able to attempt fewer actions as they weaken and tire.  Eventually, if they lose all their dice, they become unconscious, exhausted or even dead depending on circumstances. In any event they are out of the game. 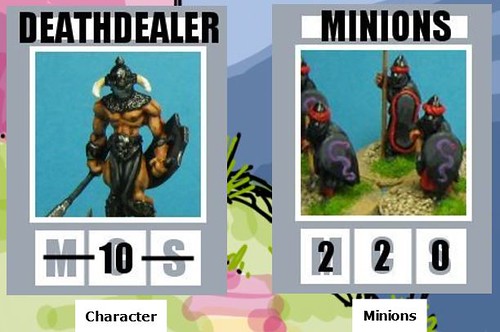 example of action cards for a Character and Minions.

As in GASLIGHT, players play a combination of heroic level “main” characters who have 12 dice to use in the three categories, regular characters, who are formidable foes and allies with 10 dice to place in categories and minions, who are variable depending upon scenario.  Minions are like “central casting thugs”.   The Heroic level characters are, essentially, YOU.. they have more dice to commit to more actions (and keep them alive longer) then other characters or minions.

Initiative order is determined by card draw.  The action cards you see in the illustration above, plus others.  Each character or group of minions should have a card prepared for them and these will make up the game deck.  Any reinforcements or summoned creatures that arrive after the start of the game should have their cards added to the deck for the turn after they appear. Cards are shuffled and placed face down in a stack. The top card is turned face up and that character takes their turn. Once they’re done the next card is turned and so on until the deck is exhausted when the turn ends.

Characters will then allocate their dice to their dice pools and the cards are shuffled ready for the next turn.  If a player really, really needs to have his character act first,  they can allocate dice from their special dice pool to initiative.  Before the top card in the initiative deck is turned face up any characters that have allocated dice to initiative roll them and compare totals.  Only characters can do this, minions may not spend dice on initiative.
Characters will act in order starting with whoever got the highest total and working down, ties must be re-rolled.

Combat is interesting.  Remember those dice pools I just told you about?    They are allocated to a character’s combat pool  to either attack or defend with. To attack an opponent the character announces how many dice they will use from those available and the opponent announces how many to use in defense. The dice are then rolled and totals compared with the higher total succeeding.  A successful attack roll inflicts two hits plus one extra hit for every six rolled A successful defense roll inflicts one hit plus one extra hit for every six rolled. If you don’t beat you opponent either in attack or defence the sixes you rolled, if any, are not counted for hits. Only the winner of the roll inflicts damage.
Combat rolls that tie are decided in favor of the attacker.

Magic would be a natural for a setting like Hyboria, but it clearly isn’t the focus of the game.  There are two types of magic in Crom: Summoning (big evil slimy things) and Controlling (the same big evil slimy things).  A wizard has to dedicate a number greater than the summoned creature’s strength total to make it appear.  This often drains the sorcerer down to almost nothing, which leaves him in a bad way to control anything, which also requires dice.  The Sorcerer handles this problem with his natural recuperative power of getting a dice back periodically, so he can actually summon a creature over a long time period and have some left to control, or use minion junior sorcerers for the summoning and control the critter afterward.  There are also smaller magic applications that are handled as “special actions”- magical attacks and spells like Fire Attack, Defend, Heal, etc.

Summary: I admit, I haven’t had any opportunity to give CROM a try yet (call this a first look rather than an honest review)– I’m kind of embarrassed to admit I don’t have a lot of 28mm fantasy figures left over from the old D&D days.  I am inclined to get some, as I think this could be a lot of fun– Crom has a small footprint, not a huge buy in, and the author clearly is supporting it with a lot of creative effort on his website.  I was a little stuck on where to get miniatures with a specific Hyperborean aesthetic — miniatures that looked like Frazetta covers were a lot more common when I was 17.  Fortunately, the author covers that on this sources page.   The Conan Hub is worth a visit.  Paul posts scenarios, card templates, and all kinds of supporting material for the game.  I think CROM is worth a look and definitely tickles my nostalgic itch for the kind of game I played when I was much younger.

CROM can be picked up at the publishers site, or at DriveThruRPG.

* Don’t pin me down on the consistency of spelling the word “Hyborea”.. I’ve seen Hyborean and Hyborian, depending on who is quoting it.