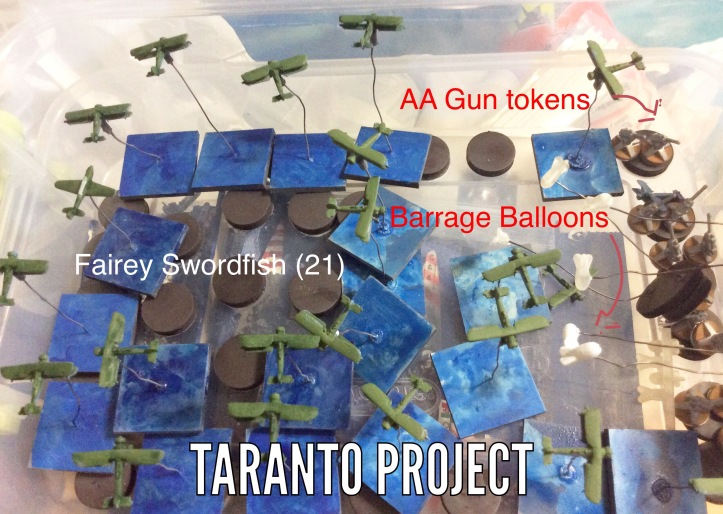 23 Pico Armor Fairey Swordfish models are assembled, painted (rudimentary style) and 21 are even mounted on bases precariously on wires.  I will bump the final count up to 24 so I can have 8 teams of 3 in the final game.  21 flew the historical mission in two waves.  I will have the real pilots names on all the bases (and 3 fictional pilots).  I have 8 Fulmar aircraft, only 1 of which is shown above.  Records indicated Fulmars flew as combat escorts, I’m not sure how I will include them.  It might be fun to have a range of hypotheticals included on the Italian side, including possible support from the Regio Aeronautica.  I’ve ordered some period Italian planes to cause havoc in the future.  i need to touch up the paint jobs, add some detailing and decals, and they are finished.

I’ve got barrage balloons in various stages of completion, these proved to be easy, but I’ll need another order of them.  I have 10 AA tokens painted up, and I just got ten more on EBay.  I’m going with an zone style approach to anti-aircraft fire.  The Italian response was vigorous but inaccurate historically.  The ships all had various AA factors and it seems to be clear that they participated in defensive fire as well as gun emplacements.  I might nominate an AA gun range and give each ship a choice of which plane to target per turn, and that plane gets another AA roll against it.

The fleet is done– painted, based and labeled with names.

Next step is to figure out terrain.