Game Camp 2015 Day 1: The Magi and the Opening festivities

As I do this time of year, I run a gaming camp for kids at St. Stephen’s and St. Ambrose schools, Alexandria VA. This is primarily a miniatures-centric gaming camp with some boardgaming and miniatures painting tossed in to break it up a little. As has been my practice in the past I set up a painting table and set out my dwindling supply of plastic figures to paint, which is always a big hit.

I like to run a very simple game to start and I have run THE MAGI or FANTASY GLADIATORS for the last few years. I went for THE MAGI this year, as it is self-contained, runs in a single box and is easy to play and easy to teach. I’ve posted on the Magi before, and if you want to read up on it or download a copy yourselves, go to Digital rules for an EPUB version of the rules. MAGI is based on a very old British game called Waving Hands that was published back in the 1980s as (more or less) a parlor or party game. I have designed a card component and a miniatures element to the game, and run the game in lovely, easy to see 54mm scale.

The game takes place in a big subterranean cavern represented by a hex grid and some Dungeon Dressing bits. I’ve added lots of stuff to break up line of sight and create a little old-fashioned havoc in the game, like the Crystalline Pyramids that each have a magic power (Paralysis, Amnesia, Disease, Healing), as well as emitting a light source. The Powerful old Lich, Gordon the Enchanter, resides over the Magi Games by standing on top of a structure I basically lifted as is from a Playmobil Coliseum set, just painted.

The game takes a while to play but is well received by most players. We had a couple of players get very pouty and antsy when something didn’t go their way and refuse to play any more. It happens sometimes, although I usually associate it with younger players, not teenagers. They cheered up and got into painting figures, and we soldiered on. 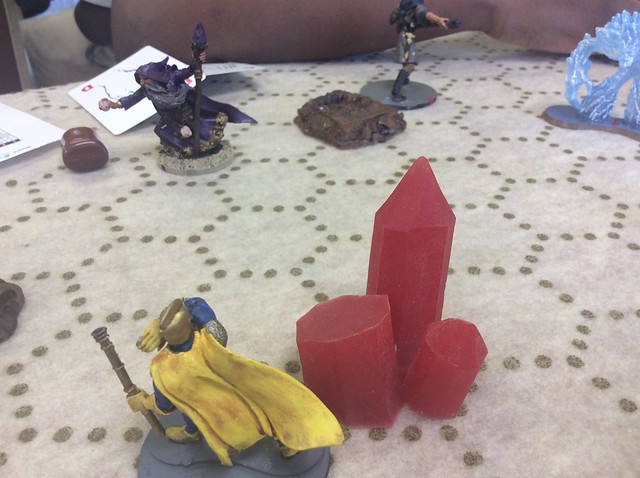 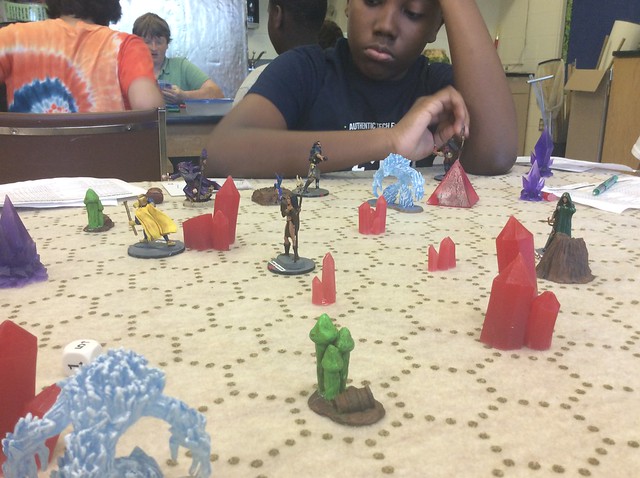 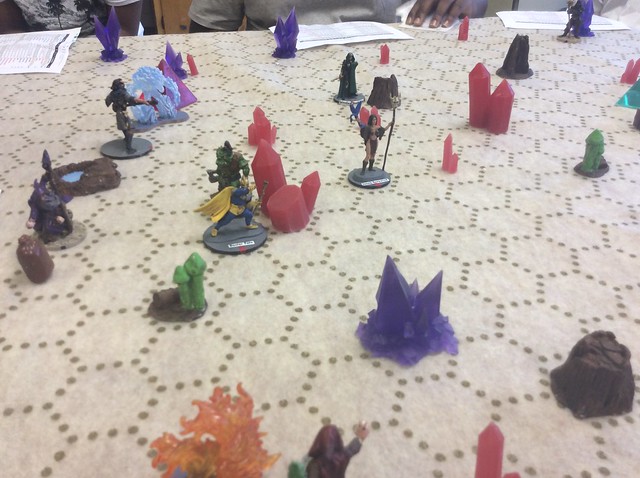 Garrett also ran GET BIT during down times, lunch time and etc.

For a slide show of all Game Camp Day 1 images, see this link here:

In summary, a pretty good day! I felt bad that I could have done more about the pouty players, not sure how though.