The Weekend: Gaming on the Mellow Side

I’ve been meaning to catch Otto Schmidt’s THE WEEKEND for a long time now. It’s been tough, as June is a busy month usually with high school age kids.  Now that one is in college and the other is in his last year, I thought I’d spread my wings a little and manage a day trip.  Background: the Weekend is held late June, and appears to be a 3 day affair, so it is about as much of a commitment as any small convention in terms of time.  As I recall, this was started by Otto Schmidt as an alternative for HISTORICON when the latter was slated to go to a much more expensive venue in Baltimore, MD (this did not transpire, for many reasons).  Otto wanted the Weekend to be a gathering of old friends who wanted to blab, gossip, game and hang out.  It is held at the Continental Inn off of Route 30 pretty much right across the street from the Lancaster Host, site of Fall-IN! and Cold Wars.

The Inn is an old building, family owned and operated.  It has seen some hard usage but is not what I would call “a dump” by any means.  The hotel has a major meeting space downstairs and other, smaller rooms here and there in the upper and lower lobby floors.  Frankly, I would have killed for a space like this back in the TriadCon days.  If we’d only known.   It’s not perfect– the handicapped facilities are about as non-existent as they are at the Host if not worse (no elevators in critical areas; no handicapped bathroom stalls) but you can always drive around back to the lower level to unload things, which is a plus.

There is a MST3K (Military Science Theater 3000) set up for this con but I wasn’t there for that.  No vendors that I could see, and a desultory bring-n-buy style flea market.  That was about the normal convention “stuff” present. 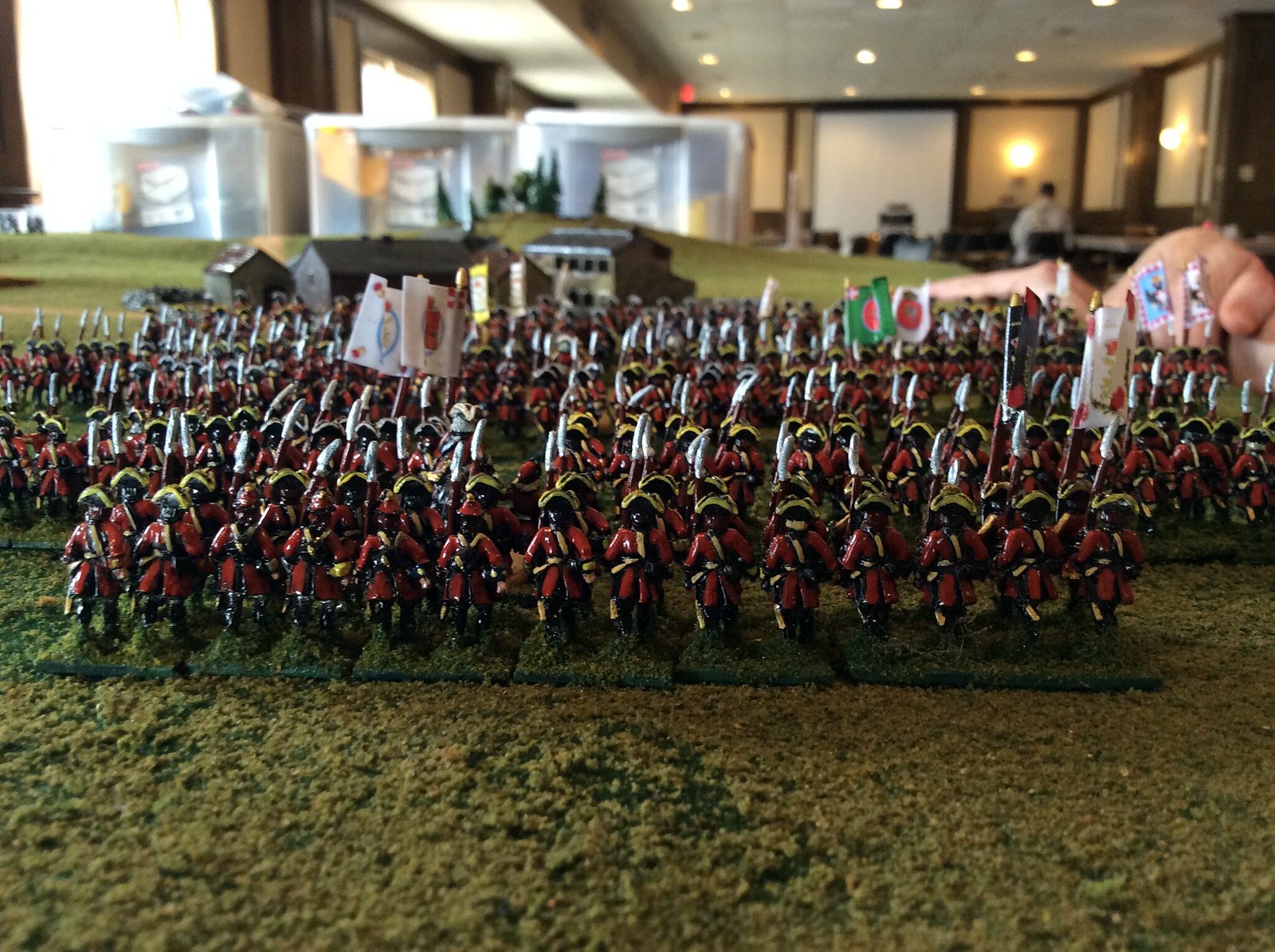 An exquisite Age of Reason battle in 15mm, created by Bill Grey, the Author of Age of Eagles. Click the picture to see more.

I got there a little after noon (due to traffic and helping get my son ready for camp).  Literally, I spent much of my time there BSing and catching up with friends, so I’d say Otto’s goals for this convention are certainly being met.  It was great seeing many people I haven’t seen in a month of Sundays, including Dennis Largess, Rich Low, Andy Turlington, Bill Grey, Bob Leibl, Cleo Hanlon, and Pete Frechtling.  And Otto of course, but I talk to him on the phone frequently. 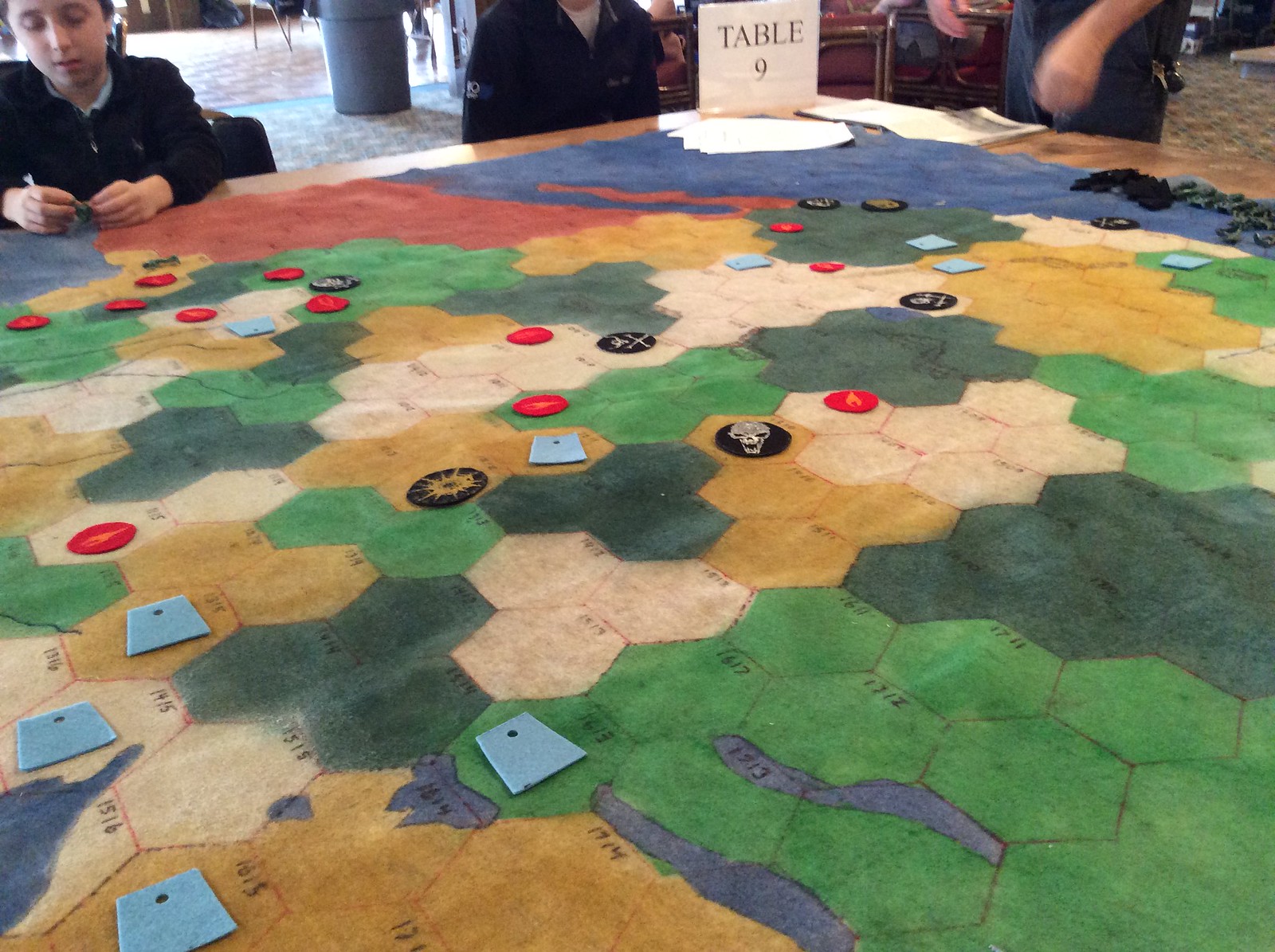 Mr. Tracy Johnson ran AFTER THE HOLOCAUST, the old rare SPI game on a giant splodey map with army men. It had a great look to it. For other pictures, click on the picture above

When I got there there was an ACW game going on in the corner, and two being set up, an AFTER THE HOLOCAUST (SPI) game being rendered in miniature form by Tracy Johnson, a two player game set in 1714 being run by Bill Gray,  and an I Leonardo game run by Pete Frechtling.

I definitely wanted to play the I Leonardo game, by temperament and experience.  I’ve played in Pete Frechtling’s skewed version of the Italian Wars (with Leonardo Da Vinci tanks, helicopters, gliders and etc.).  So with your kind forbearance, I will sketch things out as best I can, providing something of an “After the Battle” report of sorts. 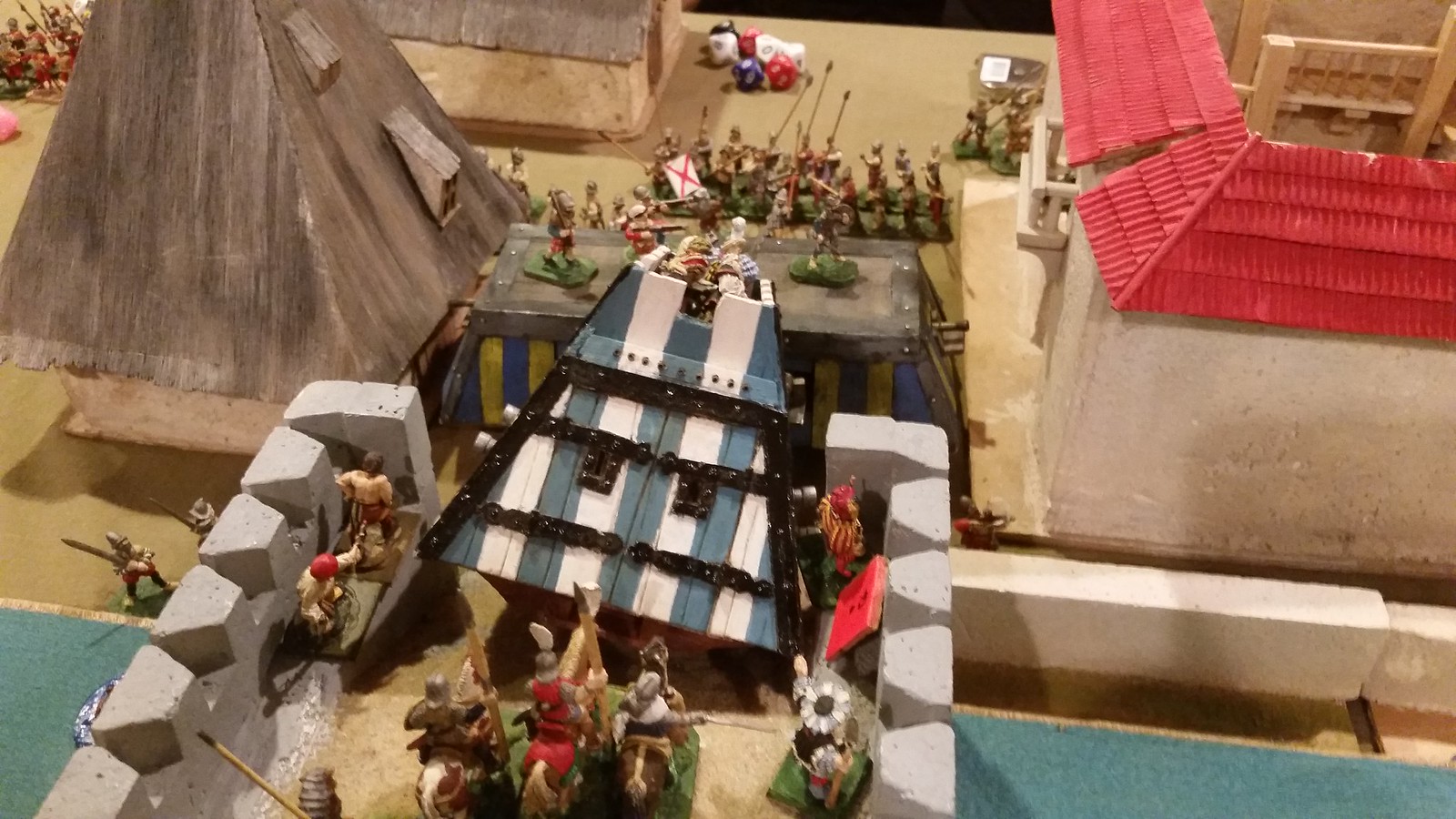 The basic set up was the Imperials holding a bastion with supplies on one side of a canal that opened up into a river.  There was only one established bridge over the river (made of stone) and it was being defended by a force of two commands of Imperials, with two Leonardo style tanks each (not the conical tanks, the flat ones).  The Imperials also had a ship loaded with mixed troops and cannon to defend the water entrance with.   On the far side of the canal were the Allies– British (red striped tank), Swiss (green striped tank) and French (blue striped tank).  Each Ally had one “castle” style Leonardo tank, painted as I have noted, plus a wild mixture of artillery, infantry and a little cavalry.  I took the French (blue striped) command on the far right of the line.  I had the tank as mentioned, a grenadier, Leonardo himself, some engineers, some cavalry units, some foot knights, and a bridging unit (important!).   The Swiss to my left were in the center.  They had more artillery than I and some ruins to hide in.  They kept a hot fire going against the forces that would venture clear enough to be shot at in the center of the line opposite us.  At the far left was the British and the Allies’ two ships.  The ships also (important!) had a bridging unit.   The idea being they would sail into the canal, beach, and construct the bridge from their ship to the opposing side. 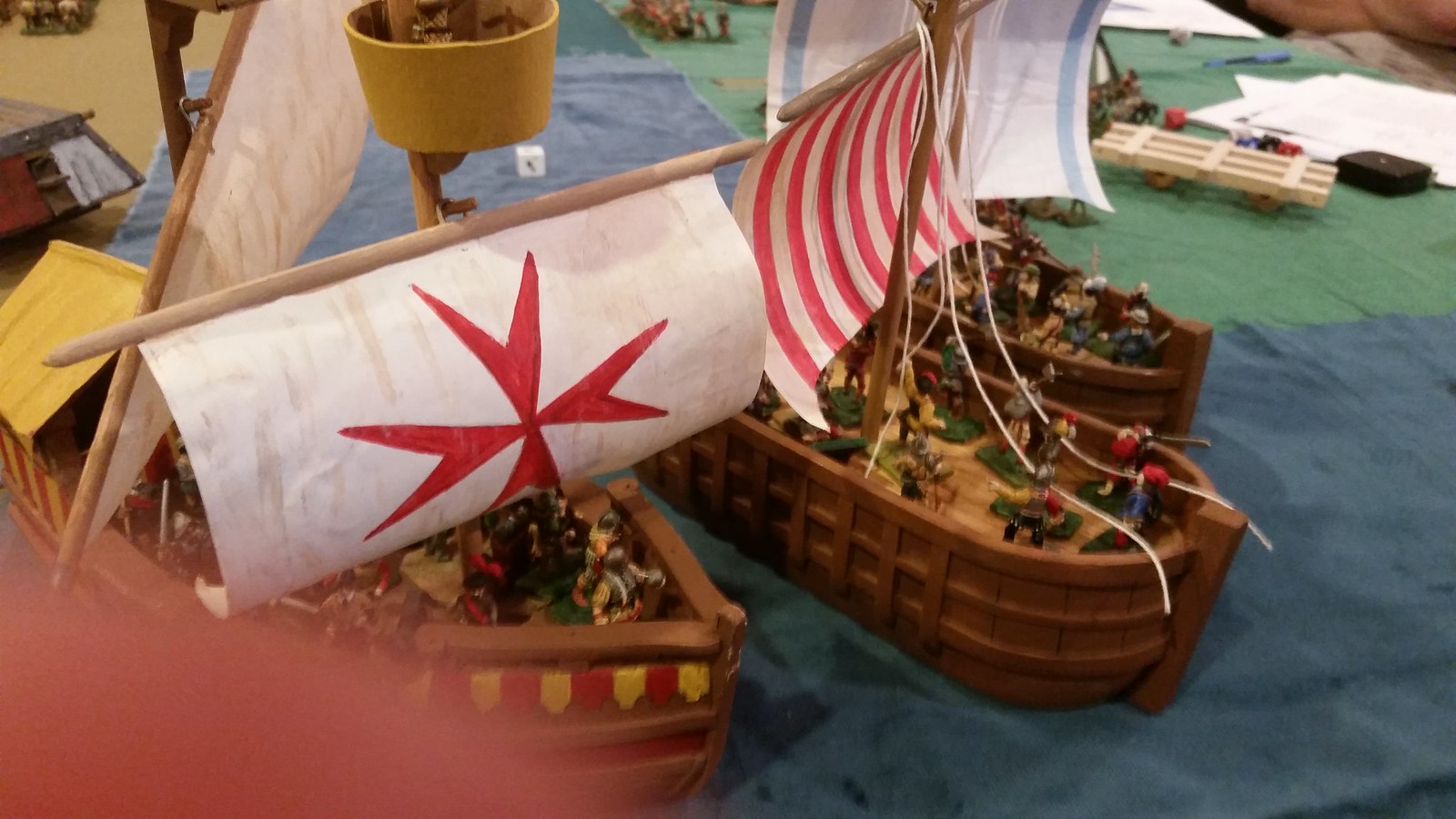 I didn’t spend a lot of time tracking the naval conflict, but it was protracted and savage.

The English engaged such targets of opportunity as were available across the canal.  With the canal there to impede movement the battle became kind of a long ranged slugging match over the canal as both sides attempted to bombard each other.  The big guns on the Imperial side were their two flat rectangular tanks, and a flame thrower style vehicle that was somewhat hindered by being in the midst of a pack of infantry.

We were in a stalemate for the first few turns.. The French being the closest to the existing bridge (played by your humble correspondent) we were going to have to swarm over it somehow and take the bridge.. Unfortunately the Imperials had placed one of their two precious tanks to cover that very narrow defile, and they were aggressively defending with everything at their disposal, including a land rocket that misfired and went fizzing off in a random direction (panicking my troops but causing no damage).   My plan was to make a big demonstration and hoo-hah at the center bridge and focus the defenders there, while building my bridge train on the far right of the battlefield. 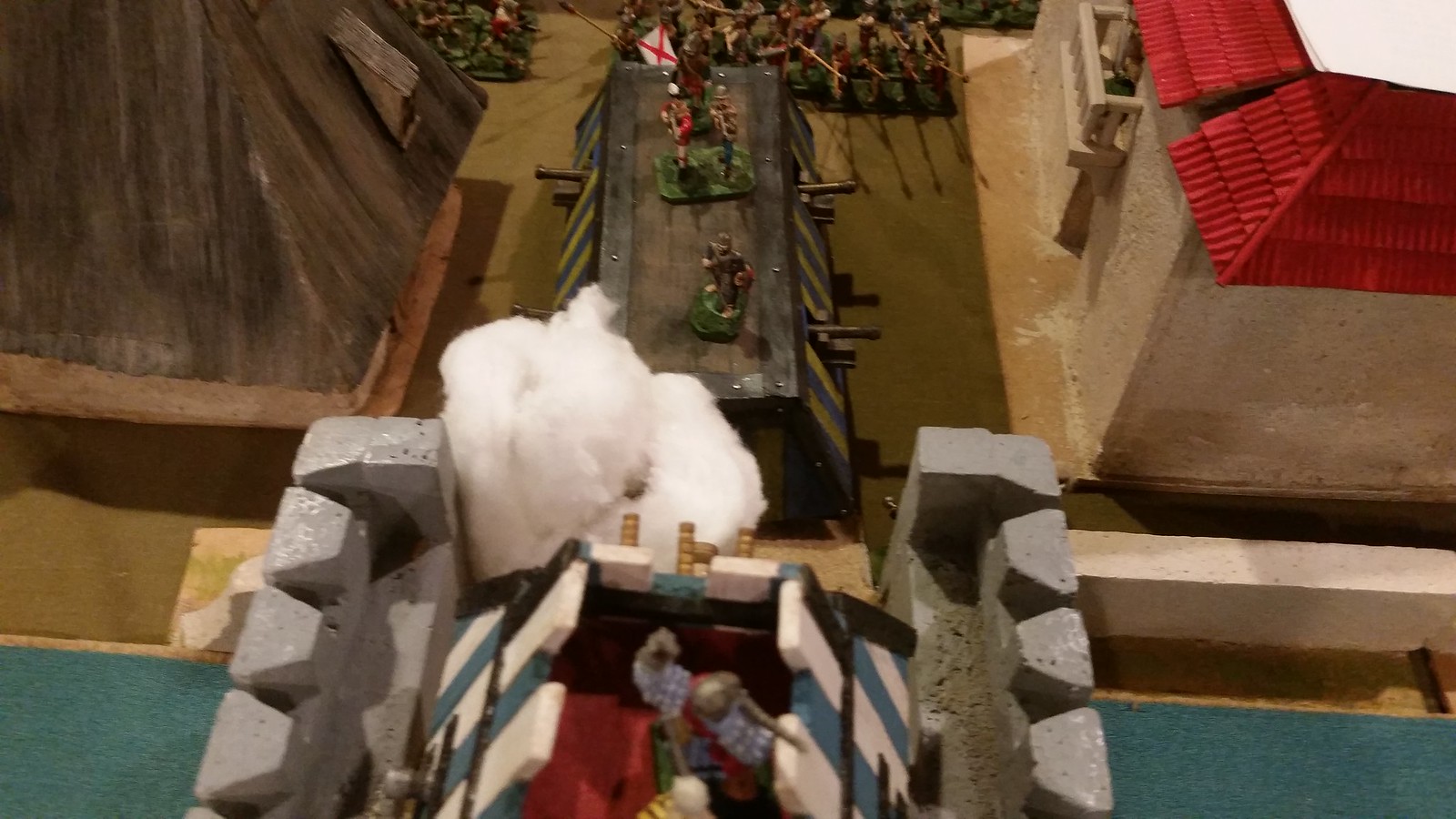 The Swiss did their best to support me, and were game to swarm over the center bridge as well, but we had to move the vehicles out of the way to accomplish this.  They had the advantage of some ruins to disperse into and set up artillery and other fun Leonardo style weapons (including a machine gun) to plaster the Imperial bridge defenders with.  I had a single artillery piece on my front which did some service fighting the opposing tank unit.  About midway through the game I steamed over the bridge and tried for a ram on the opposing tank.  Yes, I know this sounds decidedly risky but sometimes  you have to push things to win things.  The ram did not accomplish much, nor did the follow on fire into his sides at point blank range.  It wasn’t a bad idea, really, I just rolled pretty badly throughout the game.  I followed it up with a fusilade of infantry attacks which DID cause problems… the French grenadier tossed a grenade into the mix and it actually exploded more or less correctly, starting a fire and killing several of the crew. 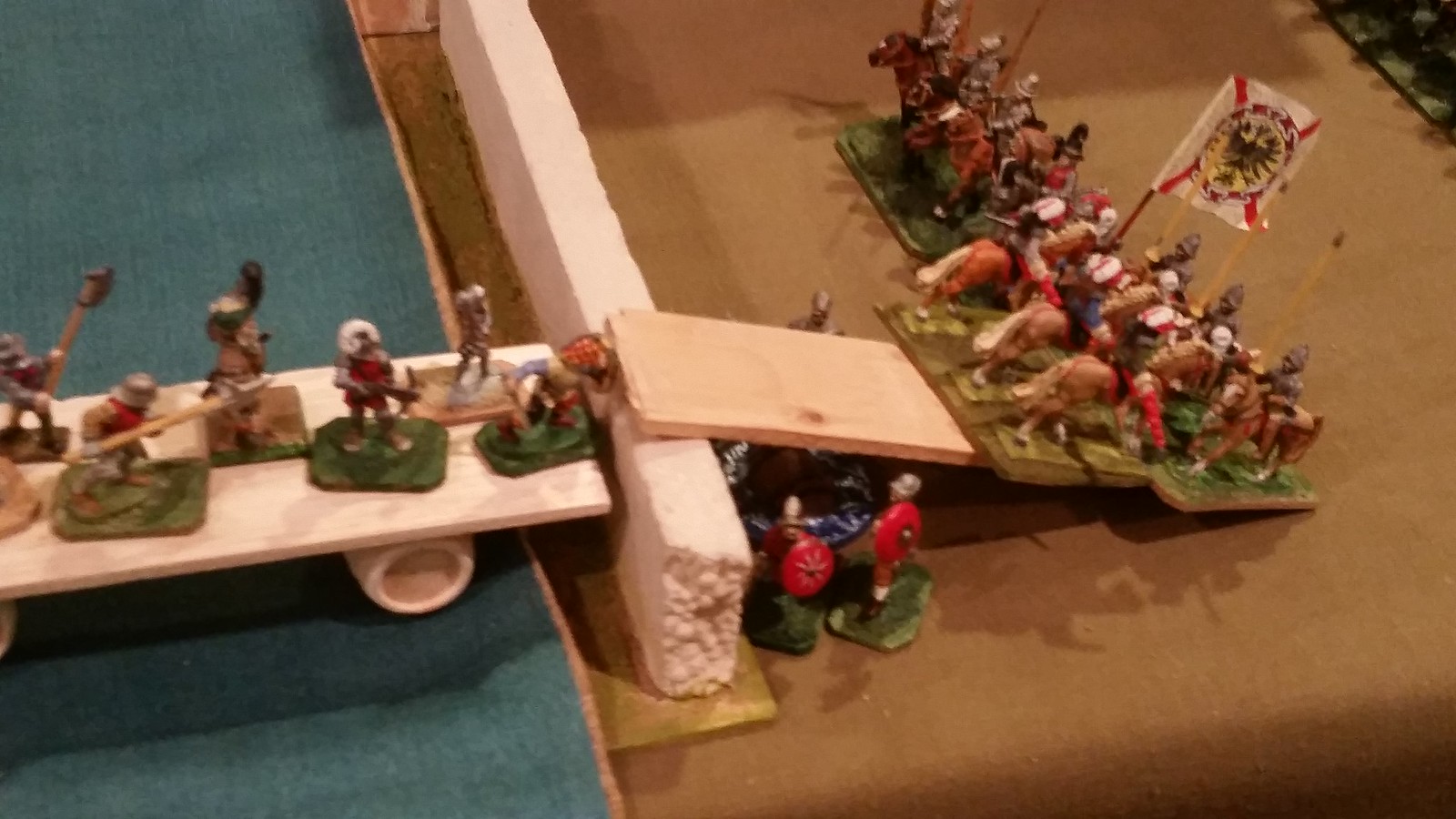 Meanwhile the bridge building gang on the right had succeeded at their task and the first independent bridgehead over the canal had happened.  The opposing player realized this and moved half-armored knights into the gap to engage with me.   On the left, the Imperials attempted to move all their infantry down the road, lost their general to gunfire, and moved their secret weapons out to engage the Allied Ships, which had bested the Imperial and were heading up the channel.  The flaming water borne holocaust the Imperial player was loudly fantasizing over (repeatedly) did not transpire, and thus the left flank was able to create a bridgehead over the canal as well. 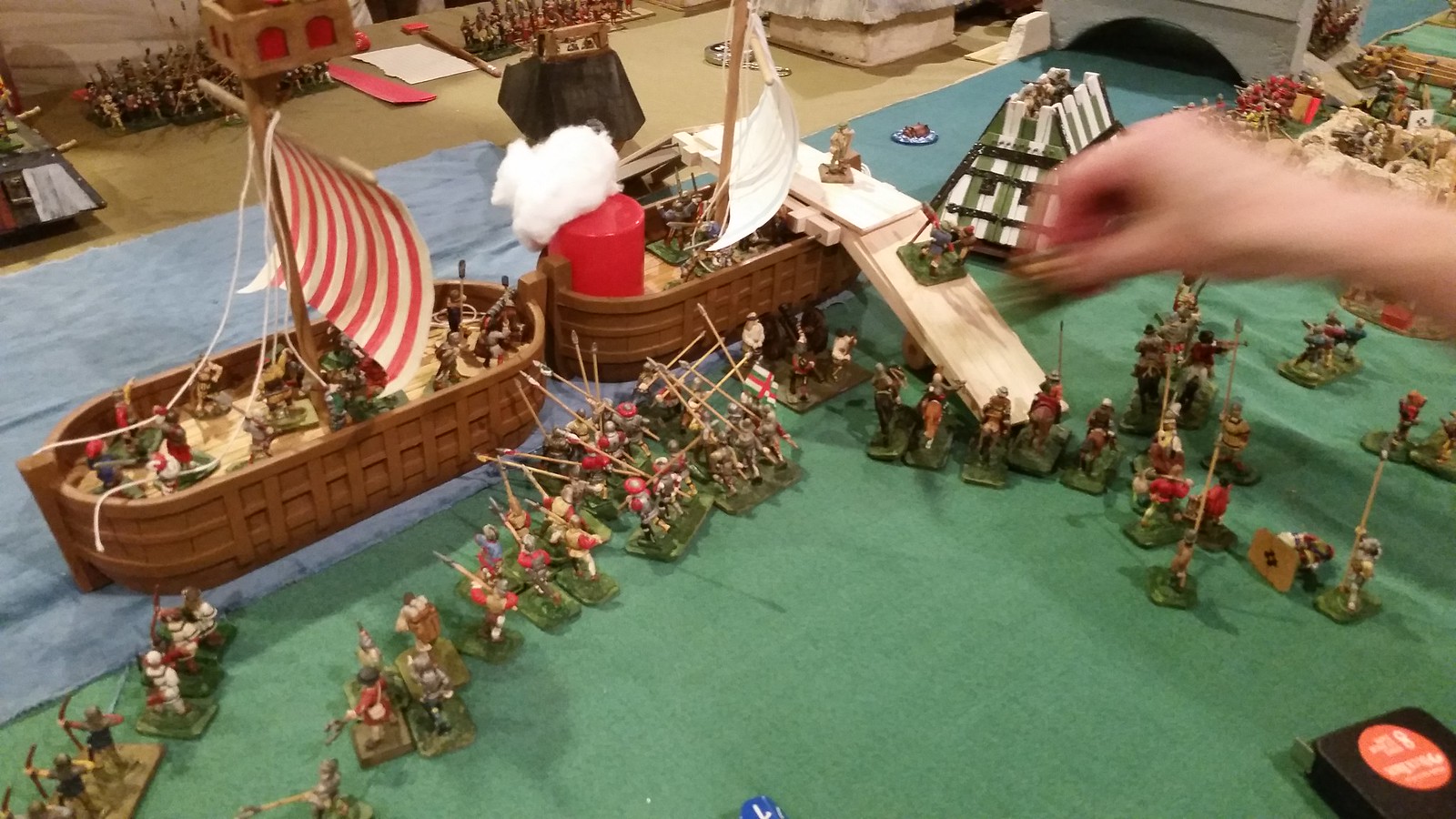 Although we were slated to play until 10PM, I was being frantically called from the home front, over a matter of shoes for my son’s camp.  Timing came together wonderfully, as Peter declared the game a victory for the Allies at the end of the turn where the second bridgehead had taken place.  This makes sense.  Although the center bridge was very much in dispute, I could still push men over the the entangled two tanks and even though the defenders had a larger group of infantry there, it was so narrow between the buildings he would never have the chance to use them effectively.  I actually welcomed such a push of the pike.    The much referenced “secret weapon” (flamethrower) amounted to almost nothing and the two Imperial tanks were heavily damaged.  The French tank (mine) had suffered damage but was still firing and reloading.  I was expecting casualties on the right flank as our crossing attempts had triggered some ambuscades from hidden troops.  Still, I could see the tide of battle was changing rapidly in our favor, and who was I to contest the GM’s view of things, anyway?  My thoughts on the I, Leonardo game system was that it seems remarkably bloodless.  Most of the Imperial arsenal was taking a heavy pound throughout the game and we really didn’t kill much of anything– we disabled a lot, and killed some crews.. but that’s about it.  I would like to redo the charts to this one some day.. just pondering.  I like the system itself just fine, but it’s really for a history geek audience who pretty much know the subject already.

For an amusing SLIDESHOW of the I LEONARDO BATTLE, click here.

As mentioned, I had to depart earlier than planned to solve a problem at home but I was glad I had an opportunity (at long last) to visit THE WEEKEND.