Hey HMGS Convention Attendees, we have a MAJOR Guidebook Update for you. 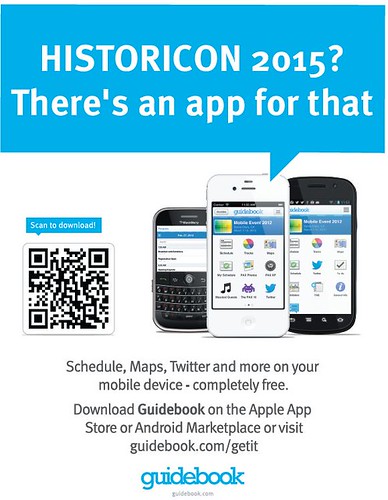 Hey Historicon! There’s an app for that!

First of all, I tried floating events early without room numbers.  That was a bad idea, as updating them (later) WITH the numbers nuked most of what I had done before, causing me to reenter data for tournaments and seminars!  Woo hoo! I love entering data twice.

So I’m making a business decision– we don’t post events (that is, regular games) until the events guy irons out what the table numbers are and where they are at.. it’s too painful to bounce back if the earlier input crashes on you.  If that means we post Guidebook a little closer to the event, so be it.

So, what do we have?

What am I missing?  The map of the Exhibitor Hall and Exhibitor List.

And then we will be done, unless we get new games between now and the convention itself.

How to get it

Go to the Guidebook Landing Page which is HERE and follow directions.

To Preview the Guide

Go to the Preview Page which is here

New feature: I thought I’d do an actual count by period.  The reality of Non-Historical versus Historical by counting the actual numbers, not by hand waving*: 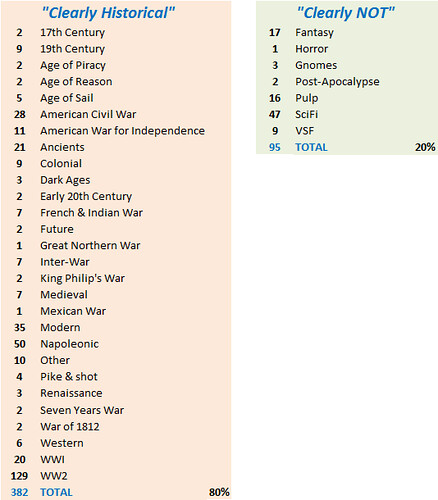 So the reality is 20% non-historical games at Historicon.  And I’m grouping in anything that could remotely be considered fantasy and SF together.  There are the numbers.

Events by Rules mentioned in PEL 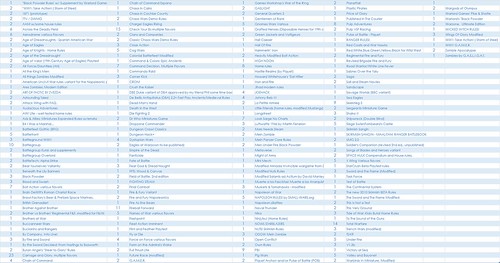 You may have to click to see original size. There were a lot of rule sets.

This was all over the map.. there were a lot of rule sets being used.  Where it was possible I combined version and flavors and variants into the parent.

In any event, there’s the true facts, and a big, big, big guidebook update.  See you at HISTORICON 2015.

* Note on the period count above– it excludes all tournaments, which probably should be entered under fantasy in some respects.  Did I say that out loud?  I’m trying not to snark…