I was given the opportunity to play and review the recent game from the Battle Factory, called “Wars and Battles”.  The core of Wars and Battles is a hex based battle game with an old school look to it, set in a very narrowly defined battlefield in linked campaign.  Battles are launched from a standard interface that should be able to host future campaigns from other eras. 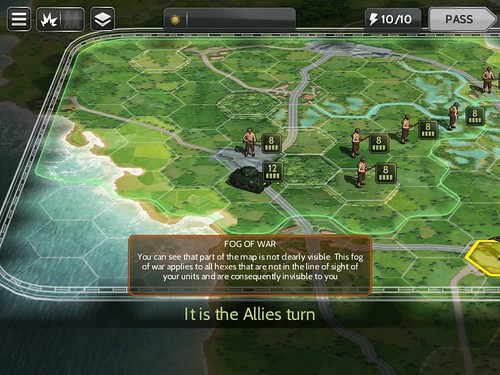 Kermorio is gambling on a standard interface approach, somewhat modular with unit icons OR 2D pieces being the default view.  These are played on a standard 22 hex map with variable terrain features whose cumulative effect is usually reduction of movement or influencing combat or line of sight. 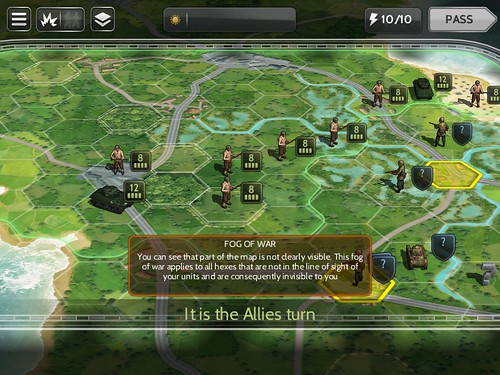 In game touch tip and tutorial help is very good, as you can see above.

A Campaign is essentially a linked progression of battle scenarios played out on these 22 hex battle maps.  Campaigns are in game purchases, with the base game being 6.99, and at time of writing, the Normandy Campaign in WW2 is available for additional charge beyond the default basic game.

Having played through the Normandie (sic) campaign, I would recommend this IGP.  Historical material is very well done and it’s clear research went into this game– each unit has a background piece and it’s more than a drag and click interface.  The historical campaign follows Normandy closely and I had no complaints based on what I know about the campaign from a historical viewpoint, which is a decent familiarity.    Campaign missions follow a progression from Easy to Very Hard, and you are debriefed for success or failure at the end of each one. 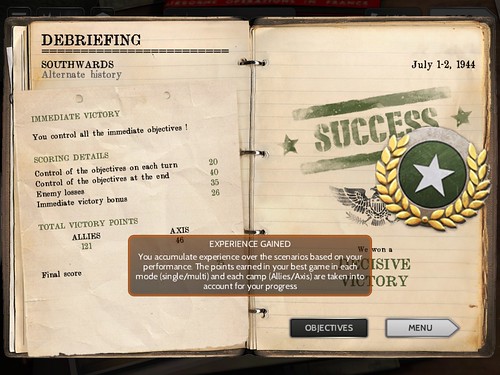 Mission Debrief, end of every scenario

I’m not sure if the map sizes will expand beyond the 22 hex per screen standard or the approach will be to stay modular.   I can see the benefits of a modular system when 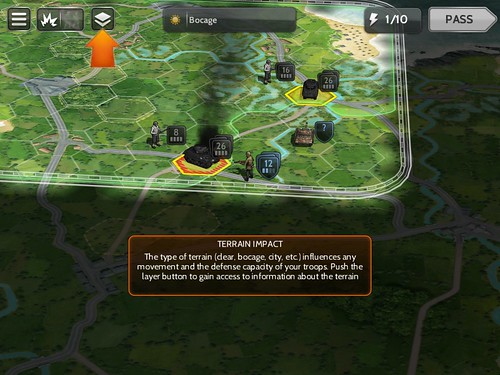 More of the Wars and Battles in tutorial mode

Artificial Intelligence in this game is decent to moderate and the decisions being made were okay, though predictable at times.   I found it to be overly defensive and not as aggressive as it could have been, but if you factor in that Normandy actually is a defensive campaign for the Germans I guess that makes sense.  The campaign structure is logical and sensible.  Players will accrue experience over time and replacement units to fill in for casualties.  In this respect I was reminded, strongly, of several other games I’ve played in the last year that use a similar progressive campaign structure– in particular and variation of Panzer General or its various incarnations over time, or near-knockoffs.  That’s neither here nor there– a campaign really needs some form of structure or it is difficult to execute, and the PG template works as well as anything.

The modular “game engine” approach is somewhat new for wargames on the IOS.  Kermorio has high hopes of porting the same approach to many different battles, including Napoleonic or ACW era battles.  I remain unconvinced the scales of those two eras will work in this engine, but I’d be willing to give them a try.

In Summary, Kermorio has had a very decent first outing with WARS AND BATTLES– which is a mix of old and new ideas that will appeal to hard core wargamers and newcomers alike.  For 6.99 plus a pittance for the IGPs, I certainly think there is plenty of value for the retail price.