I’ve often thought how great it would be to play Cosmic Encounter, my favorite game ever, on the Ipad.  It would seem like a daunting task, so many of the Alien card powers would need to interact with each other seamlessly– I couldn’t see an artificial intelligence Cosmic Encounter player as being an easy task to program.

What might be possible, I’m guessing, would be a program to facilitate a “game in real time” app for remote games, or a helper app for asynchronous play.  Sort of like a VASSAL for only Cosmic. It would appear some level of this wish is in the process of being granted (with some help from a lot of Kickstarter backers). Or might be. I’m an eternal optimist.

Cosmic Connector is, in the words of Peter Olotka, a ‘connector app’ that he would like to get financed.  It will connect remote players of the game Cosmic Encounter:

“Our vision for the Connector App

We want to replicate the social experience and fun of playing a physical board game in a digital game environment optimized first for mobile touchscreen devices and then for desktops. This is different from a digital version of a board game focused on game mechanics and special effects. The Connector is focused on you as a player and on enhancing your experience of interacting with other players. Everybody will be able to talk to each other and have everything they need to play Cosmic Encounter, right at their fingertips. Connect, talk and play!”  — from the Kickstarter Page

Now, that’s market-speak to be sure, but what I’m seeing in the mockups and in the video is a real time or asynchronous PBeM game app, and that might be worth my hard earned dollars. 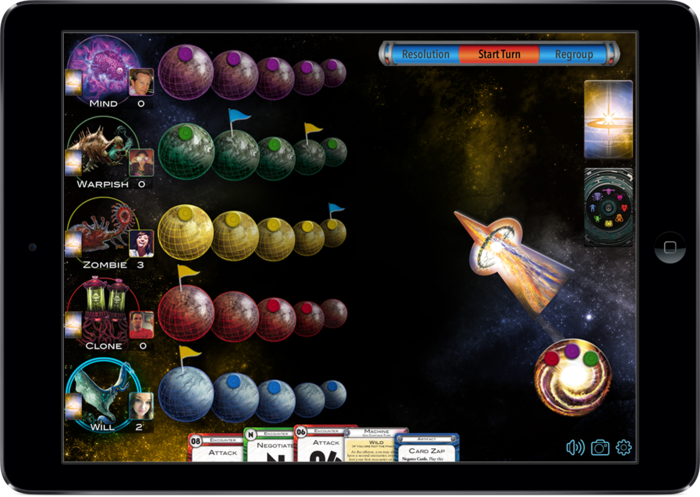 I like the notion of being able to play CE online in RT or asynchronously.  I’m not AS crazy about their pricing scheme, which appears to be– “big hunk of aliens possible at lowest level, then about 1/4 of that more at the next level.. then 1/4 more at the next level, and if you donate 1000 dollars you’ll get the whole shooting match”  If it’s an in-game purchase to get more aliens later, then say that up front in so many words.   I’m a little confused on how this is going to work.  I do know my pledge level will give me enough aliens to play with for a long time.  What’s going to happen when I encounter a player with deeper pockets than me, who wants to start a game with an alien I don’t have?  I wish that was spelled out a little bit.

Oh well, it’s Cosmic Encounter, I know the game well enough to know I’m going to have a good time with this thing.  If you’re interested, see the Kickstarter Page here. One of my fantasy matchups would be to play Tom Vasel some day in Cosmic Encounter– its’ our mutual favorite game. Perhaps .. who knows.. it will now be possible?