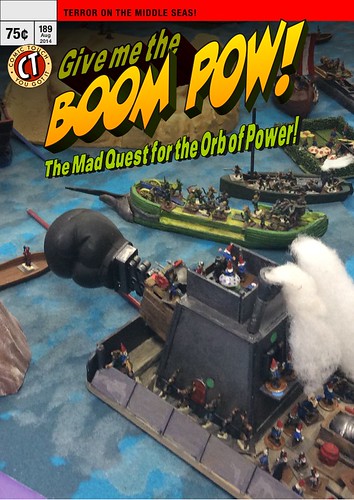 On Wednesday, we played out the rest of the Orb of Power scenario for Big Danged Boats. It was a very frenetic game, with lots of odd stuff happening that tested BDB’s boundries. Big Danged Boats is a design that’s hard not to tinker with, and I’ve been working on ways to speed it up a little. I like the combination of shooting, boarding, fighting and magic that I’ve developed so far. It’s a good mix, but I designed to build a narrative, a story, and it’s not the most speedy game ever. On the other hand, it’s a lot of laughs. What other universe has Squid Gods, Dead god’s feet, and Armored Cheeses?

The guys wanted to run it through to the finish. The idea of allying together against a third party seemed to be an anathema to some and other players took to it. One side of the board was Chaos with ships shooting at each other and backstabbing galore. The other side was like an exercise in barter economy– Reed (playing Battenburg, who had bought a ton of reinforcements) traded off Slingers for Gold, Gnomes for Gold, and generally acted like a capitalist. The Wood Elves, the Karstark Gnomes, and the Little People Brigade all acted in close concert with each other, made deals, made room for each other to pass and navigate around each other. So it all looked like they were on board with the “Fighting Gordon the Enchanter” thing.

The Seng sailed THROUGH the Dwarf ships in incorporeal state. On the other side, the Augmentation price for the spell ran out and Patrick wasn’t willing to pay any more gold to keep it alive. So the Wizard was going to go up in a nimbus of blue flame, but Patrick booted him out of the ship at the last second. “Nice job, Wiz, SEE YA!” BOOM!

The Orcish Revolutionary Council (O.R.C.) performed in revolutionary martyr spirit. They sailed right at the front door of the Tower, as if to ram. One of the Martyrs tried to ram the front door but got caught up in melee, and pulled the “Stupid” result from the Red Badge of Courage, and so ran around the tower base instead of self-immolating.. The next martyr managed to impale the aquatic mine with his pump charge, and a disastrous explosion took place.

The Alliances that were in place at the start of the game started to fall apart. The Karstark Gnomes turned on the Iron Dwarves. The Bone Brigade, which had been shot to pieces in its ill conceived attack of the previous day, scrapped with the Foot of the Dead God and the Primus, starting the day off with a nasty event card on the Cult and exploding their one and only artillery piece, which angered them to no end. Primus fought with the Bone Brigade at a distance, and he retaliated with every missile weapon he has at his disposal, wiping out most of the BB. The Bone Brigade player (Cameron) didn’t understand the impact of talking smack one turn during an ambush, and then begging for an alliance the next. The Seng managed to board and capture the Plunger, and operate it (clumsily) to spar torpedo the Blue Magoo from the Little People Brigade, doing severe damage.

The cult of F’Vah pulled out their big trump card, Summoning the Squid God, and it was hideously effective.

The Bone Brigade was a shambles– shot to pieces by the Rats and Cultists, and missing one ship to the Squid God, but they bounced back playing the Faction card: Surprise, They’re already dead! which brought back 5 skeletons to life, so at least the Deadnought fought its way clear of the mess.

And then the allies on the far end, the Rat Men and the Cultists, fell out when the Cultists turned on them like a prison punk in the showers. 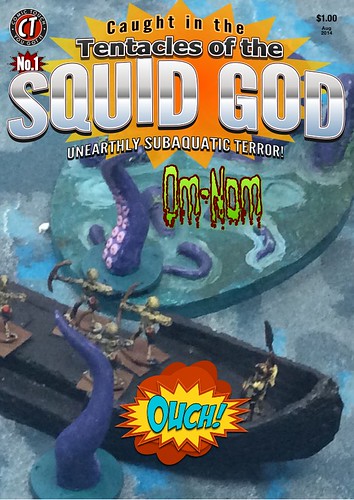 By the end of the day, the game was left still not resolved, so the fellows requested at least another session in the morning.