Tuesday was a day taken up with running the MAD QUEST FOR THE ORB OF POWER scenario again. This was the scenario I ran at HISTORICON two weeks ago, with minor changes– we introduced the Little People Flotilla in this game, as well as Aquatic Mines. 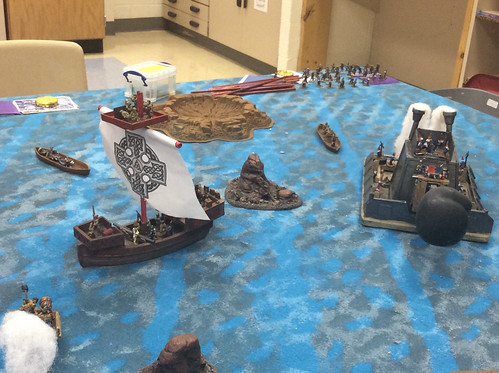 The objective of the game was the same– Gordon the Enchanter has holed up in his Wizard Tower, with a lot of hired swords and big guns surrounding his little island. He has spent a lot of gold and a lot of time hijacking the Orb of Power, a magical artifact of such great power that it will upset the balance of power in the Middle Sea for generations.

THIS IS PART ONE OF TWO Basically the kids navigated around the tower, encountered outposts of mercenaries on the outer ring fo Gordon’s defenses– just mercenaries and gun batteries. This proved to be tough work for the Brothers of Saint Brendan, who dropped off a landing party of four coracles full eagerly rowing Brothers, trying to perform a conversion or two.

The Bone Brigade attacked straight out at full speed and made the base of the tower quickly, but got shot to pieces by missile fire. They did get a major landing party ashore under fire, which is commendable. They were immediately engaged by Tower Guards, and the issue is still in doubt. 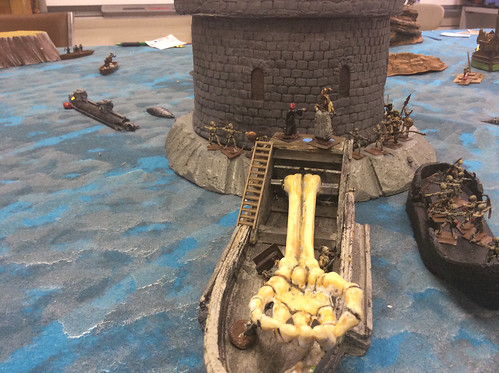 The Wood Elves and the Little People’s Flotilla were slow to come into conflict, just fighting with one battery which was quickly subdued.

The Seng covered a lot of distance and when it became the back of the tower was mined with aquatic mines, effectively used a Spell of Gaseous Form to go over the mines with no harm coming the their ship, the Grey Empress Tzu. 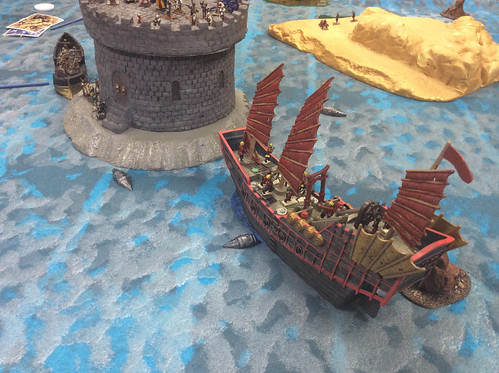 As the game is a bit of a bear to set up, with lots of figures and pieces, we didn’t get started until late, and could only play for 2 and a half hours. I budgeted some extra time to play BDB, and it paid off, we will be running this scenario tomorrow first thing. It’s really heating up to be a fun battle.

Here’s a SLIDESHOW of the BDB Game, enjoy!