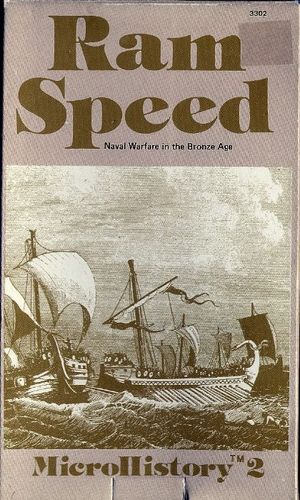 One of my favorite old Metagaming Microhistory games by far is RAM SPEED. Ram Speed was a dirt-simple galley warfare board game designed to play with galley counters on a hex grid.  With not much work or brain power expended, the game mechanics of Ram Speed converted easily to miniatures game play.

I’ve run games of Ram Speed with multiple NAVWAR 1:1200 galleys in play and it worked just fine.  Of course, it would be optimal on a hexmap, if you have one, but converting hexes to inches always worked for me.

I scanned and OCR’d the best of my copies of the original, but this is a game that is over 30 years old now so I had to work at fixing the many typos that cropped up from OCRing old, faded and wrinkled paper rules.  If you find something I missed, be kind and let me know.  The original text wasn’t exactly one of Metagaming’s best efforts, having been typset on an IBM Selectra typewriter.   I also created a new cover for the EPUB version.  The one that is on the historical pocket cardboard box that was the final product has messed up color separation and has always been challenging to read.  My version is in the spirit of the original and is perhaps a tad more easy to read.  Finally, I added a consolidated combat chart from a fan entry on BGG.  I’m also providing links to a re-creating of the game charts from BGG as well, they are much clearer and attractive than the originals.

You can find the Ram Speed Epub (only) on the Digital Rules page. download link is fixed.

(you will need a BGG account to view these)