Warning: I’ve only played it on Easy level so far, so if there’s some advanced parts of this game that aren’t being touched on here, sorry about that!

Back a long while ago, a British company called GAMES WORKSHOP published boardgames. Some of these were fiddly, some were great, some were stupid. ALL of them were pretty macho, full of intricately drawn gaming bits with the dense art style evocative of that era of GW.

One of the less famous games of that era was CHAINSAW WARRIOR. 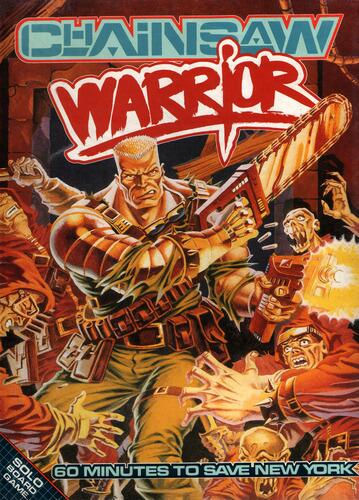 The premise isn’t really that important– you’re fighting a big bad something that has invaded New York City. You’ve got 60 minutes to navigate the streets of New York, encounter all kinds of minor league baddies as you prepare to beat the boss level bad guy. Encounters and locations were simulated using card flips.

Your character could go Hand to Hand or shoot something at the monsters and traps he encounters, or “use Equipment” if you have something appropriate for that situation.

In every respect, the designers are evoking that earlier board game with this design. Encounters are once again done by (virtual) card flips. You roll up a character to fight bad guys (zombies, mostly) on the way to the ultimate bad guy.
If you roll even a half decent character at Easy level, you will plow through zombies in the early game like a hot knife through butter.. or perhaps, like a chainsaw through necrotic tissue. However, damage will add up and you WILL get delayed with meaningless attacks. By end game, you are being attacked far more frequently by more vicious monsters. Even on Easy Level, this game is hard to beat. The level of decision making is essentially “Do I shoot it and waste precious ammo, or go hand to hand with it and risk getting wounded?” for most of the game. They key inputs into the game are character creation, which I found to be disappointing. You go through the charade of rolling dice for each statistic, but it would be the same if you just hit ONE button that says “roll up a sample character” since you can’t reroll anything. The other big decision is what to take with you. Certain items help out a lot in certain situations, but the MOST helpful thing to bring is the chain saw, with some sort of firearm (not sure which is the optimal yet). You can’t buy reloads up front, for some reason, but you get them later in the game. Bring grenades, too.

I put some thoughts together in a video (the company is Auroch Digital, not what I say on here):

I liked the look and feel, which is VERY evocative of the time period and company of that era. However, the game becomes a very repetitive series of encounters with only a few breaks in the tedium here and there as you encounter something even worse. The tempo increases the closer you get to the boss’s location.

It was fun, but nothing great to write home about. I’d give it a 3 out of 5 stars for staying true to theme and not compromising on the interface– there’s not much that can be done about the lack of variety, save adding in some of the material that has been pubished in support of the Boardgame in White Dwarf.

Not the worst game I’ve tried in a long while, but not really my speed. I’ll see myself playing this for a few more days then relegating it to palookaville. Have fun!